The Hatters face Scott Parker’s Fulham under the lights at Craven Cottage this evening aiming to win their second game in a row - and a third in five Sky Bet Championship matches.

With four Championship wins, the Hatters currently occupy 17th position (dropping a place following Millwall's 2-2 draw with Cardiff last night) and are seven places and five points adrift of their counterparts this evening.

Fulham suffered their third loss of the season with defeat at Stoke on Saturday, but remain just two points away from the play-off places.

International supporters will be able to stream and follow the game at Craven Cottage live on iFollow Hatters. Subscribers can also tune into Simon Pitts’ full match commentary as well.

On Fulham’s chances this season: “There is no way I’m sitting here underestimating Fulham, absolutely no chance. They are a top team, I expect them to get promoted. This is one of the most difficult games of the season going to Craven Cottage.

On Aleksandar Mitrovic and other Fulham threats: “He’s probably the one with the most pedigree. An international, scored Premier League goals, a lot of Premier League goals, and he’s a handful. Cairney the same, the two Reids - you could go on and on. They’ve got some really good players, but so have we. We will go there looking forward to the challenge and we will see what happens."

On manager Scott Parker: “He played with a good friend we share – Stuart Balmer – who was at Charlton a long time and I played with him at Wigan and a few other clubs. Stu always speaks really, really well about Scott. You can see his principles in his teams, how he wants to play. With the ball he wants possession and I’ve got great respect for that. To see somebody want to get on the front foot, score goals and win games, especially a British coach, is refreshing."

Relegated from the Premier League last season after beating Aston Villa in the play-off final at Wembley Stadium the campaign prior, Fulham have been FA Cup and Europa League finalists, as well as Football League Division One, Two and Three Champions a total of four times.

Kick-off is 7:45pm at Craven Cottage on Wednesday 23rd October.

The referee for tonight's game is John Brooks – who has taken charge of ten games this season, dishing out 36 yellow cards in the process.

Tickets for this match are sold out.

This match will be the first meeting in almost 20 years between the two teams but the 58th in total.

Luton have won 22 of those, whilst Fulham have the superior record with 28 wins. The two sides have shared seven draws since their first game against each other in 1908.

For midweek matches, supporters in the UK and Ireland can watch the live stream along with overseas viewers. To do so, click here to purchase a £10 match pass so you don't miss a kick! 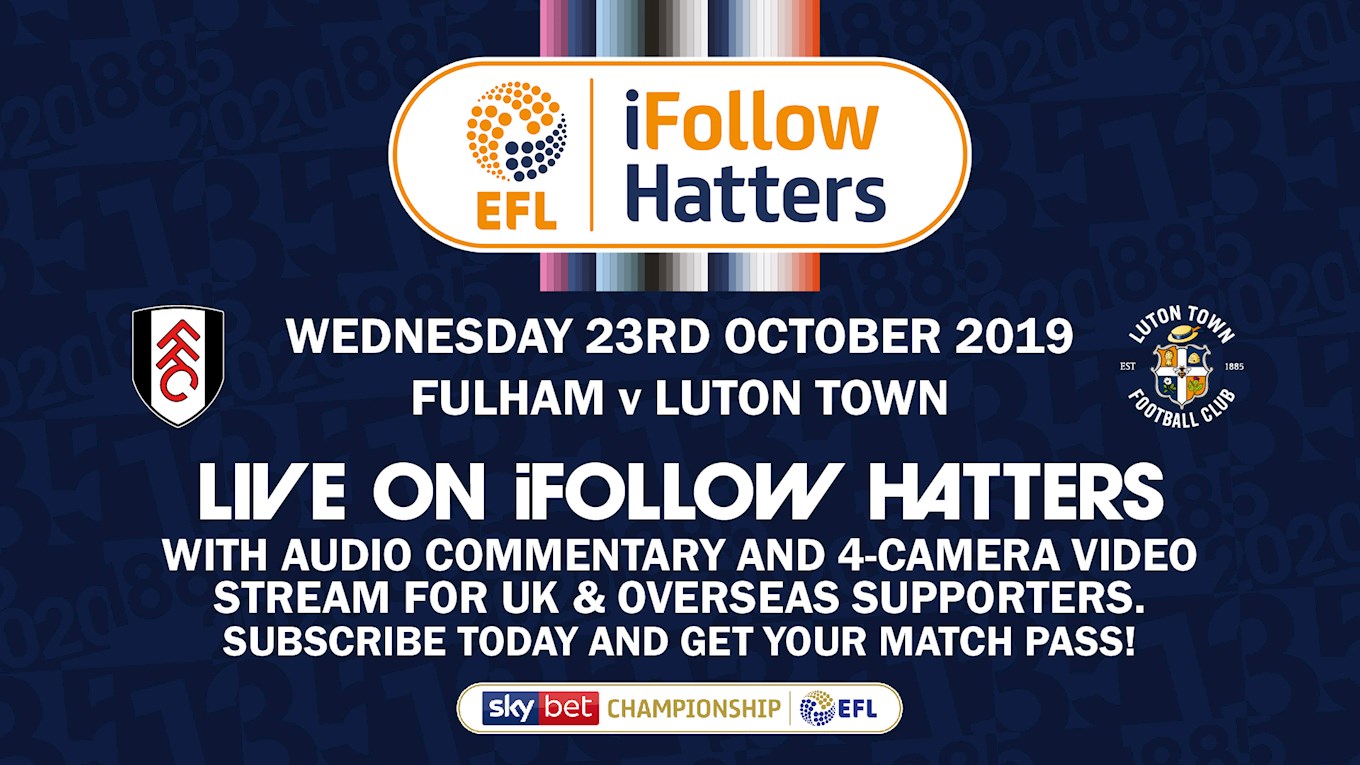