The Hatters are back in action tomorrow afternoon as Graeme Jones’ side welcome Bristol City to Kenilworth Road.

After losing 2-0 against Derby County just before the international break, Town are fully focused on bouncing back in front of a sold-out home crowd.

Prior to the defeat at Pride Park, the Hatters earned four points against Blackburn Rovers and Millwall respectively, form they hope to rekindle.

Bristol City come into the game in good form, having lost just once in their 11 Championship matches so far in the 2019/20 campaign.

They arrive at Kenilworth Road on the back of a 1-0 victory against Reading at Ashton Gate, also knowing a victory could take them top of the Championship.

International supporters will be able to stream and follow the game at Kenilworth Road live on iFollow Hatters. Subscribers can also tune into Simon Pitts’ full match commentary as well.

On Lee Johnson: “I know Lee’s teams really well. I played against him quite a lot as a player. He was a ballsy character as a player. I think he has taken that approach into management, you can see his work, I think he has been there four years in February, you can see his work in his team, which is what you get when you get time in a job – you have to earn the right to get time in a job.

“They have improved on last season and they’re going to be a very difficult opponent tomorrow at Kenilworth Road. We will need to be at our very best, I can tell you that. but we need to make it an intimidating atmosphere, we need the crowd tomorrow, we need a fully committed Luton Town on the pitch and off the pitch because Bristol City are one of the best teams in the league.”

On familiar faces in the Robins’ ranks: “Ashley Williams who I know from my time at Swansea is there. They have got some good players, some really good players and so have we. The Championship is the most competitive league in the world and that means anybody can beat anybody and we have already shown we can compete at this level and we will be ready to do that tomorrow.”

Promoted as League One champions in 2015, Bristol City have remained a Championship side ever since, bettering their league position each season since Lee Johnson took charge. The 38-year-old is striving towards finishing inside the play-off places, having finished just outside in eighth place last season.

Kick-off is 3pm at Kenilworth Road on Saturday 19th October.

The referee for Saturday’s game is Graham Scott – who has taken charge of six games this season, dishing out 18 yellows cards and two reds.

Tickets for this game are sold out.

Luton have faced the Robins 57 times in all competitions, the last time being a 3-1 victory in the first round of the League Cup in 2015.

Bristol City narrowly hold the upper hand with 21 wins, Luton have 19 wins and the two have shared drawn 17 times.

· The Hatters Hideout – FIFA 20, table football, board games and arts and crafts are just a few items to enjoy in our family room.

· Outside Family Zone – new for season 19/20, our outside family zone has been renovated to create a place for families to eat and play games. It is also home to our Happy Harry Shack, which sells a range of refreshments and pocket money retail items.

· Library Scheme – new for season 19/20, Junior Hatters can sign up to our free library scheme, with access to a range of new and used books.

· Happy Harry Lunch Bags – available for pre-order so lunch is all sorted ahead of the game!

· Ispy Sheets – there are two versions of ispy sheets for our Junior Hatters to try and complete on their visit to Kenilworth Stadium. Ispy sheets can be found in the Hatters Hideout or are available to download via the Junior Hatters webpage.

Town produced a brilliant performance to beat Bristol City 3-0 at Kenilworth Road, handing the visitors their first league defeat since the opening day in front of a sell-out crowd.

Pelly-Ruddock Mpanzu opened the scoring in the 56th minute with an outstanding curling effort and six minutes later Harry Cornick scored his fourth goal of the season.

In the 95th minute, the Robins' centre-half Ashley Williams diverted the ball into his own net, which sealed all three points as Town moved up into 16th place in the Championship.

The first 20 minutes set the tone for an enthralling encounter, an open game which Luton took control of after a few Bristol City chances.

The Robins had two opportunities in the space of two minutes, both of which fell to Tommy Rowe.

First the left-wing-back forced James Shea into a good save from distance and then moments later tried to go around the keeper, before chipping over the bar from a tight angle.

Town were next to venture forward and went very close to scoring the first goal. Izzy Brown did well to carry the ball through midfield and find Dan Potts available in plenty of space on the left.

The left-back then crossed the ball, which Collins tried to direct goal-wards, but it was deflected just wide of the post and behind for a corner.

Pressure from the Hatters didn’t end there. Matty Pearson carried the ball forward and found Brown with space in-behind, the midfielder then passed to Ryan Tunnicliffe, but his effort was gathered by Bentley.

Luton’s best chance of the half came just before the 30 minute mark as Mpanzu set the ball for Brown, who from the edge of the box, produced a fierce shot which Bentley tipped onto the post.

Mpanzu then went close himself just before half-time but his low drive from the edge of the box was parried behind for a corner.

The second half started with much the same intensity, but Luton’s pressure finally paid off as Mpanzu opened the scoring in the 56th minute.

After winning possession back from the Robins, Town moved forward swiftly and ball found its way out wide on the left to the midfielder, who cut in and unleashed a brilliant, curling effort straight into the top corner.

The 26-year-old’s cracker was his first goal in the Championship, meaning he has now scored for Luton in four different divisions since arriving in the Conference title-winning season from West Ham.

In the 62nd minute, the home crowd were on their feet again as Harry Cornick doubled Town’s lead. Brown played a perfectly timed ball in-behind for the forward to run onto and Cornick produced a calm finish to score his fourth goal of the campaign.

Bristol City were pushing to get back into the game but James Shea – who made his first league appearance of the season – was on hand to keep the clean sheet intact.

It was two Robins substitutes – Niclas Eliasson and Rodri – who linked up, but the latter’s glancing header was saved well down low by Shea, who tipped the ball onto the post.

With just over 15 minutes to go, Luton quickly scurried forward trying to seal all three points, which Collins came agonisingly close to doing.

Cornick switched the ball across the pitch and found Brown, who knocked the ball forward to Collins but the onrushing Bentley saved one-on-one.

Adding to the visitor’s despair and the home crowd’s jubilation, Rodri was denied a debut goal as his effort was ruled out for offside in the dying embers.

With the last attack of the game, Luton scored their third as Tunnicliffe’s cross was put into the back of the net by Ashley Williams, rounding off a superb day for the Hatters which marks their biggest Championship victory to date.

Season ticket holders can trade in their match ticket for this weekend, and will receive a voucher to use at the club shop, or at food and drink kiosks around the ground at future games – their vacated seat can then be taken by another supporter.

If you would like to find out more information on this, please contact the Ticket Office on 01582 416976 or visit them in person.


Tickets for the Hatters’ Sky Bet Championship match against Bristol City on Saturday 19th October have now sold out. 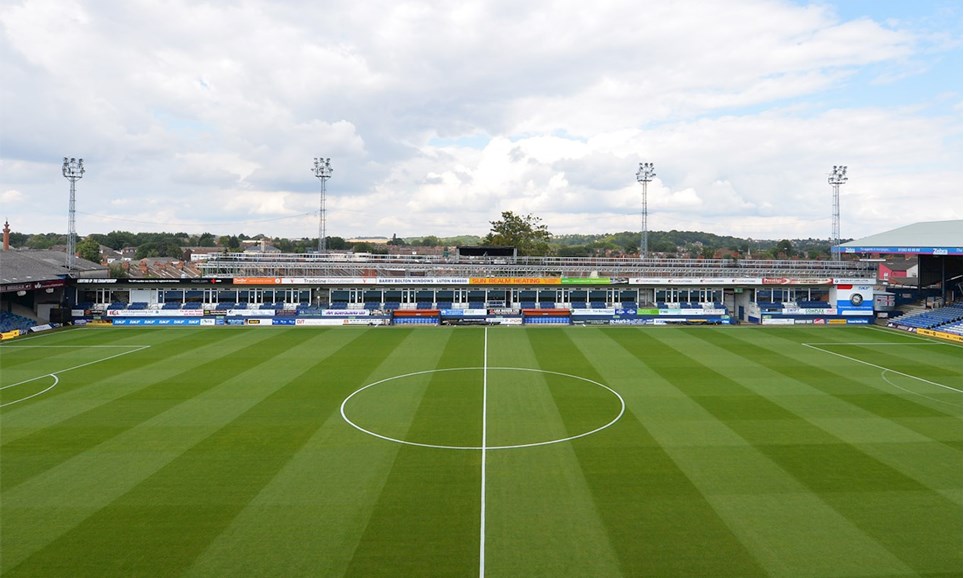