Tomorrow afternoon sees the third of our classic clashes from the past shown as if live on iFollow Hatters Gold - and this time it's the 11-goal thriller with Oxford United in the old First Division from 6th February 1988.

It was a season that would end in glory at Wembley for the Town as manager Ray Harford led his side to Littlewoods Cup final success over Arsenal.

But this clash with Oxford, who the Hatters had already beaten 5-2 away the previous September, was the precursor to the two-legged Littlewoods Cup semi-final that would kick-off at the Manor Ground just four days later.

Please log on here again at 3pm to enjoy the action as you would on a normal Saturday matchday. Our Twitter feed @LutonTown will also be updating supporters of the action from the plastic pitch, although you'll have to pause the stream for a 15-minute break at half-time to keep the tweets in realtime.

Just to add to the flavour of a matchday at Kenilworth Road, we have prepared a special pack for supporters to download in the morning to help recreate at home what should have been our final Family Fun Day of the season at the postponed Reading match, so please pay us a visit early doors.

You will also be able to read the matchday programme from midday and enjoy the usual build-up to kick-off at the Kenny.

There will also be a special post-match interview with Town legend Mick Harford. For now though, please enjoy the England 'B' international's column from the programme which detailed the new contract he'd just signed, as he explained how baby son William's arrival had made him settled in the area (click on the image to open up a pdf for easier reading)... 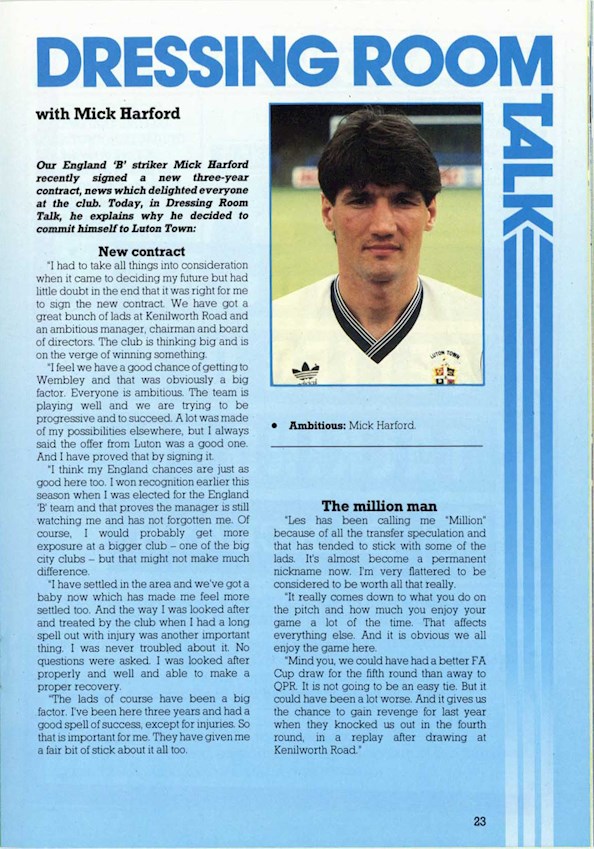