The Hatters were crowned champions of Sky Bet League One this afternoon, defeating Oxford United 3-1 to end this record-breaking season unbeaten at Kenilworth Road.

A George Moncur brace and a top strike from Elliot Lee was enough to see off the U’s who managed to notch a goal when Garbutt pounced on a loose ball.

The Hatters ended the campaign on 94 points, three in front of Barnsley in second spot. The sea of orange in the home ends of the ground were in fine voice throughout this afternoon’s encounter, creating the perfect atmosphere for the champions to play in front of.

For the final time, Mick Harford named his starting 11 to end the campaign. Alan McCormack came back into midfield after time out with an injury and George Moncur reclaimed his starting spot after some good spells off the bench.

It only took three minutes for the Hatters to get themselves in front, Moncur doing what he does best, curling another fine free kick in from 25 yards. Simon Eastwood in the Oxford goal could only fall to his knees and watch as the ball flew past him into the bottom right corner.

Elliot Lee then misplaced a pass that James Henry collected. Henry played it to Jamie Mackie who was through. Shea got down well to his right at full stretch and stopped the effort though, keeping the score in the home side’s favour.

Moncur was up to his usual tricks a little later when he was gifted another free kick outside the Oxford penalty box following a foul on Pelly-Ruddock Mpanzu. This time the midfielder picked out the top left corner but couldn’t get it the right side of the post. The Kenilworth Road end thought it was in.

Both sides took their time settling into the match. The Hatters were playing some nice football, but the visitors were standing up to the pressure well, making it difficult for the Town who were looking to calve out a chance. The visitors were proving why they were unbeaten in nine coming into this fixture.

A chance eventually did come on 30 minutes, James Collins latching on the end of a cross and firing a volley at Eastwood who managed to keep it out. Moncur picked it up and placed it in the danger area where Lee was waiting to scoop another shot at goal but eventually the danger was dealt with.

McCormack slotted back into the holding midfielder role well this afternoon, keeping an eye on a well-organised Oxford side who were playing some good football of their own. Marcus Browne found an opening for the U’s, easing his way past Justin to force another good save from Shea, just about gathering the shot that was heading towards the top right corner.

Justin had a go from 30 yards but was never going to beat the keeper, not fully getting behind it as it sailed through into the arms of Eastwood. Mpanzu flashed a low cross into the area just asking to be tapped in after cleverly taking it around Sam Long. That was to be the last action of a fairly even first half.

Shinnie created the first Hatters chance of the second period, looping the ball over the head of Cameron Brannagan, managing to play it wide to Lee who stung the palms of Eastwood low at his near post. Lee got it right a minute later though, this time Moncur slotting it wide to the forward who curled a beauty into the top right corner, making it 2-0, with one hand on the champion’s trophy.

The visitors pulled one back though, snatching that hand away to complicate matters. The substitute Gavin Whyte threaded a well-weighted pass through to Browne who hit a shot across Shea’s goal. The home fans thought he’d missed when it bounced back off the post, but Garbutt was there to tuck a low effort into the unguarded net.

Mpanzu won a corner just afterwards when Eastwood tipped his effort over. Pearson rose highest at the corner and directed a good header towards the bottom right corner, but Eastwood was there again to tip it wide.

Shea made a crucial save with his legs moments later when Brannagan released Whyte but he couldn’t quite squeeze his shot under Shea at the near post, who made himself big and kept the Town in front.

The visitors began to play their way back into the contest, Browne had a go from distance but couldn’t get his shot past the Hatters back line. The U’s were pushing men forward in search of the equaliser, but eventually left themselves short at the back to allow the Town in.

Harry Cornick was introduced with 20 minutes to go and instantly made an impact, causing trouble in the Oxford penalty box. Moncur picked the ball up in his own half and powered his way forward. Cornick received it and took it wide; his shot was dealt with by the Oxford goalkeeper but Moncur was there to pounce on the loose ball and restore the two-goal advantage. The party atmosphere was well and truly underway.

As the match entered the final ten minutes, the home side began to take their time and slowed the match down, putting both hands on the trophy this time, clutching even tighter, determined not to let the the U’s force them off this time.

Berry hit a tame effort at Eastwood in stoppage time but by then, the title had been claimed. The Hatters were returning to the second tier of English football as champions. 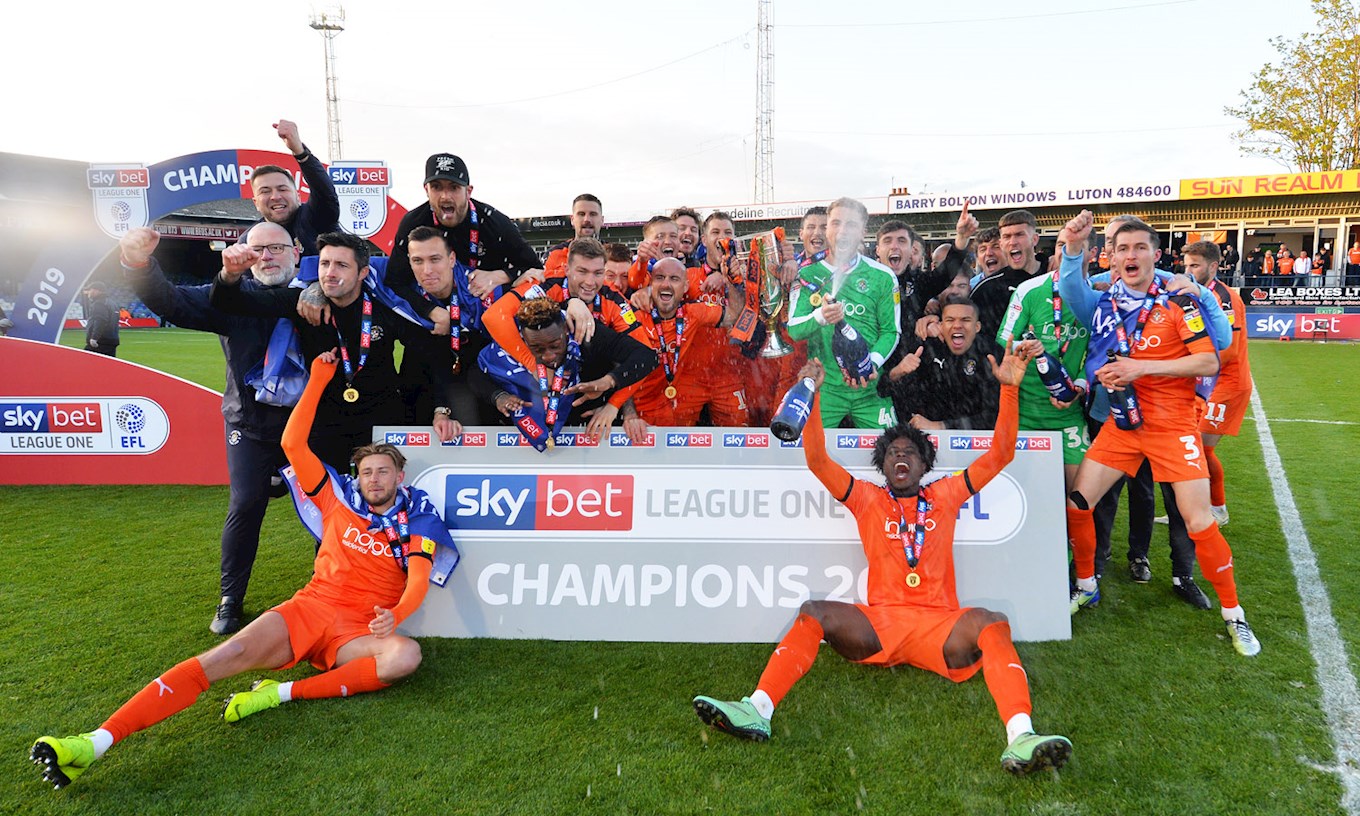