Could you imagine a banner in the Kuip (Feyenoord Stadium) with the text “Praise the board”? At the English Luton Town FC nobody is surprised about a banner with the text “Praise the board”. A clever variation on “Praise the Lord”. At the League One club, supporters are worshipping the club management, and both work closely together to put Luton Town FC (LTFC) on the football map. For FSV (Supporters Association) De Feijenoorder, the developments in Luton were a cause to organise a supporters’ trip.

What started twenty years ago with a chance meeting between a Feyenoord supporter and an English tourist visiting corn mill De Distilleerketel in the Netherlands, saw a new highlight at the beginning of March: The supporters’ trip of FSV De Feijenoorder to Luton Town FC. The Rotterdam Hatters, a small group of people from Rotterdam that has been visiting a number of Luton Town FC (nickname ‘The Hatters’) games every season for years, were also in attendance. The almost fifty enthusiasts who travelled to England with FSV De Feijenoorder, watched the game Luton Town FC-Rochdale, but more about that later.

Luton Town owes its nickname “The Hatters” to a period in which the town of Luton was highly regarded in the millinery industry. This era has long gone, and there is little in the British industrial town that reminds of the golden years of centuries ago. Luton, 50 kilometres north of London, has almost 200,000 residents and is poor. Three years ago, Luton was nominated by Reddit users as the “worst place in the United Kingdom”.

However, Luton Town FC supporters still pride themselves in their nickname “The Hatters”. Banners, T-shirts and hats still sport “COYH”, in short: “Come on You Hatters”.

On Friday night, our group boards the Stena Line ferry in Hook of Holland which will bring us to Harwich. We leave around 10pm and the group chooses a strategic seat quite close to the bar. Beer is abundant. Disciplined as we are, we go to our cabins in good time to wake up fresh and full of beans in the morning. We leave the ship and travel on to Luton by coach. En route, Paul Ballantyne, Director of Luton Town FC, joins the group. Paul is the Englishman who met Feyenoord fan Peter Paul twenty years ago. A friendship blossomed between the two, and ever since, they are crossing the channel on a regular basis to visit Feyenoord and Luton respectively.

On our way to Luton, we pass Newlands, a plot of land on the outskirts of town that has been left to the club in his will by an LTFC supporter (www.lutontown.co.uk editor’s note – the family of former club owner Mike Watson-Challis gave approval for the club to acquire the land from the family’s trust). Under management of the club, this land will be developed, and the revenue is going to be used by the club to build a new stadium that should be completed by 2023. To the question why the club does not build the new stadium on Newlands, Paul’s answer is clear: “Our supporters want a stadium in and not outside of town”. When we drive past the training complex of Luton Town, this elicits the question from one of the Feyenoord fans on the coach if supporters of Luton Town actually are allowed to go there...

TROUBLE AT THE TOP

BETRAYED BY THE FA

And as if the problems were not big enough, the club had to cope with another disappointment in 2008. When the FA and Football League deduct 10 and 20 points respectively from the club for financial irregularities in the years before, Luton Town starts the season with a disadvantage of 30(!) points.  When Luton Town is demoted three times in a row, it finally drops out of the Football League and continues as a non-league club, so basically amateurs. You’re not a Luton Town supporter for the fun of it. In 2004, Luton Town became the champion of the Conference National and returned to League Two. Owing to a second place in League Two, the Hatters were promoted to League One in 2018. At the moment, they are top of the rankings there and this spring, Luton Town hopes to be promoted to the Football League Championship. In the stadium, where Luton Town has played its games since 1905, a massive banner with the text “BETRAYED BY THE FA 2008” reminds of the penalty imposed on the club that year by the Football Association.

Not only is the banner about this betrayal allowed by the club, it is honoured and protected by the club management. It will be moved to the new stadium and will be given a nice spot. Just imagine that Feyenoord supporters in De Kuip would hang a banner with “KNVB traitors” or “UEFA mafia”. How long would the club management leave it there? That is, if it would make it inside the stadium at all. Luton Town’s past helps to better understand the current situation of the club and its supporters.

We deviate from the programme to visit the Bricklayers Arms Pub as early as 10.15 am. The pub opens early especially for this foreign visit. There are no objections to the change of programme, and soon, the tap is running overtime. In the pub, we speak to Tony Murray of the Luton Town Supporters’ Trust, the body that protects and decides about the club name, club logo and club colours. The Supporters’ Trust has 500 members who pay £10 each per year and has cash resources of £30,000. Tony tells us about the excellent relationship with the club management. They meet on a regular basis. The Supporters’ Trust also has a share in the club. When we ask Tony how the relationship with the club is and whether the Supporters’ Trust feels taken seriously by the club, he says: “We feel listened to”.

The pub visit makes us hungry and so, before heading off to the stadium, we are enjoying a traditional English breakfast in a nearby lunchroom. 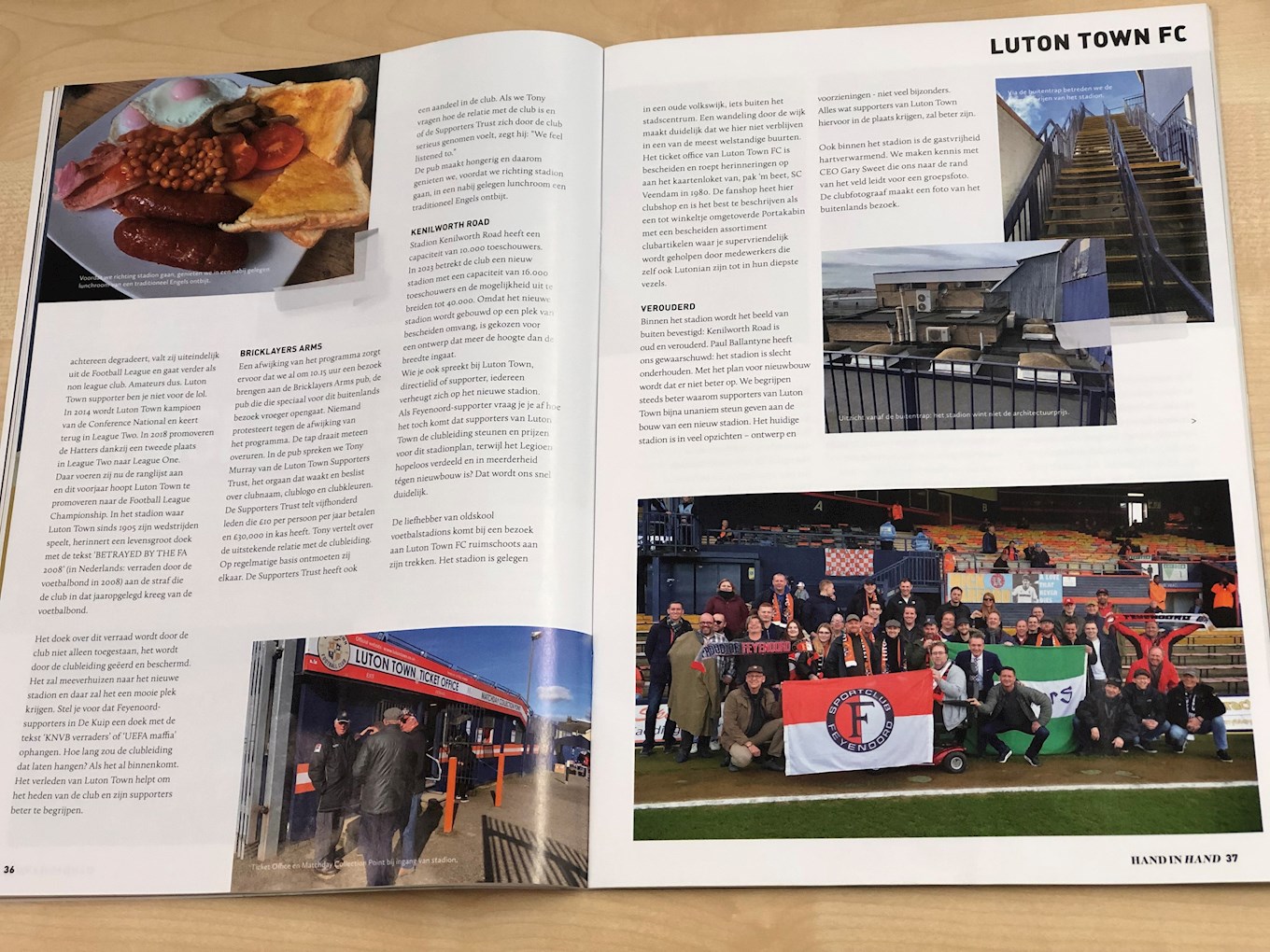 Kenilworth Road Stadium has a capacity of , spectators. In 2023, the club will move into a new stadium with a capacity of 17,500 and an option to extend this to 40,000 spectators. Because the new stadium is built on a modestly sized site, a design was chosen that goes upwards instead of sideways.

Whoever you’re talking to at Luton Town, board member or supporter, everyone is looking forward to the new stadium. As a Feyenoord supporter, you wonder why it is that supporters of Luton Town support and praise the club management for this stadium plan, while the Legion (Feyenoord) is hopelessly divided and overwhelmingly against new built? This becomes clear quite quickly.

Those who love old school football stadiums will enjoy a visit to Luton Town FC very much. The stadium is located in an old working-class area, just outside of the city centre. A walk through the area makes clear that this is not one of the most affluent neighbourhoods. Luton Town FC’s ticket office is modest and brings back memories of, for instance, SC Veendam in the 1980s. The fan shop is called “Club Shop” here and can be best described as a portacabin turned into a little shop with a modest range of club items, where you are served super friendly by employees who are themselves Lutonians through and through.

In the stadium, the impression you get from the outside is confirmed. Kenilworth Road is old and outdated. Paul Ballantyne has warned us: the stadium has been badly maintained. And with a new build in the planning, this will not get any better. Now it makes more sense to us why supporters of Luton Town give almost unanimous support to the construction of a new stadium. The current stadium is in many respects – lay-out and facilities – not very special. Anything that will replace it, will be an improvement for Luton Town supporters.

Inside the stadium, the hospitality is heart-warming as well. We meet CEO Gary Sweet who takes us to the edge of the field for a group photo. The club photographer takes a picture of the foreign visitors.

The stadium has a mishmash of benches and chairs in various colours. The seats are so tight that we choose to watch the game standing. A number of stewards tell us that this is officially not allowed. If the FA would see pictures of supporters standing in the stadium, this could result in a hefty penalty, so we’re told. After some insisting, we are pointed to a dark corner somewhere at the back of the stadium. It is OK for us to stand there and that is what we’re doing. Our view from that spot makes us laugh. Lots of poles interrupt our view, and we cannot see the touch-line. To complete the picture, the field has quite a few bald patches. What strikes us is that the stands are almost completely taken by indigenous spectators, although Luton is home to a high percentage of ethnic minorities. 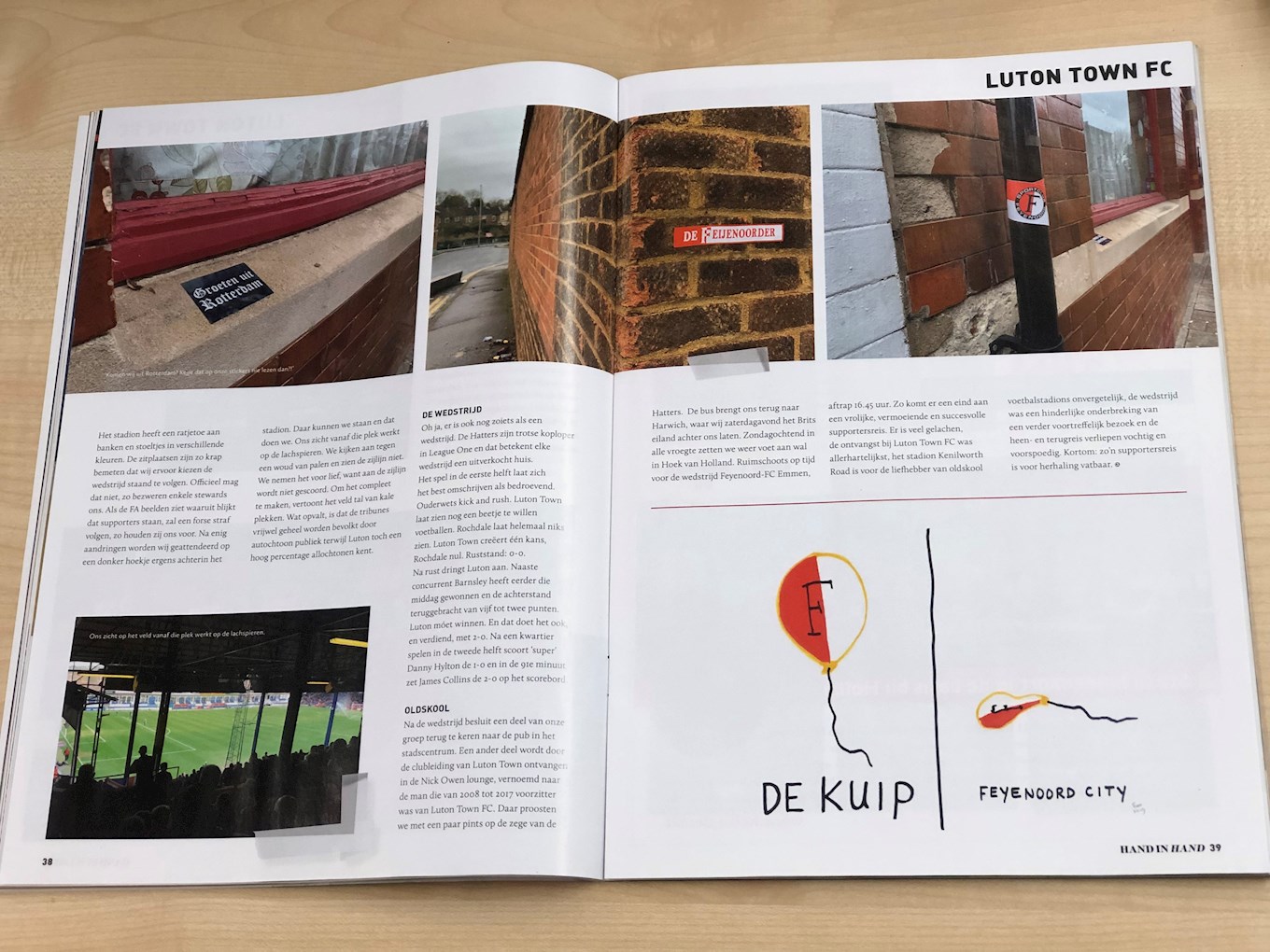 Oh, yes, we almost forgot the game. The Hatters are proud leaders in League One and that means a full house every game. The gameplay in the first half can be best described as a sorry sight. Old-fashioned kick and rush. Luton Town shows that it wants to play football. Rochdale does not show anything. Luton Town creates one chance. Rochdale absolutely none. The score at halftime: 0-0. After the break, Luton starts pushing. Nearby competitor Barnsley won earlier that afternoon and reduced the disadvantage from five to two points. Luton must win, and it does, and deservedly so, by 2-0. After a quarter of an hour play in the second half ‘super’ Danny Hylton scores the 1-0 and in the 91st minute James Collins puts 2-0 on the scoreboard.

After the game, a part of our group decides to return to the pub in the city centre. Another part is welcomed by club management in the Nick Owen lounge, named after the man who was chairman of Luton Town FC from 2008 to 2017. Here we celebrate the Hatters’ victory with a couple of pints. Then, the coach drives us back to Harwich, where we leave the British Isles behind us that night. Sunday morning early, we set foot on land in Hook of Holland, in ample time for the Feyenoord-FC Emmen game, kick-off: 4.45 pm. This is the end of our happy, tiring and successful supporters’ trip. We have laughed a lot. The welcome at Luton Town FC was very friendly, the Kenilworth Road stadium is unforgettable for lovers of old school, the game was an annoying interruption of an otherwise excellent visit and the return trip was liquid and smooth. So all in all, a supporter’s trip that is certainly worth repeating.

*This article has been translated from Dutch into English, having first appeared in the April edition of the official Feyenoord supporters' magazine 'Hand In Hand'. The views expressed are those of the author and not those of Luton Town FC.