Graeme Jones spoke glowingly of Simon Sluga as he reflected on the start of the season, the midweek defeat at Sheffield Wednesday and the Croatian keeper’s call-up by his national side this week during his pre-Barnsley Press conference at The Brache today.

Sluga will join up with the World Cup runners-up for their Euro 2020 qualifiers against Slovakia and Azerbaijan next month, once the Town have completed the next three fixtures against Barnsley, Cardiff and Huddersfield.

Asked whether it was a boost for the 26-year-old, Jones responded: “Yes, it is. The Croatia national team. They got to a World Cup final. It’s big business.

Jones reiterated his stance that he is delighted with how Sluga is adapting to English football, saying he focuses solely on the many positives of his performances so far, with the keeper in fine form in midweek. 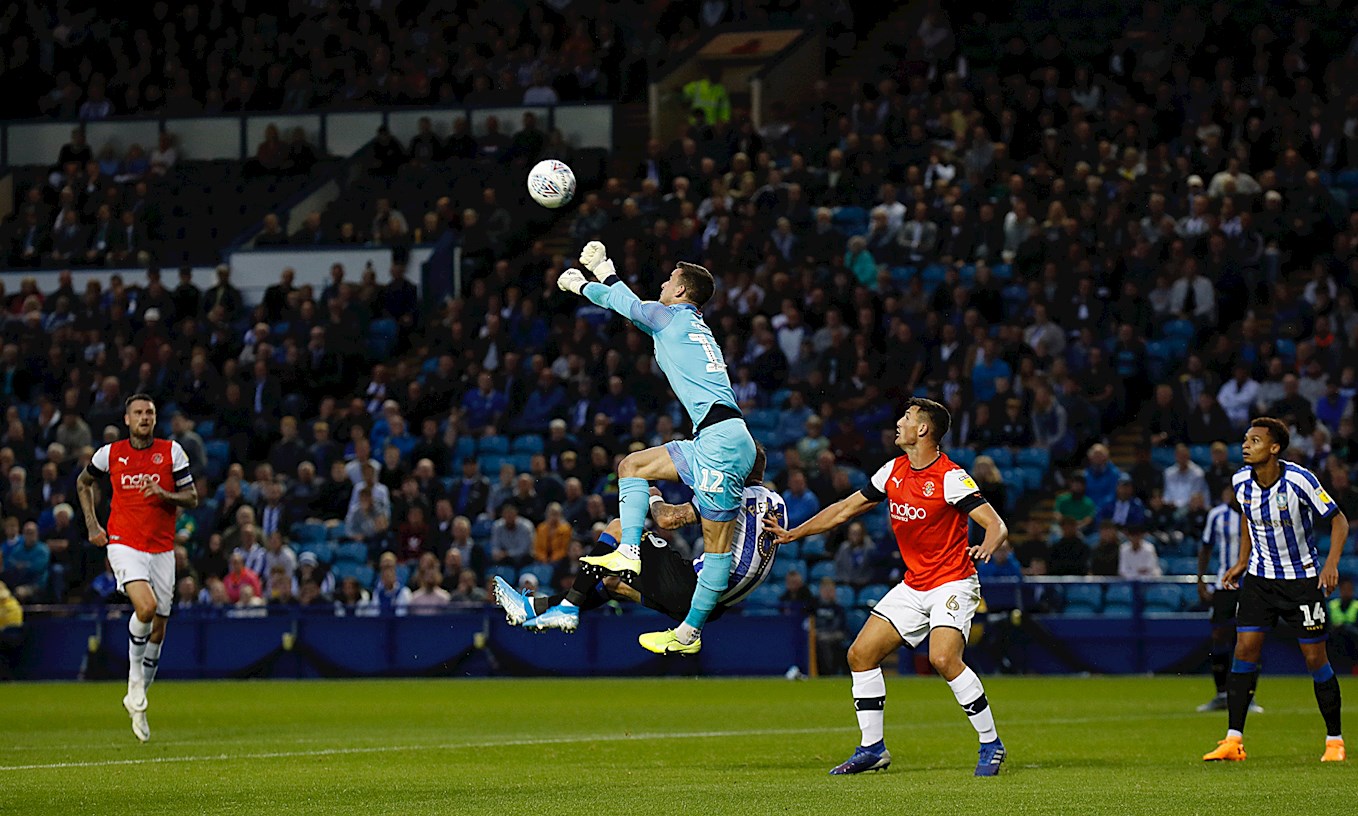 “His performance at Hillsborough for 90 minutes was excellent," said the manager. "We are talking about half a yard. Even the decision is not wrong (throwing the ball to Ryan Tunnicliffe in the build-up to Wednesday’s goal).

“We are talking about the execution of a decision and I can think of an instance the previous game against West Brom where he over-rolls a ball for Pelly-Ruddock, with a throw and we get caught a little bit. Maybe he under-threw that (on Tuesday) because that was in his mind.

“He’s getting punished for the smallest detail and it’s very unfair. He’s improved in every single game that he’s played in and we are talking about half a yard here.”

On the injury front, Jones confirmed that defender Martin Cranie was going for a scan this afternoon to assess the damage to his knee that saw him carried off on a stretcher at Hillsborough.

“I’m hopeful really at this stage, because of the lack of swelling, but obviously a scan can reveal things that nobody can see on the eye, so I still don’t want to speak too soon until I get the scan results,” said the gaffer.

He believes that Dan Potts, Callum McManaman and Brendan Galloway are all close to being available for selection again, with Luke Berry training this morning after missing the West Brom and Wednesday games with a groin problem.

Striker Danny Hylton will be missing for a few more weeks, however, after undergoing an operation to tidy up a knee problem.

“Danny’s been brilliant,” added Jones. “He’s the hardest working pro you’ll meet in your life, with desire coming out of his ears and sometimes it’s to his detriment. He pushes himself really hard.

“He’s had to have a clear-out today, so we won’t be seeing Danny for a while, which is obviously a bit frustrating because Danny gives you a level of commitment and quality, so it’s been a bit of a set-back.” 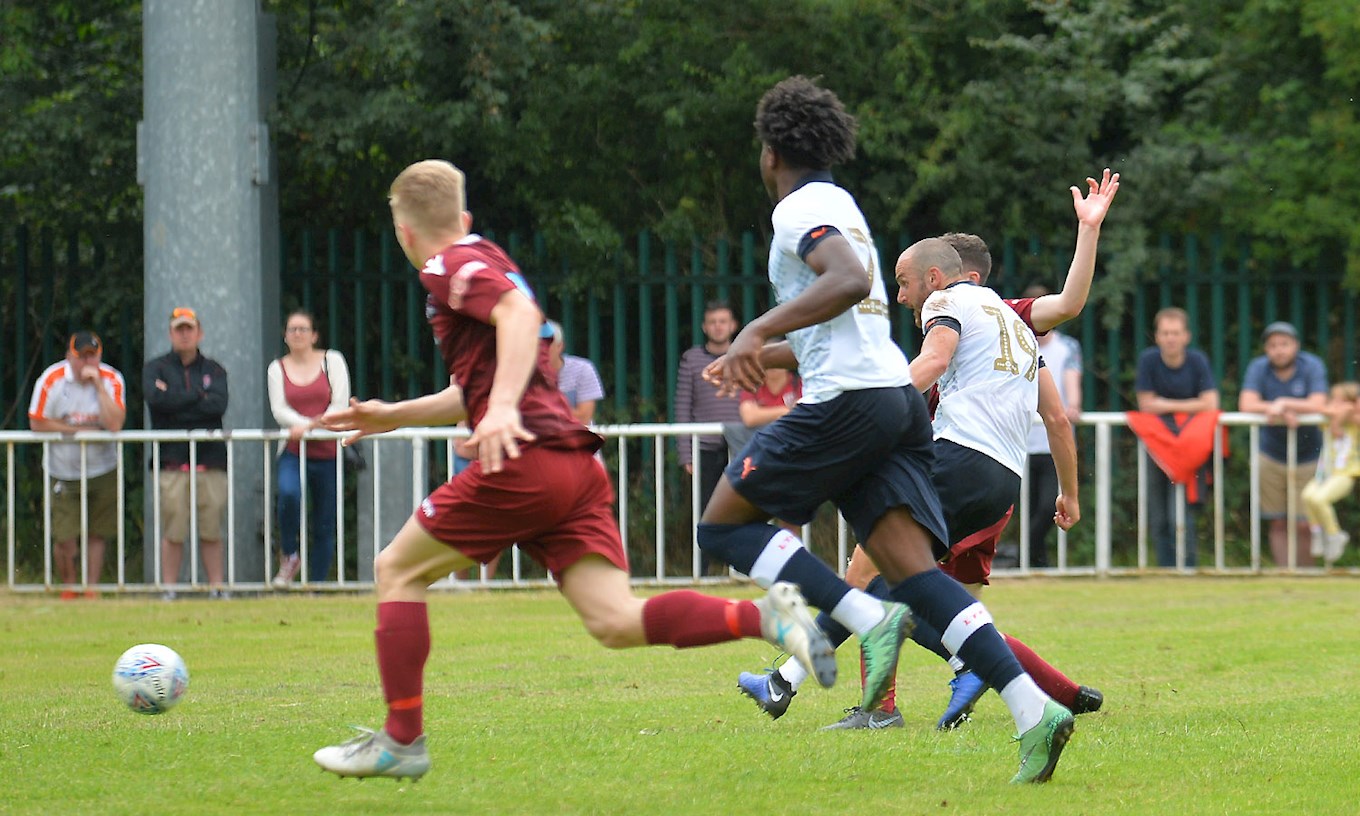 The gaffer, a former striker himself who played into his mid-30s, said Hylton (pictured above scoring against Welwyn Garden City in pre-season) might need to change his style of training to help himself stay fit.

“He can score goals, Danny,” Jones continued. “He’s a grafter and he works his backside off. What I love about Danny is he wants to play football. He’s totally committed, it’s his whole life and people like that, it’s very difficult to try and hold them back, but he’s 30 and he has to train smart.

“Rather than training hard all the time, you have to train smart as your body changes, and Danny is in that category. We are trying to find a formula that works for him.”