Together with his former AFC Wimbledon team-mates Deji Oshilaja  and Darius Charles (now Wycombe) and Colchester United's Luke Prosser, the Town goalie played his part in surprising football fans and commuters by taking centre stage at a special temporary installation on the King’s Cross station concourse, on behalf of the English Football League (EFL) and its charity partner, the mental health charity Mind.

The four players each spent two hours within the live exhibit posing as footballers with visible and invisible health problems, in full view of passengers within the station. To highlight the key 1 in 4 statistic, three of the footballers demonstrated clearly physical health problems, whilst the remaining player (James in the pictures) who on the face of it appeared unhurt, represented the fact that you can also experience problems with your mental health and that, although these can’t always be seen, they should be treated with equal importance. 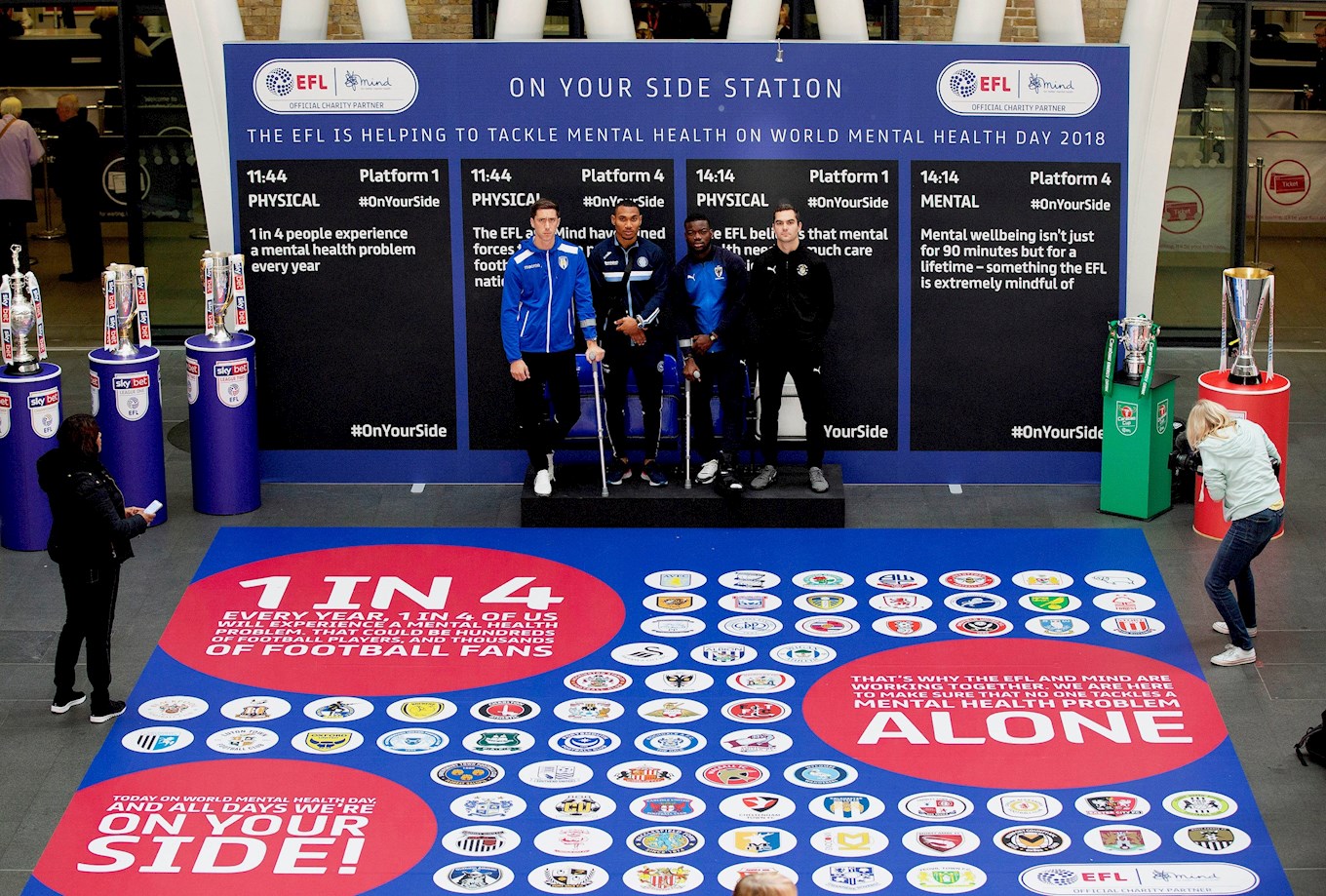 James then spoke to national media about how another of his former team-mates at Wimbledon, fellow goalkeeper Ryan Clarke, had suffered with depression (which he spoke about in a recent interview) while they were together at Kingsmeadow, and also how his own family had been affected by depression and anxiety.

The exhibition, which will remain open throughout World Mental Health Day, highlights that every year dozens of EFL managers, hundreds of EFL footballers, and hundreds of thousands of EFL club supporters will be living with a mental health problem, many of them feeling unable to reach out for support.

Kings Cross station, the location of today’s exhibit, will see millions of football fans pass through its barriers this season, with train travel remaining the second most popular mode of travel for supporters. Echoing the 1 in 4 people who experience mental health problems, EFL’s own research shows that 1 in 4 fans rely on train travel to attend away fixtures in the Sky Bet Championship, or Sky Bet League One and League Two.

The activity comes as part of a football season in which EFL and Mind have joined forces in a pioneering partnership that seeks to use the power of football to improve the nation’s mental health. Throughout the current 2018/19 football campaign, the players of all 72 EFL clubs from the Sky Bet Championship through to League Two are wearing the Mind logo on the back of their matchday shirts, the first time that player names have incorporated a charity logo. 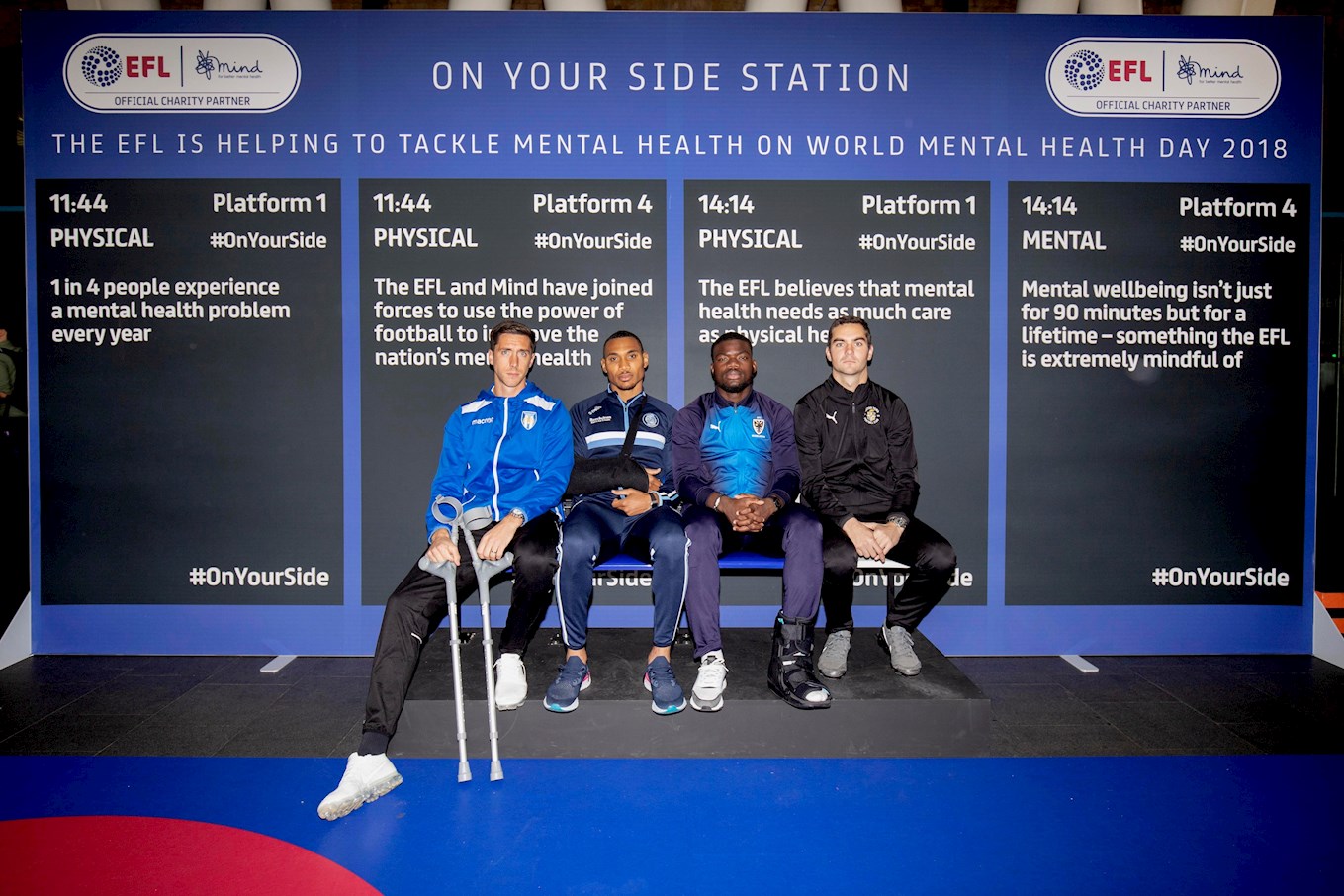 Today, thousands of people passing through Kings Cross station will be able to visit and learn more about Mind, and their charity partnership with EFL.

Debbie Jevans, Interim Chair of the EFL said: “Every day throughout the year the EFL, through its 72 Clubs and their support staff ensure players improve and maintain their physical health. The focus on mental health should be no different and every year 1 in 4 of us will experience a mental health problem. With 1 in 4 EFL supporters using train travel to attend matches we chose Kings Cross Station to highlight the need to raise awareness of the challenges around mental health and the work the EFL and its charity partner, Mind will be doing to offer help and support those in need.”

Paul Farmer, CEO of Mind, said: “We all have mental health just as we have physical health and both are equally important to look after. Whether you’re a star striker or season ticket-holder you shouldn’t have to live in fear about opening up and getting support for either your physical or mental health. We’re delighted to have joined with the EFL to create the On Your Side charity Partnership to make sure that no one has to tackle a mental health problem alone. Today, on World Mental Health Day, and all days, Mind and the EFL are On Your Side."

Supporters can find out more by visiting EFL.com