These programme notes were written by Head of the Hatters Community Trust Kevin Thoburn, for the Grimsby Town edition of This Is Our Town.

Luton Town FC Community Trust in partnership with Luton Council, and global charitable organisation 'Football for Peace', have agreed to deliver a project across the Town that uses the power of football to encourage dialogue and unite young people to create greater mutual understanding and respect across communities.

The holidays are a very busy time of the year for everyone, and especially our first team squad who have four games in ten days to prepare for, along with trying to fit in all of the other traditional Christmas player duties including visits to local hospitals and charities etc.

So, we were particularly happy to welcome Alan McCormack and Lawson D'Ath to our last Adult Disability football training session of the year at Inspire Sports Village in Stopsley last week. Both of our disability teams are currently training indoors every Friday during the league winter break, preparing with real dedication for the new season to begin in March next year.

It was great for Alan and Lawson to watch the guys train with such dedication and enthusiasm, and it was also great for all of our disability footballers who got a real kick out of showing off their skills to our first team players.

Once training was over it was also time to hand out Christmas presents to everyone to finish off a training session that everyone would remember.
We hear there was lots of singing and chanting as well, as both squads showed their appreciation to the players.

It has been a good season for the players with one of our squads winning the Beds FA Ability Counts Champions League Cup, which we presented to the squad at the Cambridge game recently.

As always, the boys received a great reception from our supporters, but special mention to the Cambridge supporters who despite being 4-0 down, still gave our boys a great reception. A demonstration of the power of football to bring out the best in people and connect communities. 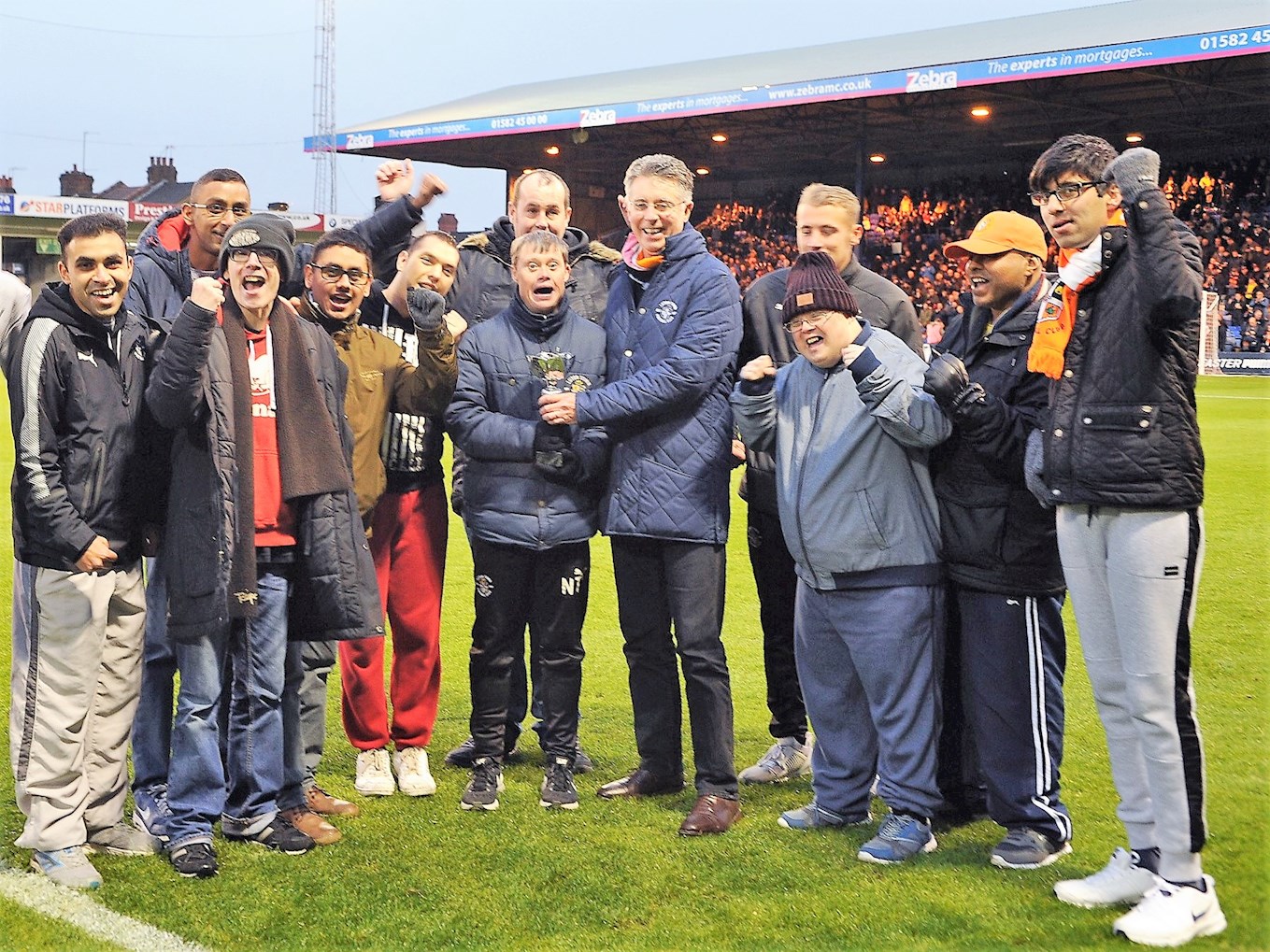 We run lots of both football and multi sports sessions during the week as part of our every player counts programme, sponsored by the EFL Trust and Wembley national Stadium Trust, and if you know someone with a learning disability who you think might like to get involved, then please give us a call at the community office on 01582 561622 or drop us an email at everyplayercounts@lutontown.co.uk

EFL Trust U11 Kids six-a-side Cup - Your chance to play at Wembley Stadium and Kenilworth Road!

Over 50 schools have taken part this year with Pirton Hill, Sacred Heart, Whitefields, St Josephs, St Margarets and the Meads from Luton, Alban Academy, Lincroft and Castle Newnham from Bedford, and Priory from Dunstable all making the finals to be held next month, with the two eventual winners then battling it out here at Luton Town FC for the right to represent the Hatters in the regional competition.

Our Luton qualifying tournament saw over 30 schools involved and there was great excitement when the Premier League brought along their PL Trophy to promote the work the Trust are currently involved in through the national PL Primary Stars project.

Currently over 20 schools each week are receiving Reading, Numeracy or PSHE lessons in Bedfordshire as part of the project, which also involves our coaches improving PE delivery through our mentoring programme for school staff who may not be that confident in the delivery of the subject.

Even more excitement was topped off when Glen Rea and Luke Gambin turned up to present winners' medals to the qualifiers. The six-a-side competition for U11 school children will culminate in three finals across the EFL play-off weekends in May. All 72 EFL clubs are first split into three divisions, and in line with our divisional status we will compete in the League Division Two, before being again split into two groups, north and south– so our local winners will progress as Luton Town FC into the Division Two South play-offs.

The winners of the Div Two North and Div Two South finals will then qualify for the chance to play before the League Two play-off final at Wembley in May.