The Luton based charity, who provide hospice care for adults and children with life-limiting and terminal illnesses, complete the roster of the Club's official charity partners for 2017-18, joining Club charity of the year Transitions UK and the players' charity of the year Families United Network.

Keech Hospice Care were chosen from a shortlist by almost 1,700 Luton Town fans, who took part in an online poll to decide which organisation would benefit from their support. The charity will now receive additional fundraising support from our official supporters' groups, as well other online communities and individuals. They will also benefit from a dedicated matchday, where volunteers will be on hand to raise funds and awareness at Kenilworth Road for our match against Cheltenham on Saturday February 24th 2018.

"It is truly exciting that supporters have voted in such numbers for Keech Hospice Care to be their charity for the 2017-18 season. Hatters fans are legendary in their support for good causes, and Keech Hospice Care will already be a favourite among most fans because of their outstanding work over 25 years in helping local people with life limiting illnesses.

"Many fans may be unaware that Keech have to raise 70% of their funds themselves in order to continue their work on behalf of local families from their base on the outskirts of Luton.

"Our supporter groups including Luton Town Supporters' Trust, Loyal Luton, the Luton Town Disabled Supporters' Association and Hatters Talk are in the course of planning a number of events over the year to support their selected charity.

"But we need as many supporters as possible to get involved. If you'd like to help, you can contact your supporter group, or email me directly - john.miller@lutontown.co.uk. This is our third Supporters' Charity of the Year and I know, with the support of the Club's loyal fans, we can make a huge difference and make this a record breaking partnership. Come on you Hatters!"

Lifelong Luton Town Football Club fan Rob Figgins was cared for by Keech Hospice Care after being diagnosed with cancer in April 2017. He also chose to spend his final days at the hospice, where he died last month.

Gill Fujino, Rob's wife, said her husband would have been delighted to know he had helped Keech Hospice Care to secure this new partnership with his favourite team.

"Rob loved Luton Town Football Club and Keech Hospice Care equally," said Gill.
"He knew he wanted to end his days at Keech Hospice Care, and if there was a way his beloved team could help the charity, he would have been delighted to have been a part of it. 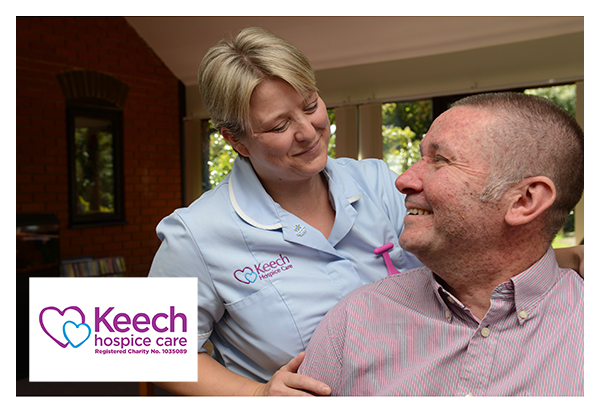 "Every week, Rob looked forward to spending the day at Keech's Palliative Care Centre, talking to others who knew what he was going through and having reflexology. He received excellent care and support from all Keech Hospice Care's fantastic nurses.

"If we had anything we were worried about we knew we could ring Keech Hospice Care anytime and there was a kind voice at the end of the phone who could provide the expert support we needed."