Hatters chief executive Gary Sweet got his hands on the club’s first – and what we all hope won’t be the last – piece of silverware this season when he picked up the Sky Bet League Two CEO of the Year award at the Football Business Awards last night.

The Football Business Awards recognise and reward the hard work that takes place in supporting the success of the game, and the event at London’s Tobacco Dock is the national gathering at which all the achievements off the pitch are celebrated at the end of each year.

Gary was honoured as the fourth tier’s winner along with Tottenham’s Daniel Levy from the Premier League, Preston North End’s John Kay from the Championship, Stephen Bettis of last season’s League One champions Sheffield United and Aberdeen’s Duncan Fraser from the Scottish Premiership. 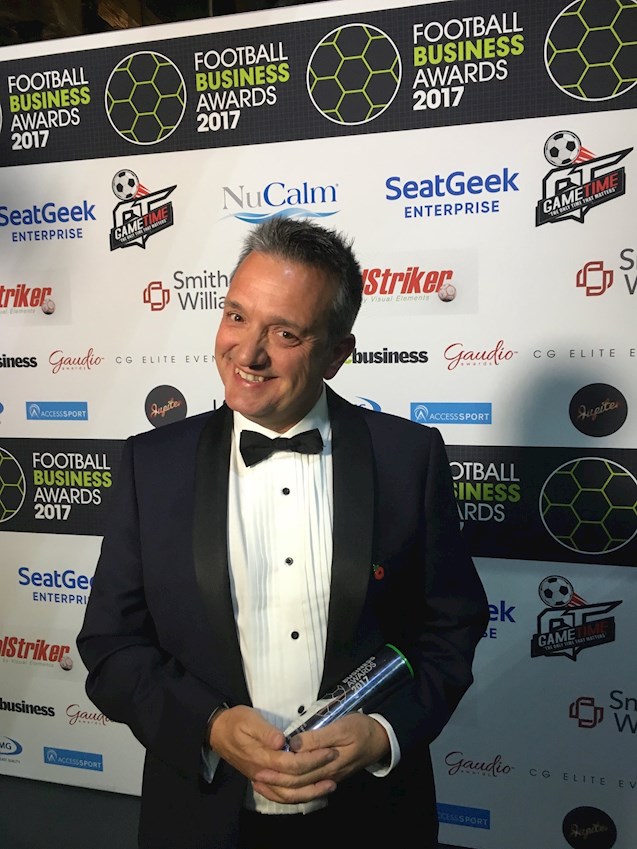 *You can listen to the audio interview by clicking here

The Hatters CEO told lutontown.co.uk: “It’s a reflection of the respect the football club has got right now. We’ve changed our image. There is a good culture at the football club. We’ve got a professional manner in the way we engage with other clubs and suppliers and everybody within the industry.

“I think there’s a certain character to it that’s not just professional, but friendly – and sometimes tough to deal with as well. We hope we are seen as that, but also fair. That’s one of the elements of our culture that, for what is coming up to nearly a generation now – and culture takes a long time to embed for the staff, for the people coming into the business to learn and to behave every day in that manner – we have been working on.

“Therefore last night’s award was about that. It was about how the players play, how the managers manage, the coaches coach, the staff operate, the boys and girls in the ticket office and the retail outlets; the way they behave and deal with customers.

“It’s a reflection of everybody, and above all, it’s definitely the way the board and the investors and shareholders have continuously backed the football club, me and the managers coming in. So it’s also theirs – and obviously the supporters.

“Everybody should be quite proud of this. Not proud of me. It’s not about me, but proud of the fact we’ve won something and been recognised for something.

“I had Andy Awford, Nathan Jones and Mick Harford around the table last night, amongst others, and I said ‘Look, let’s make sure this isn’t our last bit of silverware this season’. It’s nice to get in the winning habit. I know it’s a little thing, but it can mean a lot if we embrace the whole idea of the fact that this is a win. We’ve won one award this year, now let’s win more.”

Spurs chief Levy took the overall CEO of the Year award, but Gary’s selection as the League Two winner and nomination to go against such big names in British football underlines the wonderful work that is going on both on and off the pitch at Luton, as he spearheads the development plans for Newlands Park and a new stadium at Power Court that will help regenerate the town and area as a whole.

“I was nominated for the national award as well, and there was no chance I was ever going to compete with Daniel Levy – the job that he’s done is amazing and I’m sure the 3-0 win over Real Madrid on Tuesday night probably just swung it!” he added.

“Seriousbly, what he is doing there at Tottenham, they are ahead of us. Not just financially and in every other way, but in terms of progress with the stadium and everything. We are looking at Tottenham a lot at the moment, and the way they are marketing their new facility, the way they are building it.

“Obviously we can’t replicate what they’ve done – what we are looking at is something completely different. But they’ve been helpful and they’ve been friendly. So well done to Daniel on that. It was very, very well deserved, and that extends to all of the other winners.

“Last night’s awards were all about celebrating those people that have over-achieved off the pitch. There are so many awards ceremonies about players, managers and coaches, and there are a lot of unsung heroes about community awards for football clubs and the way they engage properly with their communities and charities.

“It’s good to see that some of the big clubs recognise that that is important. Take for example a club like Man City. Despite the fact that it is under foreign ownership and a lot of people would automatically assume that they are not fully engaged with the community, but my God they are. They are doing a lot of good work. Not just them.

“There is a lot of goodness and it’s great to see that those elements are being recognised more than ever, and I’d love to think that Luton Town, in our little way, and the way that we’ve tried to force some boundaries on that front, have maybe had a little bit of influence on larger clubs thinking that way. It’s not a competition, but a responsibility that football has got overall for some of those communities and those elements of our business.”

Swansea City are one such club who won the Best Club Marketing scheme award for Premier League clubs with their ‘Give a Jack a Jacket’ campaign, which saw winter coats, hats, scarves and gloves donated by fans to a Welsh homeless charity.

“We did that three years ago, and we don’t expect an award every time that happens, but I really hope that Swansea saw what we did and then just made it a bit better and did it in a Premier League way,” Sweet added.

“We won’t stop. We’ll carry on with all of those initiatives, but fair play to Swansea and fair play to everybody who won last night, and some of the suppliers too. It was a good night and everybody enjoyed themselves.

“Finally, a huge thank you to everybody who has given me a bit of a humbling acceptance of an award that I don’t think I particularly deserve, but the club – and the people around the club and the supporters – certainly do.”

All at Kenilworth Road would like to congratulate Gary on his, and the club’s, success - and let’s hope there are plenty more Town triumphs to follow in 2017-18!

*You can listen to the audio interview by clicking here