The snow and ice that fell over the weekend may look festive, and can be fun for the kids to play in. It can also be an inconvenience if you’re trying to use the transport network. But for people living homelessly in Luton, the winter weather is particularly dangerous.

That’s why we’re joining forces with Leeroy Jenkins, who has been running a winter collection and distribution of winter clothes ‘in the town’ for the last five years.

We’re calling on supporters to bring their unwanted hats, scarves, gloves and especially socks to the ticket office at Kenilworth Road, where there are collection boxes are in place.

Jenkins, who is also Vice Chair of Luton in Harmony, organises a team of volunteers who then take to the streets of Luton and the surrounding areas to hand out gift-wrapped packs containing the items directly to people living on the streets. Some packs are also distributed via Luton-based charity Noah.

All of these packs are handed out completely free of charge, with volunteers meeting the homeless and spending some time talking to them.

Leeroy would also be grateful for any donations of unwanted wrapping paper to wrap the packages.

If you would be interested in volunteering to help the wrapping team, then you can contact Leeroy by email: nextupprom@googlemail.com

The collection box will be at the ticket office until the 23rd December for our match against Grimsby Town.

Our thanks in advance for all donations. #COYH 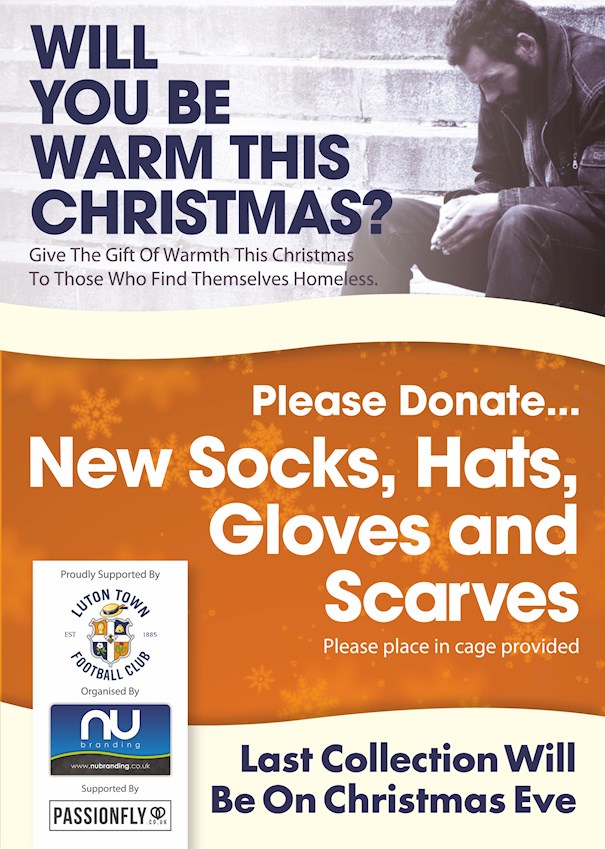