Town welcome the Bees to Kenilworth Road tomorrow as Nathan Jones' side go in search of their first win in six Sky Bet League Two outings.

With Accrington Stanley not in action this weekend, the Hatters – who have only lost twice in 11 matches – could move back to the top of the fourth tier with a win over the division's bottom side, whose new boss Martin Allen has called on his side to achieve 'Mission Impossible' as they try to push for safety.

The Bees visit the second most difficult place to play in the division, as the Hatters have picked up 41 points from a possible 57 at Kenilworth Road so far this campaign, rattling in 52 home league goals in the process.

If he plays tomorrow, defender Alan Sheehan – the manager's first signing after taking over in January 2016 – will bring up his century of appearances in a Luton shirt.

Tomorrow is the Hatters' designated Kick It Out Day at Kenilworth Road, where the club help promote the fantastic work they do in football. For more info on Kick It Out, please click here. 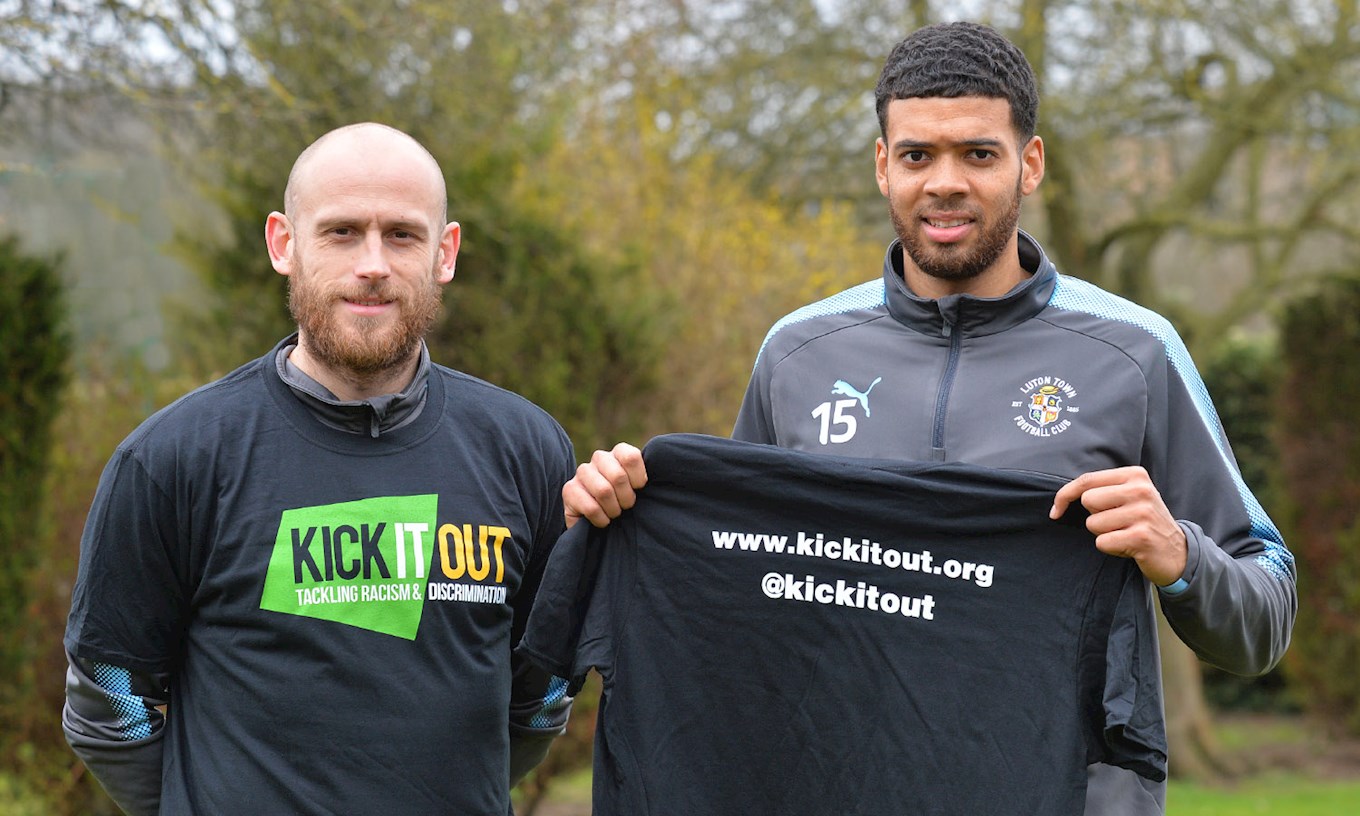 On the impact Martin Allen can have at Barnet in his fifth spell in charge: "Martin has an impact wherever he goes, in whatever way that he does. We can't second guess that, but we concentrate on Luton not Barnet.

"I watched our game against them when we played them two years ago, because that was the last time we crossed paths (with Allen in charge), and it was a good game – a very entertaining game with lots of chances. We hope we get a better result than we did that day (a 2-1 defeat to the Bees), but we can't second guess what Barnet are going to do. We'll just prepare our team to get the right result."

To read more on what Nathan Jones had to say on contracts and Town's international players click here.

The season began brightly for tomorrow's visitors, an opening day draw at Forest Green Rovers was followed by a 1-0 victory over the Hatters, going onto pick up ten points from their opening six games. However, their form dropped off, first costing Rossi Eames the job, before Mark McGhee over saw three wins and eight defeats in 11 games.

Now seven points off safety, Allen – who took over from Graham Westley – has got the opportunity to pull off a Newport-esque recovery, but time is certainly against the former QPR and West Ham United midfielder's side.

Kick-off is at 5:15pm on Saturday 24th March at Kenilworth Road.

Our last meeting ended in a 1-0 win for the Bees at The Hive last August, as Jack Taylor's late curling effort gave then boss Rossi Eames his first win as full-time Barnet boss. The north Londoners have already visited Kenilworth Road this season in the Checkatrade Trophy, when the group stage game finished in a 1-1 draw after 90 minutes, with the Town earning a bonus point with a 4-3 penalty shoot-out win.

Their last league visit was on New Year's Eve last season, when Alan Sheehan, Cameron McGeehan and Alex Gilliead were on target in a 3-1 win for the Town. Of the ten games between the two sides, Town have won six, drawn two and lost two.

You can follow the Hatters' Twitter feed on @LutonTown, or stay up to date on the LTFC website in the match centre. iFollow Hatters subscribers can tune in for Simon Pitts' audio match commentary, but international subscribers will NOT be able to watch the game live on this occasion as it is being broadcast live on Sky Sports. They will, however, be able to listen to the live audio. You can subscribe to iFollow Hatters by clicking here...

If you are a Barnet supporter heading to Kenilworth Road for this fixture, please check out our Away Supporters' Guide by clicking here, to make sure you get the most out of your trip to Luton!

The Hatters moved back to the top of Sky Bet League Two with a huge 2-0 win Barnet in front of the Sky cameras at Kenilworth Road this evening.

The division’s bottom club arrived having appointed Martin Allen as their manager for a fifth time in the week, but Nathan Jones’ side brought a five-match winless run to an end with a thoroughly professional performance.

Strikers Danny Hylton and James Collins continued their neck-and-neck battle to be leading scorer with a goal each, Hylton netting his 18th of the season to put the Hatters in front in the 47th minute and draw level with Collins, before the ex-Crawley man bagged his 19th of the campaign – and the Town’s second of the game – 20 minutes later.

The win took Jones’ men back above Accrington Stanley – who weren’t playing due to Yeovil’s international call-ups – on goal difference, and opened up an eight-point gap over fourth-placed Notts County, who are in action tomorrow at Chesterfield.

Jones made five changes to his starting line-up, the main one being in goal, where James Shea came in for his Town league debut in place of Marek Stech, whose wife Louise gave birth to their second child, son Mason, early yesterday morning.

The outfield changes came at right-back, where James Justin returned to the side, while Olly Lee, Andrew Shinnie and Alan McCormack – making his first start since mid-September at Wycombe – were brought into the midfield.

Olly Lee was next to have a go, bending one towards the top corner – but just off target – from fully 30 yards after orchestrating a patient passing move himself, before Bees striker John Akinde tried his luck from similar distance at the other end.

Shea started the next move, with an inch-perfect drilled pass out to Justin, that again ended with Olly Lee unleashing a 25-yard shot that Ross did well to push behind for another corner.

Then, in the 28th minute, Potts rose well again to get his head on another left-wing corner from Sheehan, but Ross was equal to it once more.

McCormack, who was everywhere, popped up on the right wing just after the half-hour and teed Justin up to deliver an inviting cross that both Hylton and Collins looked to get on the end of, before Luke Berry chipped one up for Hylton, whose glancing header was easy for Ross.

Berry brought the best out of Ross in the 37th minute, testing the visitors’ keeper with a curling shot from outside the box, before Olly Lee volleyed inches over the bar after Akinde could only head the resulting corner from Sheehan as far as the midfielder 25 yards from goal.

At the other end, the Hatters were reminded of the threat Akinde always carries when the former Bristol City striker capitalised on a loose pass from Potts in the centre circle to drive forward and hit a 20-yard shot just past the foot of Shea’s right-hand post.

It was goalless at the break, but the deadlock was broken within two minutes of the restart when Potts got on the end of another Sheehan free-kick and directed his header back across the face of goal for Hylton to nod over the line from a yard out.

The shackles were well and truly off, and Justin was soon raiding down the right and playing Shinnie inside, but the Scottish midfielder’s low shot was blocked, before the same combination almost brought a second, this time Ricardo Santos unwittingly getting in the way of Shinnie’s effort.

From the resulting corner, Berry whipped in a 20-yard shot that was tipped spectacularly over the bar by Ross, before Akinde, set up by Nicholls, called Shea into action from the edge of the box, but the Town keeper made a routine save.

Sheehan was keen to cap his 100th Town appearance with a goal, but he was off-balance when he let fly with a 65th minute shot that flew well wide after engineering the opportunity himself by linking a fine move together after a short free-kick on the right wing.

The Hatters didn’t have to wait long for the second though, as Berry picked out Collins lurking on the right edge of the area, and the striker didn’t need a second invitation to smash a 67th-miunute volley into the bottom corner, although Ross – who got a hand on it – might have done better.

Akinde, ploughing pretty much a lone furrow up front for the Bees, soon fired another effort high into the Oak Road End, before he had the ball in the net on 76 minutes – only for referee Michael Salisbury to rightly penalise, and yellow card the striker for a clear foul on Shea.

The Town were dominant at the other end, however, and both Olly Lee and McCormack, with 30-yard drives, had Ross flying across his line to tip over before Sheehan and Collins’ backheel short corner routine worked once more, but Cuthbert’s header was just wide.

Shea was called spectacularly into action in the 87th minute when sub Simeon Akinola’s free-kick from just outside the area took a deflection off the wall and looked destined for the top corner, but the former AFC Wimbledon keeper produced a brilliant tip over to preserve a first clean sheet in eight matches.

It capped a superb first league appearance for the Town for the 26-year-old - and the Town were back on top with a solid display.

Next up is a trip to Colchester on what we hope will prove a very Good Friday!