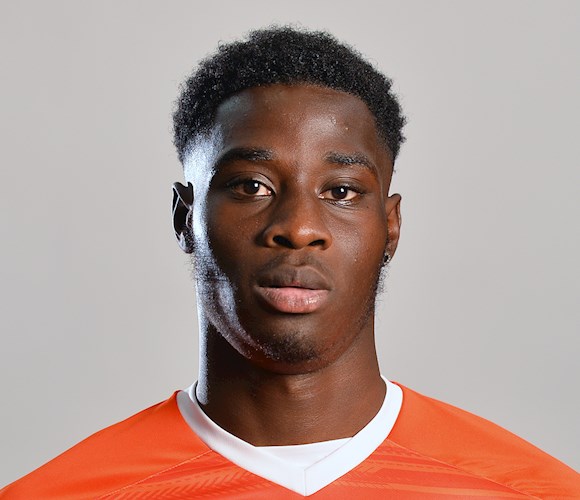 London-born striker who joined the Hatters from Sky Bet League Two club Walsall for an undisclosed fee on 1st February 2021.

The 23-year-old had netted ten times in the fourth tier so far that season, after scoring eight in his first campaign with the Saddlers following his release by Fulham in the summer of 2019.

The 6ft 4ins forward enjoyed loan spells in Non-League football with Slough Town and Bognor Regis Town as a teenager, before gaining EFL experience with Cheltenham, Swindon and Stevenage while coming through the ranks at Craven Cottage.

He left Walsall with an impressive record of 18 goals in 39 League Two starts, with the Hatters securing his signature despite interest from Championship clubs both in England and Scotland.

Adebayo scored on his first start for the Hatters against Millwall and was an instant hit with his team-mates and supporters alike. He followed up an impressive performance against the Lions with a goal and assist versus Sheffield Wednesday.

The striker scored three more times in the 2020/21 Championship campaign, as he made the transition from League Two to second division football look seamless.

His first full season in the second tier saw Adebayo emphasise that even further, with the striker finishing as the Hatters' leading scorer with 17 goals from 42 appearances in all competitions.