Luton Town striker Admiral Muskwe brought a smile to the face of supporter Peter Tullio by delivering a shirt signed by the whole Hatters squad to his doorstep as part of the EFL’s commitment to charity partner, Mind.

Admiral went along to the home of 55-year-old Peter, a lifelong fan and a former steward at Kenilworth Road, and surprised him on his doorstep as part of the ‘Do One Thing’ campaign to mark World Mental Health Day, which is on Sunday.

Peter, who watched his first game at the Kenny as a 12-year-old, was one of the second cohort on the Luton Town Community Trust’s Fit Hatters health programme last Autumn.

He joined the programme in a bid to lose weight and strengthen and improve his range of movement around his hip joint, to enable him to undergo a hip replacement operation.

The Community Trust’s James Hatch was on the visit, designed to reward someone deserving within the local community with an act of kindness, and he explained: “Peter started in September last year on a walking frame going round the pitch trying to get ready for his operation by strengthening his hip and getting a range of movement, which he has now.

“He’s had a tough time with the group running round and walking round, and him being on his walking frame, so that has been difficult mentally and physically for him.

“Now he is coming towards his rehab time we feel that support and keeping him in the programme is only going to benefit him, and this visit from Admiral and the signed shirt is a well-earned reward for him for all the hard work he has put in over the last 12 months or so.”

It hasn’t all been plain sailing for Peter, who explained: “It was tough, because I couldn’t do everything that all the other guys could due to my hip. I could only manage two or three laps of the pitch, and it was frustrating. Thankfully I stuck at it though and lost enough weight - about four stone - to be able to have my operation in June. It's done me the world of good. Now I'm back at the football club!”

The change in Peter’s lifestyle and wellbeing since then has been immense, due in no small part to being part of the Fit Hatters team that meets at Kenilworth Road every Wednesday evening.

“It’s a great group and there’s a real good atmosphere,” he said. “We’ve even got a Barnsley fan who lives in Luton, so that gives us plenty to laugh and joke about with him!

“Being around the guys there gives me a real lift and I’m now doing half a dozen laps of the pitch. This time last year, I couldn’t even walk the 50 yards to the end of my road without stopping three times.

“Last Saturday I walked from the train station up to the Kenny with no problems at all. It’s like I’ve been given a new lease of life, and receiving this shirt from Admiral today has given me a new incentive. I’m going to keep working hard so I can wear it. It'll fit soon!”

The visit was a learning experience for Admiral too, who listened intently to Peter’s recollections of his early years watching Brian Stein, Mal Donaghy, Ricky Hill and, of course, Mick Harford, in action at Kenilworth Road.

“You can see how much effort Peter has put in to getting fit for his operation, and then since,” said Admiral. “As a relatively new signing who has been injured recently too, it’s given me a real lift coming here to hear his story and learn more about the club’s history from him. His passion for Luton Town is something else.

“He’s obviously been through a tough time, but for Peter to be able to walk to the ground on a Saturday afternoon again with no pain is brilliant news. And I now know where he sits so hopefully when I get my first goal at the Kenilworth Road End, I’ll be looking for him to celebrate with!”

Speaking about the 'Do One Thing' campaign, EFL Chief Executive, Trevor Birch said: “Over the past four seasons, our partnership with Mind has been instrumental in creating a significant cultural change towards mental health within football. The partnership has provided players, staff and fans across the football community with an important platform which has contributed not only to a change in outdated attitudes but also has positively impacted people’s lives.

“World Mental Health Day presents us with another opportunity to continue the conversation and showcase that life-changing support on a national and local level. It is fantastic to see EFL Clubs and Club Community Organisations come together once again to demonstrate the excellent efforts they make to improve the mental health and wellbeing of their communities.”

Mind Chief Executive, Paul Farmer, said: “We’re delighted to come together again with the EFL, as part of our On Your Side charity partnership, to celebrate World Mental Health Day. We know how hard the pandemic has made life, particularly for football fans, and that too many people are still not getting the support they need, so there’s never been a more important time to fight for better mental health.

“Our message to fans is that if we all do one thing, we can change everything. Even small gestures can have a big impact, so whether it’s sending a message to a mate to check-in on them or signing up for an active challenge to fundraise for Mind’s work, we’re encouraging everyone to mark World Mental Health Day by doing #OneThing for mental health.”

To find out more information and for how to get involved with ‘Do One Thing’ on World Mental Health Day, please visit: mind.org.uk/EFL 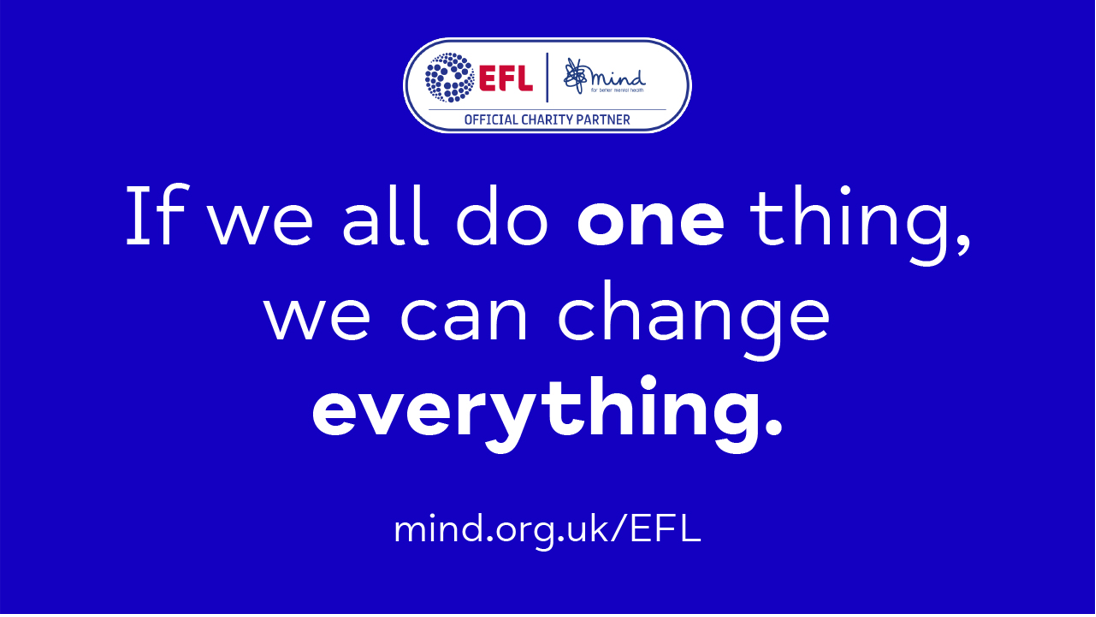