Kal Naismith is sitting in the September sunshine at The Brache, referring back to another warm Luton afternoon two days earlier on the other side of town.

The 29-year-old had been to visit the only Luton Town player to gain a full international cap for Scotland, Mike Cullen, in the garden of Trefoil House care home where, now aged 90, the former Hatters winger resides.

Along with club historian Roger Wash, Kal gave up an hour of his time to sit and chat with a man who, like himself, left his Glasgow homeland as a youngster – 17 years old in Mick’s case – to move south and set up home in England.

He may be a dozen years older than the man he reminisces with about growing up close to Partick Thistle’s Firhill stadium when he moved to Luton, but Kal sees similarities and can take inspiration in more ways than one from the man who scored 19 times in 126 appearances for the Town.

“I enjoyed sitting there spending time with Mike,” said Kal. “He was good company. He was still very, very sharp for 90 years old, and he was funny. I loved hearing his stories.”

They included tales of nights out with the likes of Shirley Bassey and Diana Dors, of walking through town with supporters stopping him to talk about the game, and recollection of his modest wages and transfer fees to Grimsby and Derby County, before returning to Luton and then being one of 35,000 staff at Vauxhall, earning more money than he did playing at Kenilworth Road.

Kal also searched the YouTube footage of Mike’s proudest night, setting up their country’s goal in a 1-1 draw with Austria in front of more than 90,000 at Hampden Park, and held his phone up to show his Mike the clip that he’d never previously seen. 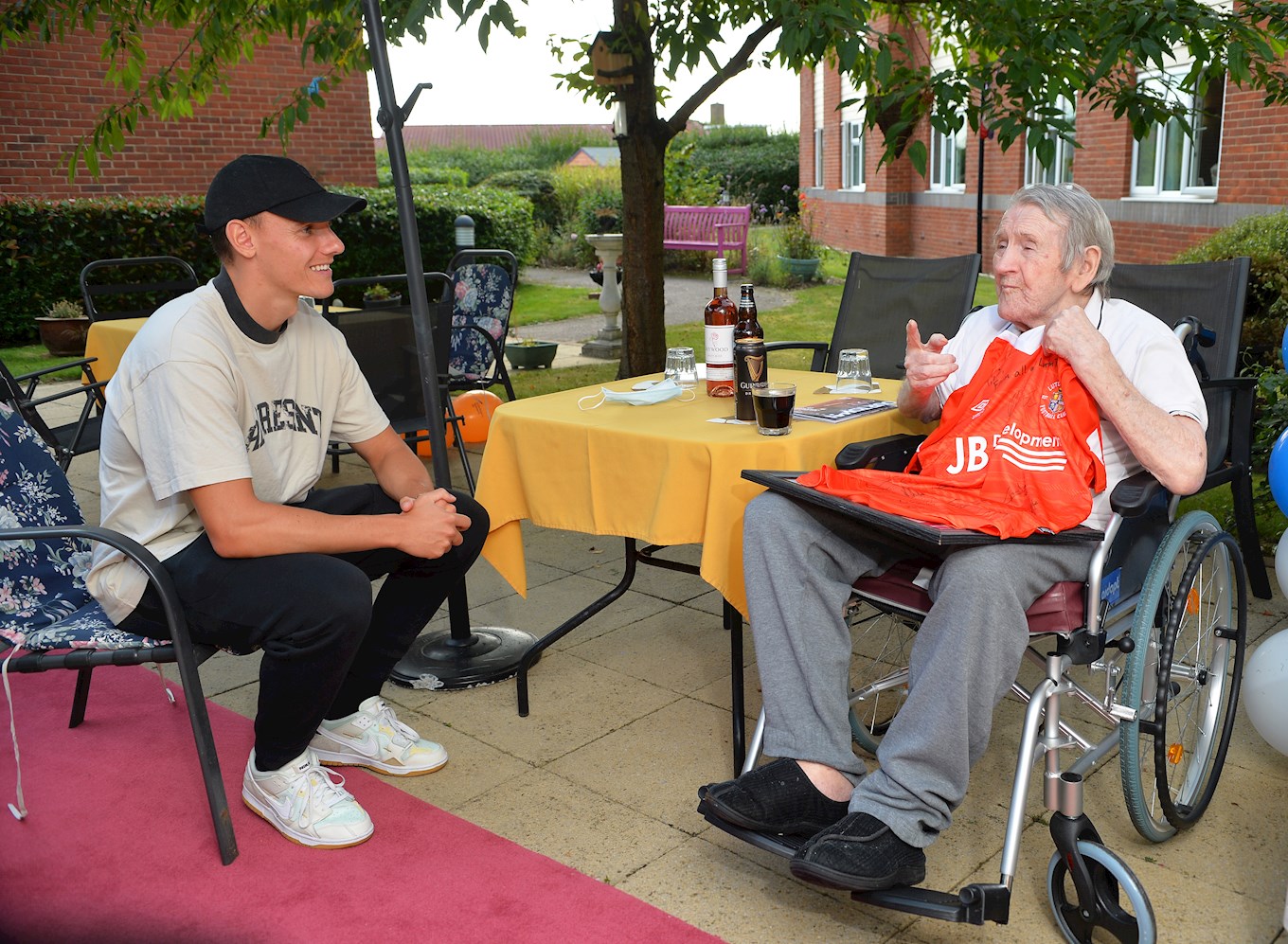 Did the visit, arranged to give Mike a lift after a difficult time for all residents and staff in care homes locally, especially since he overcame an especially tough bout of Covid at the height of the first wave, inspire him to become the club’s second Scottish international? Or maybe third, if Allan Campbell – Scotland’s third highest holder of Under-21 caps – beats him to it?

“Yeah,” says Kal, nodding. “That’s one of my ambitions. I’ve got goals in football that I’ve not quite achieved yet, and that is one of my biggest. Everyone wants to represent their country and I’m no different. I’d love to, and it does give you inspiration just going there and talking to Mike about it.

“So to see that he’s done it, he’s moved away from home and done everything that I’ve done, and it’s crazy to see him still down here at 90 years old. It makes me think, ‘Am I going to be here at that age?’ I spoke to Mick Harford about it before. He said, ‘Once you end up here, you’ll never leave’. And to see him down here for all these years.

“Obviously he played for Scotland, and if me and Al can do it – or one of us can do it, I’d be delighted if it was him, if it was me…as I say, it’s a massive goal so I’d be so happy.”

For Kal to be outlining such ambition, both internationally and in terms of considering a long-term future in this part of Britain, can only be positive for the Hatters. Town legend Big Mick famously moved here in the 1980s from Sunderland, via Lincoln, Newcastle, Bristol and Birmingham, and never left after his son William was born here, setting up home in Harpenden.

“I’ve been down here in England eight years now and I’ve never really had a home. I think the longest I’ve stayed in one house has been two years. I’ve been at Wigan for three and Portsmouth for three, but in a house maybe two years max.

“Me and Mick had a conversation about two months ago, and he was talking to me about moving into my place down here and I was telling him that my eldest boy now is just starting pre-school. He said, ‘That’s it, once they end up in school and you sign a new deal, you’ll be here – you’ll be here forever, that’s what happens. It’s a great place live.’ “Obviously Mick speaks very highly of the place and the club. Everyone knows that. He is Mr Luton and rightly so. I was speaking to him about maybe going back up to Glasgow when my career is done, but he said that in football – and he’s bang on – you can’t really plan nine years in the future. You can’t really plan a year. You’ve just got to take it every month by month. Or every six months anyway.”

“Moncs is my landlord, but I promise I won’t go easy on him when we play them!” he laughs. “When I came down last year, I was in the process of getting rid of my house to buy one, which we all know can take a good few months.

“I was in a club house with Kiernan Dewsbury-Hall, which was brilliant for me. I was travelling back with my family, which was two hours a time on the train to Preston, so I was back and forth but predominantly living in the house with Kiernan four or five nights a week, and I loved that.

“But with George moving on, I spoke to him because he’s got two kids himself, so the house was perfect. I’ve been in there now for two or three months, so we’re settled. It’s worked out perfectly.”

Being settled off the pitch is clearly having an impact on it. Ever-present in the league so far this season, the Hatters centre-half has been in superb form, winning the Diamond Player of the Month for September with 35 per cent of the vote.

Having his partner Lauren and sons Bran and Brooks to go back to after training and matches is important for Naismith.

“It’s huge,” he says. “It’s that routine and I need my kids there. Everyone knows it can be tough being a parent, but for me it’s after a game on a Saturday, that’s when I always struggled.

“Last year I never had that after my matchdays, and I missed it. After a Saturday, regardless of whether we’d won or lost, I’d go home feeling a bit empty because they weren’t there. I’d pick myself up for Monday and Tuesday, and I would go again from there.

“But just having them there is that grounding, and I can never really be sad for too long. You’re angry at the result on Saturday night, but you go home and process it, and Sunday you’re up with the kids, you’re at the park and they are just a good distraction. That’s just what life is.”

Despite only having joined the Hatters in January, Naismith has quickly become one of Nathan Jones’ trusted lieutenants in the Town dressing room. His impressive performances in a variety of roles have helped, in particular since he started playing as a left-sided centre-half for the final three months of last season. But his ability to talk constantly – remember his “I could watch you all day son” comment, clearly audible on iFollow, to KDH as he played another glorious pass in the derby win last season? – and his leadership has seen him wearing the armband for most of this season so far, with club captain Sonny Bradley injured.

“I just go about my work, work hard and then try and be myself, so to almost get that respect from the manager, that responsibility for the players – it’s a feeling that’s hard to describe and is the proudest thing that I’ve done in my career.

“Sonny is our captain and our leader, but we’ve got lots and lots of experienced lads and leaders in the changing room, so to be that one with the armband on in his absence, and to have that feeling of leading the lads out, it’s a massive honour.”

And on his position on the pitch, Naismith has scored here under the Kenny lights as an attacking opposition player for Portsmouth, but has proved his versatility in his 32 appearances so far as a Hatter. Does he see centre-half as his best position?

“That might be where I see myself, but again, everyone knows me and the manager knows me well enough that if he ever wants to move me about, then I’m here for the team, it’s his decision and I respect him. I’m never going to question it. I’ll go there and do the absolute best that I can.

“But where I am now, I feel really settled, I’m playing well and I feel that I can impact the team from that position a lot.”

His performances, looking comfortable on the ball and topping the Championship’s stats charts for the highest number of interceptions in the early stages of the campaign, have seen supporters nickname him Kaldini – with a nod towards the great Italian defender Paolo Maldini.

The moniker originated at Wigan, his previous club who he helped to promotion from League One to the Championship, before the Latics’ off-field issues resulted in a 12-point deduction and relegation back to the third tier in 2019-20.

“It think it came from the shock of no-one at Wigan having ever seen me play centre-half, and then when I went there, that was just the one that got through there and it stuck,” he says. “I think my missus saw it on Twitter one day, and she was laughing that everyone was writing it, and it’s just stuck and it ended up coming down here with me.”

We’ve already seen his love of old YouTube clips, having shown his fellow Scot and ex-Luton hero that 65-year-old footage. Does he watch Maldini in action for the Azzurri and AC Milan, to learn any tricks of his relatively new trade?

“I don’t look at him, but since I went to centre-half, I watch a lot of games and just watch the centre-halves now. Funnily enough, when I was a number 10 I just used to watch clips of Zidane and Ronaldinho on a Friday night and Saturday night. But now it’s people like Ramos and Van Dijk, who is probably the one I watch most.

“I actually went to the Chelsea-Tottenham game last week though, and I literally just watched Thiago Silva for 90 minutes. He was unbelievable, so I’ll watch a lot more of him now, too.”

Chelsea’s Brazil international defender notched his first goal of the season in that 3-0 win at the Tottenham Hotspur Stadium. Yet to score in-front of the Luton faithful, Kal hopes to change that in the not too distant future.

“Yes, it is. We need to chip in, the defenders. It’s huge in the Championship, if you can nick goals from set pieces. I got close with a couple recently, I’ve got a lot more first contacts on the deliveries, so I feel it’s coming, and I’d love it to be at home in front of the fans.

“I love playing at the stadium. I know every player says that about their own club, but I do love playing at Kenilworth Road. It’s so packed, so tight, so full. The fans are as loud as anything and they get right behind us. I’ve scored here as an opposition player and I’ve scored for us with no fans there. I can’t wait to hear the noise when I get one, but I’ll take anyone scoring as long as we win.”