The following notes from the boardroom were written by Hatters director Stephen Browne for the final matchday programme of the season against Rotherham United last night. You can purchase a hard copy of 'Our Town' by clicking the image at the bottom of the article...

Hello to everyone for our last home game of the season. It is wonderful to be able to say hello even though I am a long way away, and hopefully reinforces some of the comments I make below about our Luton Town family and just what it means to us all.

Tonight we welcome Paul Warne and his Rotherham United to Kenilworth Road for a very important end of season game….this is no dead rubber I can assure you.

It is great to see that after we both suffered huge penalties all those years ago we now play each other in the same league. I very much hope that I can say that again next season because Rotherham have had a really tough season and were left with a lot of games to play in a short space of time. Now the Millers have two games left to perform an escape similar to ours last season, so of course they will fight for every ball and every decision.

Unfortunately - as we have all said in these notes too many times before - the ingredients missing for such a crucial game as this are you, the supporters. This will be the last time we have to play in such strange circumstances, and I think you already know how excited we all are at the Club to be welcoming you back, and how much we are looking forward to being full to the rafters. It will not be long now before we can see and talk to each other in real life.

These are my first notes since our wonderful win over those down the road. It was not enough to dent their hopes of a Premier League return, but nevertheless we delayed their celebrations for a while as our lads simply ran rings around those in black. A fantastic performance that deserved more goals for us, and shows how far we have come. We could have, and should have, done better at their place earlier in the season, but this time we left no doubt!

These are also my first programme notes since the comedy-drama that was the ‘European Super League’. Series 1 seems to have been a bit of a flop so I don’t think a Series 2 is in the pipeline just yet.

I think supporters will be well aware of the views our Board had on the issue, and you can rest assured that as a Club we were very vocal where, and when, needed. It will be interesting to see what the fallout will be because, as it stands, it seems to me that these big clubs have indeed made inroads in securing more money for their wallets. Concessions made by UEFA for the Champions League seem to favour a few of the bigger clubs, as does the income from the extra game programming….that will no doubt lead to even more eroding of importance of the League and FA Cups to these clubs that feel they are ‘too big’ for us now.

It does show supporters though that those in the important top positions of our national game can yet again not be trusted. Too many are happy to be duplicitous and negotiate behind the backs of others, cut deals, favour their own. And the authorities are grasping at forever waning power that they like to think they have, but they don’t. If it wasn’t for supporters and the tsunami of criticism in a very short space of time, then what would have happened? More feathering of nests, scratching of backs, and focussing of wealth, I bet.

Do you think the perpetrators will be sanctioned? These pirates who tried to claim the treasure of whole nations for their own? These money machines who care not one jot about the history of the game and the very foundation upon which their riches are built? One doubts that points will be deducted or seats lost at tables… so maybe a fine, or even just a slap on the wrist if only for show? Or will this just be swept under the carpet because the authorities are scared of the repercussions these clubs could enact later down the line?

What a sorry state of affairs when we let politicians shout louder than those supposedly protecting our game. I think we can all see that some people cannot be trusted; money is the tail wagging the dog; it’s becoming a closed shop for a set of ‘mates’; and authorities are largely useless and only act in self-interest anyway.

Maybe it is time for an independent review into the management and future of our national sport…for sure, football has given precisely zero indication that it can get its own house in order, despite the world pandemic and the necessity that has brought.
Football has not come together, there is no ‘football family’, there is a disconnect. Let’s get real and instead of allowing those in power to hide behind this cuddly image that everything is OK in the football ‘family’, let’s have an independent review conducted by trusted people to show what’s what once and for all. If clubs in the top echelons of the European game are to be trusted again, then let’s get out in the open the good and the bad of the workings of football and fix the bits that are killing it.

For some reason, I think I may as well whistle in the wind….

So, back to the game. On our part, we want to finish as high as we can in this league and maybe even our best finish in the football pyramid since we were relegated from the old Division One (for the younger readers than I, that’s the Premier League as it is today) nearly three decades ago. Or, if we were to finish better than that rollercoaster of the 05/06 season where we finished tenth, then that would be yet another record that this generation of supporters can be so proud of.

Just think, after that tenth place in 2006 we then had three seasons where we finished 23rd, 24th, and 24th again. But we are back! Truly back! Competing at a level we could only dream of all those years ago, and on a par with some of the great names we remember wearing our orange, black, and white.

On behalf of us all I am sure you will agree, I thank every single player and member of coaching staff who have done so well in such difficult circumstances. I am deliberately mentioning no names because this is an example of amazing teamwork where everyone has played a role, a vital role. Combined they have provided us with a link back to The Kenny, back to those colours that mean so much to us, and given us all the emotions we could ask for, and a whole host of memories too.

Whatever happens and whether we gain our highest finish for nearly 30 years, or just miss out and have our best finish for 15 years, we also know we are not experiencing the calm before the storm….as we all know, our house is very much in order these days and our guiding principles remain immovable.

Only three times in our tenure have we finished outside the top ten of the league we have played in, and in all but this season that has been because we’ve always had 12 men on the pitch. So, enjoy yourselves as best you can – you deserve this. It may not be a cup, or a promotion, or a relegation escape, but we have arrived. For everyone this is vindication of your hard work, commitment, courage, and positivity. The hardest thing to do in football is finish high in your league – the season lasts so long and it is where luck evens out, so the sheer intensity weeds out any imposters. You deserve this.

To finish this high in this league – one of the hardest, if not the hardest, leagues in the World – is an achievement that is up there with anything else we have done in my opinion. It marks the end of a long journey where I am so proud to say that everyone associated with the Club has moved mountains.

We have all grown in that time. And with that growth has come the renaissance, the reinvention, the phoenix, both for us all individually and for our great Club. We are back. Bigger. Better. Stronger. Ambitious. Together. Happier. Where to next?!

No other Club knows what role all supporters play, how we are all the DNA of our Club, the lengths we will go to correct the wrongs, and the sheer force that ‘Luton Town Football Club’ is the umbrella for.

We’ve had franchise thrown at us, owners screw us, points taken away from us, decisions in finals that were plainly inept, PLC’s targeting us, the ‘money farce’ that is football to navigate, obstructive authorities, many looking down at us or just being bluntly disrespectful….we’ve had it all.

Rather than be down, give up, or bemoan our lot, we have used every challenge thrown at us as a way to grow and learn and get better. We have never shirked, we have never thrown in the towel – if we’ve been knocked down we’ve gotten up stronger, faster, more agile, more determined.

What a wonderful way to be! Just when you think things can’t get any better, all of us take another step forward. Many of us, especially those that follow from around the world, have never even met each other, never even exchanged a word. And yet here we all are, standing together as we have done for over a decade, arms around each other. What you have created is really very special, covers the globe, and is unequalled by any club our size nor matched by many that are ‘bigger’.

We are Luton Town.

So, on behalf of everyone on the Board and at the Club, have a great summer and reflect on and rejoice in a rare Hatters season of little/no controversy but where together we have yet again achieved so much. Bring it on! 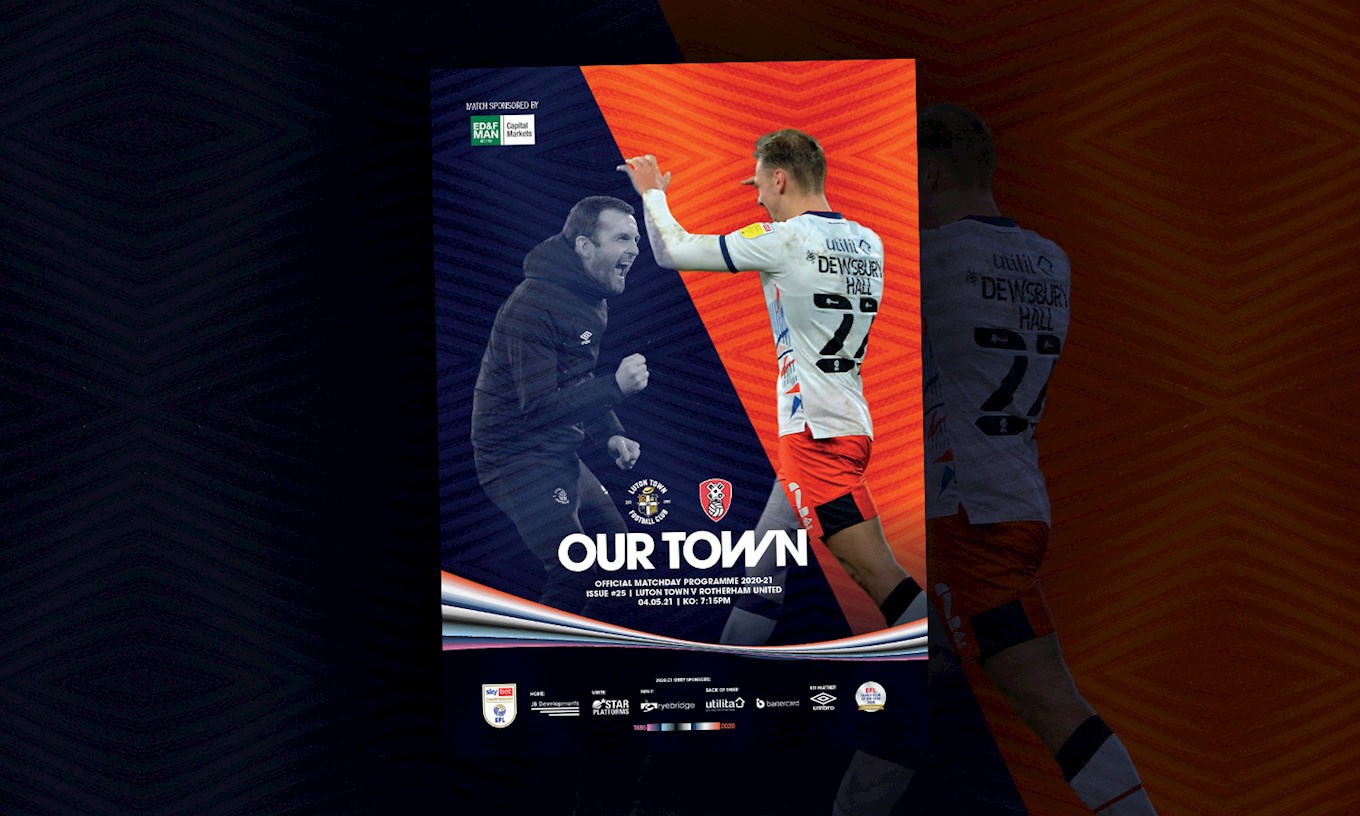