Kal Naismith on his Man of the Match performance in 1-0 win at Nottingham Forest!

Kal Naismith is intrigued to see how far the Hatters can push themselves for the rest of the Championship campaign after claiming a fantastic one-nil away win against Nottingham Forest.

The result means Town are unbeaten in their last three matches and claimed back-to-back wins to move up into 13th position in the table, with a gutsy performance against the Reds.

It was by no means a routine victory for the Hatters, who were put under pressure by the hosts but Naismith gave credit to the entire squad for rising to the challenge.

“It has been a great few days, unbeaten in three now which at Championship level is very, very difficult to do. It is a tough league, fixtures come thick and fast every few days, it just shows the strength in the squad.

“Three different lads started tonight and put in a great performance again. It is testament to the squad, everyone played their part and to go three unbeaten just gives us confidence ahead of the next one now.”

The 28-year-old, like he did during the second half of the win against Sheffield Wednesday, played at centre-back alongside Matty Pearson, a role which appears to be suiting him well.

“It is a position I enjoy, a position I have played before. I enjoy it there but as I said when I came in, it is up to the manager, that is the manager’s decision where he wants to play me and whenever he does need me.

“Wherever he sees me fits to play for the team I’ll play, today it was centre-back. I enjoy it, really enjoyed the challenge playing against a top striker in Glenn Murray and Lyle Taylor came on at the end too when they went two up-top.”

As well as the back four, Simon Sluga’s contribution to the team didn’t go unnoticed by Naismith, who highlighted the ‘keeper for special praise.

“I thought he was outstanding today. Made a few great saves, really commanding in his box which helps us centre-halves. I think he was unbelievable today.”

Speaking more generally about his move to Kenilworth Road since January, the former Wigan Athletic man feels he is settling in well at the club.

“I think the first two or three days, I knew it would be a good fit. Speaking to the manager, Chris, Mick, Harty, I just knew I would like it. The lads have been brilliant, it is just a great place to go to work, really enjoying working and we are a good side, we can give anyone a game as you have seen and I’m delighted to be here and happy with how it has started.”

And ahead of Saturday’s tough fixture against league leaders Norwich City, Naismith is sure his teammates will remain positive and look to continue their good run of form.

“We are a good side, great strength and depth. Let’s look up, let’s keep poised. It is a difficult league, we will have weeks where it gets tough but if we remain positive and keep picking up as many points as we can to see how far we can go.” 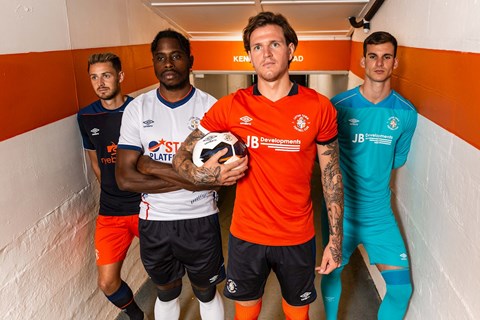