As Euro 2020 belatedly kicks-off for England, Wales and Croatia this weekend, orange-tinted Luton Town sunglasses will of course be focused on Baku and north London.

The main points of interest are well known, with Joe Morrell and Tom Lockyer hoping to add to the club’s growing collection of Welsh caps as Rob Page’s squad open up with a Group A match against Switzerland in Azerbaijan later on today.

We wish both Hatters every success, as well as our goalkeeper Simon Sluga who will be in the Croatia squad at Wembley for the Group D opener against England on Sunday afternoon.

You can find out when and where the lads will be in action HERE.

Regular listeners to talkSPORT will know of further Luton Town involvement in the tournament however, with one of our own, the brilliant broadcaster Faye Carruthers, handed the job as the station’s behind-the-scenes reporter in the England camp.

Faye, a proud Lutonian who has been a Hatter since watching her first game in 1994, has been part of the Press corps up at Middlesbrough and St George’s Park for the past fortnight.

It’s been refreshing to hear her views on whether Gareth Southgate should go with three or four at the back, Jude Bellingham’s potential involvement in the midfield or whether Raheem Sterling and Marcus Rashford should support Harry Kane up front, rather than young pretenders Phil Foden and Jack Grealish.

Now, we all know she’d rather be discussing Fred Onyedinma and Reece Burke’s arrivals at Kenilworth Road this summer...and true to her roots, Faye was happy to take a call from us on Thursday afternoon, just ahead of her trip to the oche to take on Bukayo Saka in the now-regular England Team v Media daily darts match!

Faye hosts club dinners for us, helps with charity events and is regularly on duty working for Sky or the BBC. She was just as excited about the chance to be back inside the Kenny next season watching the lads kick on in the Championship as she is to be under the Arch popping in her role this summer.

Like our players, we would like to wish Faye a successful tournament and to keep doing all Hatters proud on the airwaves – as well as fellow fan and Anthony ‘Spiney’ Hagen (pictured with Faye below at St George's Park), who is also on duty in his role as a camera operator for Sky Sports.

If anyone else with the Hatters in their hearts is helping the tournament run smoothly, maybe if you’re on the catering team, a steward or a paramedic helping keep the fans safe at Wembley – or any other venue in Europe – over the next month, tag us in a picture on social media, preferably with the club badge on show, and we’ll amplify it.

And if you’re lucky enough to have a ticket to watch your first live action in six months or longer, of course tag us in your pics too.

Good luck to every Hatter involved at whatever level - enjoy yourselves and stay safe! 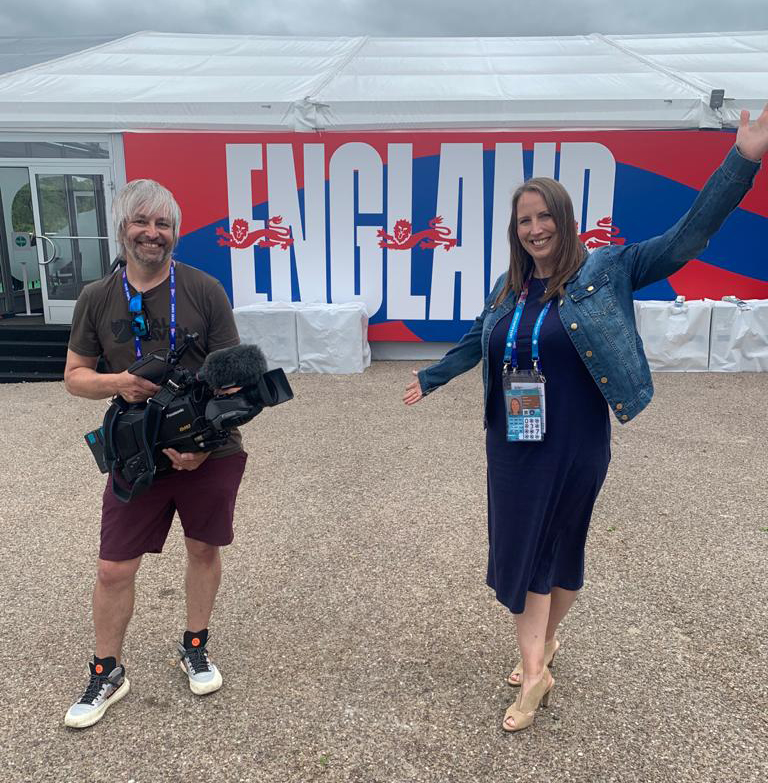