POST-MATCH | Elijah Adebayo reacts to his goal and the 3-0 win at Blackpool!

Top scorer Elijah Adebayo felt netting the first goal just before half-time was crucial in the Hatters’ superb 3-0 win away at Blackpool yesterday.

In conditions at Bloomfield Road that manager Nathan Jones described as “apocalyptic”, the Hatters got the 42nd-minute breakthrough with a Sonny Bradley header, with Adebayo nodding in his ninth goal of the campaign soon into the second half.

Man-of-the-match Jordan Clark added a third in injury-time, with the victory ending a run of four games without success to lift the Town back up to 12th in the Sky Bet Championship table.

Adebayo said: “Goals win games. Forget the 3-0 scoreline. Any win today would have been perfect to stop the rot, if you say. We’ve had a few disappointing weeks of late, but we know we are a good team, it’s just about putting those things together and being clinical in both boxes, which we haven’t been over the past couple of games.

“Today, with the conditions, we’ve had to ride our luck at some stages of the game, but if you defend properly and do the basics right, like the gaffer says, you’ve got every chance of winning a game.

“The first goal is always important. If we score the first goal, then it’s very rare that we lose games, so we know how important those two factors are – and yes, it’s been a good day.”

Were the gale-like winds and incessant icy rain difficult to play in?

“It affected me, I don’t know if it affected everyone else! Listen, you can’t control the weather. It is what it is, you just have to play what’s in front of you,” the 23-year-old said.

“I felt like the boys dealt with it fantastically well today. Sheasy coming in did fantastic, with some key saves, some good saves, coming and collecting things.

“So outstanding from him and the back five, and yes, I’m incredibly proud of the boys today given the conditions and we took our chances when they came, so all good.”

Having seen his penalty saved in the goalless draw at Nottingham Forest last week, Adebayo was happy to be back on the scoresheet to restore his two-goal cushion over Harry Cornick at the top of the Town scoring charts. 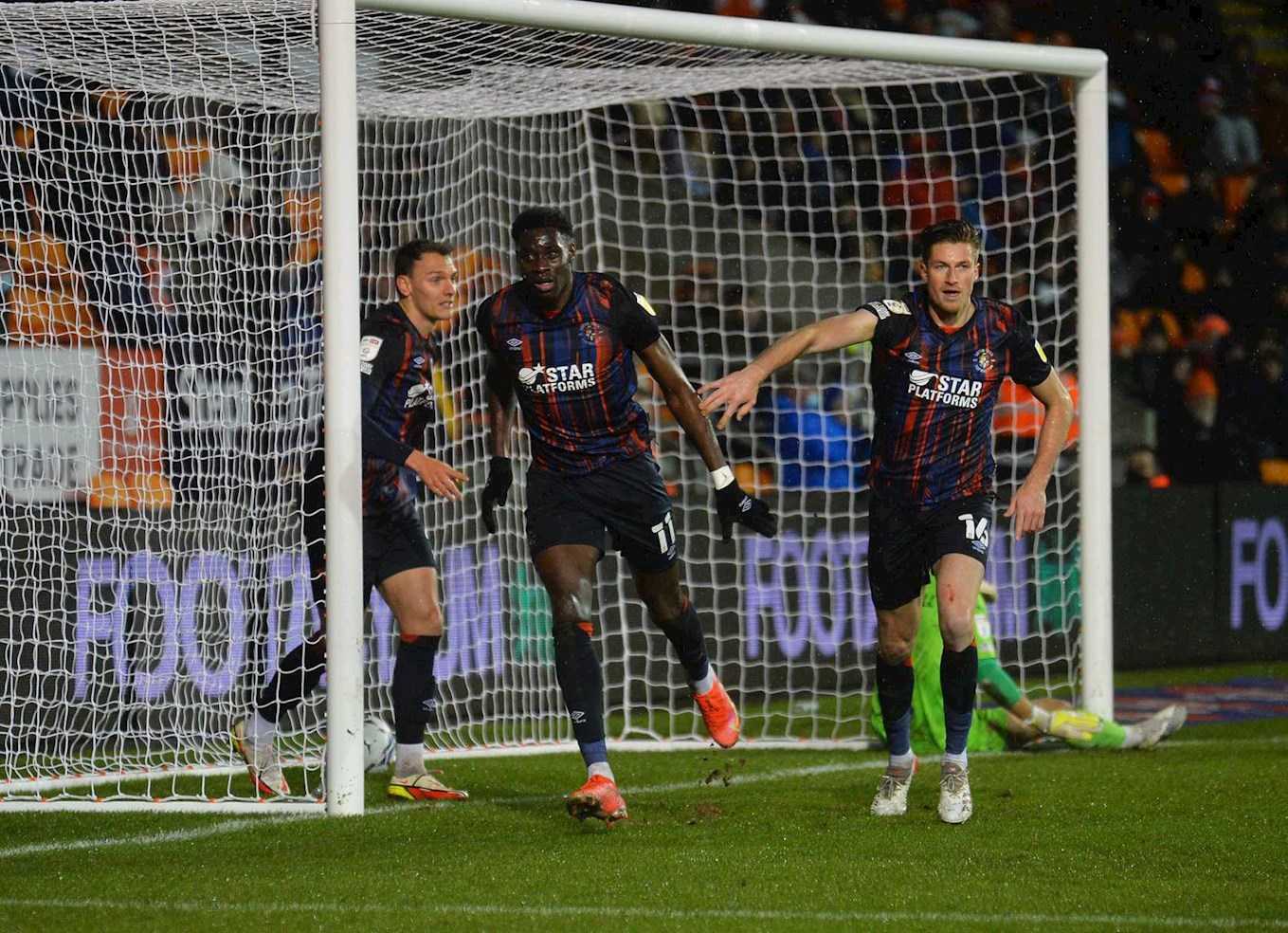 “I should be on ten – I should be on more than ten actually, but definitely ten. Obviously things have happened, but I’ve forgotten about those now. We move on and I just need one chance, and that came today, and I took it.

“I’m glad to be back in the goals and moving in the right direction, and hopefully they won’t be the last of the goals.”

Finally, the striker paid tribute to star man Clark, who provided the assist for his goal and then netted the third himself.

“Clicker was fantastic all day, picking up positions inside the pocket, finding passes and driving us forward.

“We were a threat in the first half without actually getting the goal. It might have seemed like it was an even game, but when we got into their half we looked dangerous and that’s what Clicker is like.

“The best free transfer in history, as what the Gaffer says, and he proves that week in, week out, day in, day out in training.”