Luton Town Football Club will join with the whole of English football in a social media boycott this weekend, as part of the ongoing fight against racism and all forms of discriminatory abuse online.

From 3pm on Friday 30th April until 11.59pm on Monday 3rd May, the FA, Premier League, EFL, FA Women’s Super League, FA Women’s Championship, PFA, LMA, PGMOL, Kick It Out and FSA and all member clubs will switch off their Facebook, Twitter and Instagram accounts, although we and most are extending that to all social media channels.

As a Club, we are encouraging all players, staff, partners, stakeholders and even supporters to do the same for ALL social media as the English game collectively sends a message to the social media companies that they must do more to eradicate online hate and discriminatory abuse.

This doesn’t mean that we can’t look at those channels during this period, but we ask kindly that everyone associated with Luton Town refrains from posting publicly on them during this time.

That includes everyone from manager Nathan Jones to stewards who play a crucial role on a matchday, from club captain Sonny Bradley to our academy players who are old enough to have a social media account.

We want everyone to keep in contact with people, of course. We need to do so now, more than ever with what we have been through in the past year. But why not go old school and send a text, an email or even, in this difficult time for so many, dial the number of that old friend you usually only reply to online, and have a conversation to find out how they are?

"Surely the first thing we've got to do is stop those messages getting through."@LutonTown Chief Executive Gary Sweet has had his say on English football's social media boycott #EFL | #NTOAD pic.twitter.com/5zXfrfciao

This campaign is so much more powerful when everyone joins in, but it can also be weakened by those who don’t.

We appreciate every single Hatter's support in a campaign against an online scourge that has sadly touched our own club in the past year. Only by being united will these huge companies get the message that football has had enough of the abuse and their lack of accountability.

For all Hatters news and info, please continue to visit this website during the boycott.

Live text updates of the match against Middlesbrough will be posted from an hour before kick-off on the Match Centre starting with team news at 2pm!

What change do we want to see?

How can you help?

If you have experienced or witnessed discrimination on social media, you can report it to Kick It Out through their online reporting form or via their reporting app available on both iOS and Android. You should also make your local police force aware by filing a report here.

By reporting online abuse, you can help stop the behaviour and protect other people from seeing the abusive content. Online abuse does not have to be experienced directly by someone in order for that person to report. Everyone has a responsibility to report online hate they see. 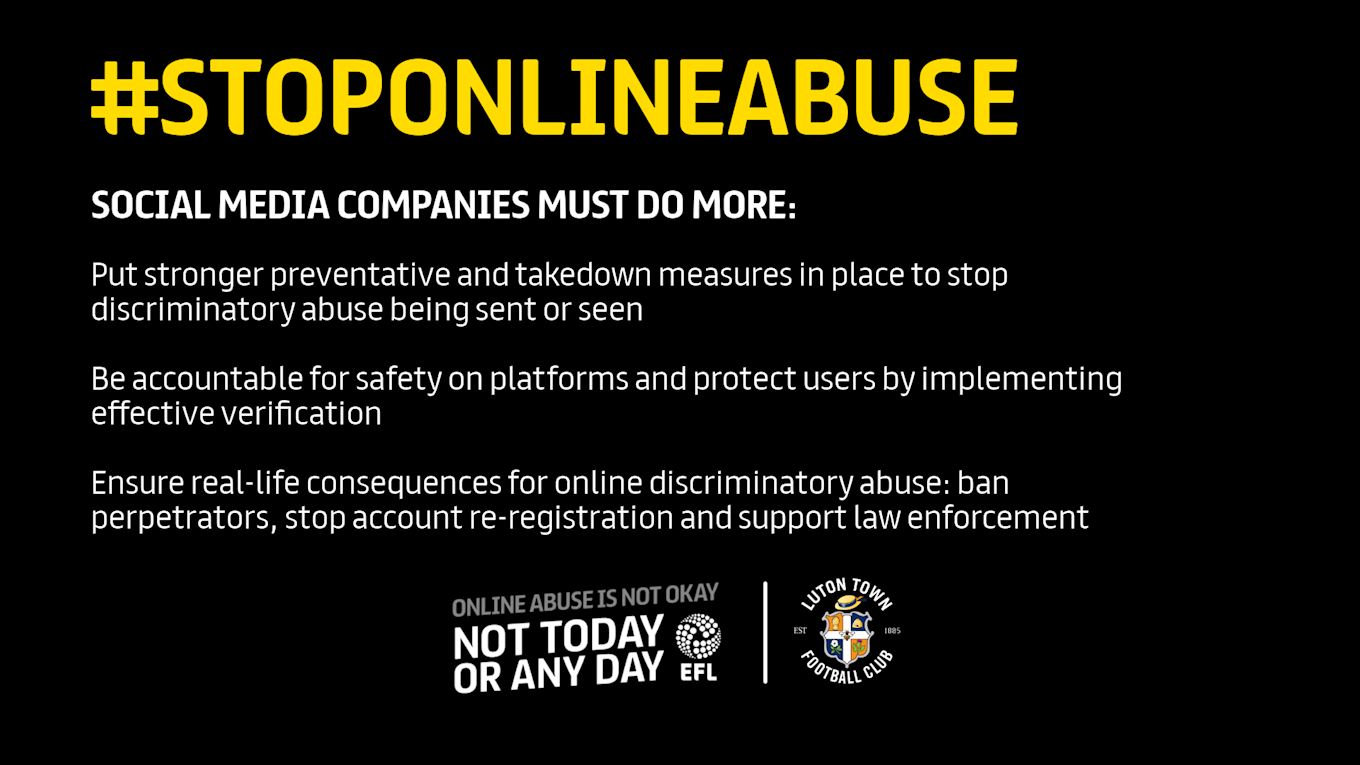