The Hatters will look to build on their unbeaten start to the season as they travel to the Madejski Stadium to face Reading in the Carabao Cup this evening.

Both sides have won their first two competitive matches of the season and the winner of tonight's second round tie is set for a home match against Manchester United in the next round.

You can follow the game live on iFollow Hatters by purchasing a £10 match pass, which you can do so by clicking the image at the foot of the page.

On Veljko Paunovic: “He has had a good start, I think there was work done prior, John O’Shea has got good people there and they added another coach as well from Manchester United so they have good pedigree. Reading are quite innovative with a lot of their managers, they don’t go for the obvious choice and they have had good success with that, especially Jaap Stam. They have got a pedigree of going a little bit further afield and I’m sure this manager is an excellent manager, as I said, great start to his Reading career so tomorrow something will have to give.

Previous tests against Reading: “Ironically it was my first taste of managerial action. I was caretaker manager at Brighton, against Steve Clarke and we ended up drawing 2-2, two-nil down after 11 minutes so it wasn’t the best start. We rallied, equalised late on and probably should have won the game.

"Good battles against them, we got promoted ahead of them when I was at Brighton, Steve Coppell left to go to them so they’re a good side. Recently a Premier League side, wonderful players, so it’s going to be a real tough game but these are the teams you want to test yourself against, magnificent prize awaiting for the winner so a bit of added spice.”

Holder of the Football League’s highest points tally when they won the Championship in the 2005/06 season with 106 points, Reading had two spells in the Premier League, one for two seasons and another for a single campaign.

In 2016/17, the Royals finished third in the Championship but lost in the play-off final to Huddersfield Town on penalties. They finished 20th in two seasons that followed and managed a 14th place finish last season.

After a playing career in his homeland as well as in Spain, Germany, Russia and the USA, Paunovic also previously coached the Serbia Under-18s, Under-19s and Under-20s before moving into club management.

The Serb was out of management after he left Chicago Fire in November 2019 following a four-year spell in the States, but he replaced Mark Bowen in August and has got off to a perfect start.

After joining Reading on loan in January 2019 initially, Ejaria made his stay at the Madejski Stadium a permanent one this summer from Premier League champions Liverpool.

He scored three goals and provided five assists for the Royals last season and started the season well with a goal against Derby on the opening day.

Kick-off is 6pm at Madejski Stadium on Tuesday 15th September.

The referee for this evening’s fixture is Charles Breakspear – who dished out 140 yellows and 12 red cards in 32 matches last season.

The Hatters had an afternoon to forget in the last meeting between the two sides, having lost 5-0 to Reading back in July.

The Royals are also slightly ahead in the all-time head-to-head with 25 wins, whereas Town have 20 wins and the two teams have shared eight draws.

Match passes to watch the 6pm kick-off live on iFollow Hatters are now available to purchase by clicking on the image at the foot of the page.

Unfortunately, the stream is NOT available to season ticket holders for free, so please be aware that no codes will be issued for this match.

It is also NOT available overseas. 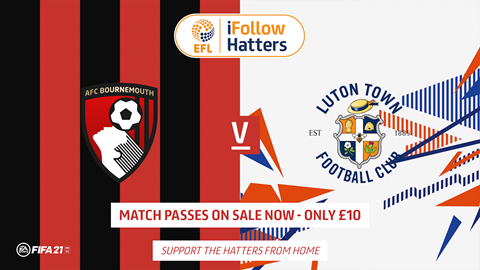