Manager Nathan Jones has provided a squad update ahead of the Hatters’ 2020/21 Championship opener against Barnsley on Saturday afternoon.

After defeating Norwich City in the first round of the Carabao Cup last weekend, the gaffer is confident his team are as ‘prepared as we can be’ ahead of the league season beginning.

Dan Potts was unavailable for the game against the Canaries and is so too this weekend, but Jones is hopeful the left-back will return shortly.

“He's in a better place, he won’t be ready for this game, but he’s not too far off which will give us competition as that's probably the only area with Brendan being injured as well that we’ve not really got as much cover as we would like, we want competition in that area, and if we get that then brilliant."

In his place was debutant Rhys Norrington-Davies who recently joined on-loan from Sheffield United and Jones was full of praise for how quickly the 21-year-old was able to adapt to the squad.

“That’s difficult sometimes to do, but he’s come in and settled in, he’s someone I like, someone I’ve watched and I’m looking forward to seeing how he develops as I’m pleased we’ve got him in.

“It was a real good acquisition for us, to give us real strength in that area and with Dan Potts coming back, we’ve got real competition, but it’s always tough to come into a squad and hit the ground running, so hopefully he’ll be better for the game last week, he’s had another week’s training with everyone, so he’s in a better place.”

Fellow new signing Tom Lockyer is available for selection after returning from international duty, as is Simon Sluga who was an unused substitute in Croatia’s Nations League matches against Portugal and France.

“Without being disrespectful I think Tom’s probably had harder training sessions than the games, Wales were very good, didn't get really tested against Finland or Bulgaria, so he’s come back in and been able to train all week as the intensity of the games in international football can be a little bit like that, but especially because they were comfortable, I think he's fine and he’s had a good weeks training.

“Simon joined us later because Tom had been in from Monday, Simon's come in today, so it’s a little bit more difficult for him, they've gone away and have had tougher games, but he hasn’t played any minutes, so we’re pleased they’ve both come back in injury free, we hope they've both enjoyed their experience, but now it’s getting back to the next month of the day to day bread and butter business.

Continuing, the manager added: "We're proud of having international players, it shows that we've come a long way, three years ago we didn't necessarily have any internationals, but now we’ve got potentially four, maybe even be more god willing if we strengthen the squad and that shows the level we’re at.”

Further to the four additions, Nathan was asked about the possibility of any more new faces arriving at Kenilworth Road before the window closes in October.

“We’d probably like to add one more in terms of getting something a little bit different, but we’ll have to see if that is possible and if it is possible then we’ll do it, if not then then I’m very happy with what I have.

You can purchase your £10 match pass for Saturday's game against Barnsley by clicking the image below... 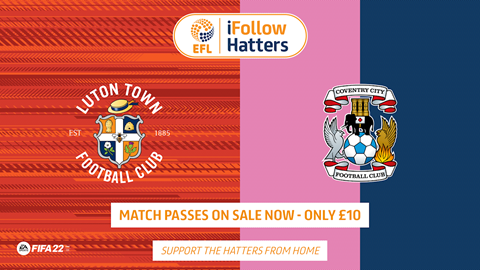