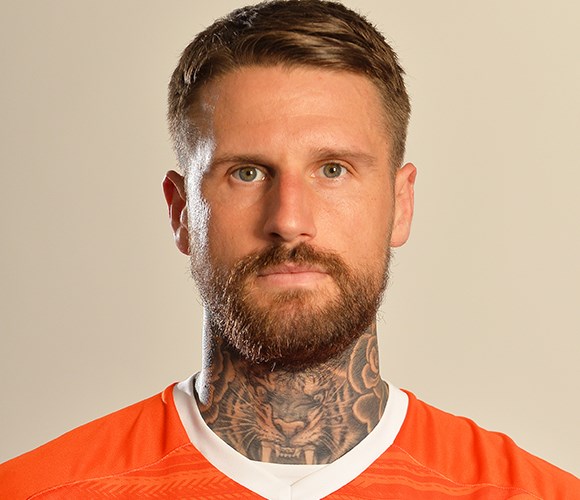 Centre-half Sonny Bradley joined the Hatters in the summer of 2018 after rejecting a new contract at Plymouth Argyle, penning a three-year deal.

The 29-year-old started his career with hometown club Hull City but gained initial first team experience on loan at Harrogate Town and Aldershot, where he spent a season-and-a-half in League Two.

At the end of the 2012-13 campaign he signed for Portsmouth on a permanent deal, then a year later switched to Crawley Town. The left-footer brings with him valuable experience of having played in the third tier for both the Red Devils and Plymouth, with whom he won promotion as League Two runners-up in 2016-17.

Won the Pilgrims’ player of the year award and was selected in the EFL League Two team of the season during that promotion winning campaign, totalling 96 appearances and scoring 11 times during two years at Home Park.

Captained the Hatters on multiple occasions as the club won promotion from League One.

Marked his Championship debut for the Hatters with his first goal, an outstanding strike from 20 yards. He scored twice more in the 2019/20 season, away against Millwall and an important header against Huddersfield after lockdown.

Bradley continued to lead the Hatters the following season and led by example during a tough time off the pitch, following the passing of his father, Ray. The centre-back played 41 times in all competitions and signed a new contract with the club in May. Watch | Sonny Bradley on his goal and Huddersfield draw


Captain Sonny Bradley believes the 1-1 draw with Huddersfield at Kenilworth Road was a fair result – but insists the Hatters will head to the John Smith’s Stadium for Monday’s second leg with... 
Sonny Bradley hailed Luton Town’s “good week” after they added another point to the three picked up in midweek with yesterday’s goalless draw at home to Huddersfield.