After a recruitment process played out on social media last month, we recruited Town supporter George Osborn to take charge of his beloved Hatters in the EFL Football Manager Cup in partnership with Mind, the league's partner charity. We thank George for his efforts and commitment in throwing himself into the spirit of the competition - and for writing this blog to tell us of his experience...

I think it’s fair to say a lot of us have dreamt of what it’d be like to be the football manager of the club you support.

You’ve watched your team play and thought ‘who would I have in the starting XI?’ You’ve taken the name and number of a dangerous opposing player, thinking about the instructions you’d give to try to take them out of the game. And you’ve probably, like all managers, experienced the powerlessness of seeing a match in full flow and realised you’re not in control of the situation anywhere near as much as you’d like.

It’s something I’ve experienced following Luton Town. And as a 30-year-old man with literally no experience in the world of football outside of a brief stint scriptwriting on a BT Sport show, I never thought I’d get to experience anything close to the pressure of the dugout in my life.

But the coronavirus crisis threw us all a curveball that ended up with me briefly in charge of the virtual equivalent of Luton Town.

Sports Interactive, the makers of Football Manager, and the EFL teamed up to organise a knockout tournament during lockdown to raise money for the excellent mental health charity, Mind. Football League sides would appoint a manager, they’d go up against their rivals in game and the winner would progress to the next round.

While some sides appointed players or Youtubers to be managers, Luton Town asked fans to send in a 100-word job application. Dredging up the thousands of hours I’ve spent playing football management games, as well as the many podcasts and articles I’ve written about the game, I popped a message over to the club offering my services.

And then, before I knew it, I was announced as the virtual manager of Luton Town and the hopes of the Hatters were – suddenly – weighing quite heavily on my head. 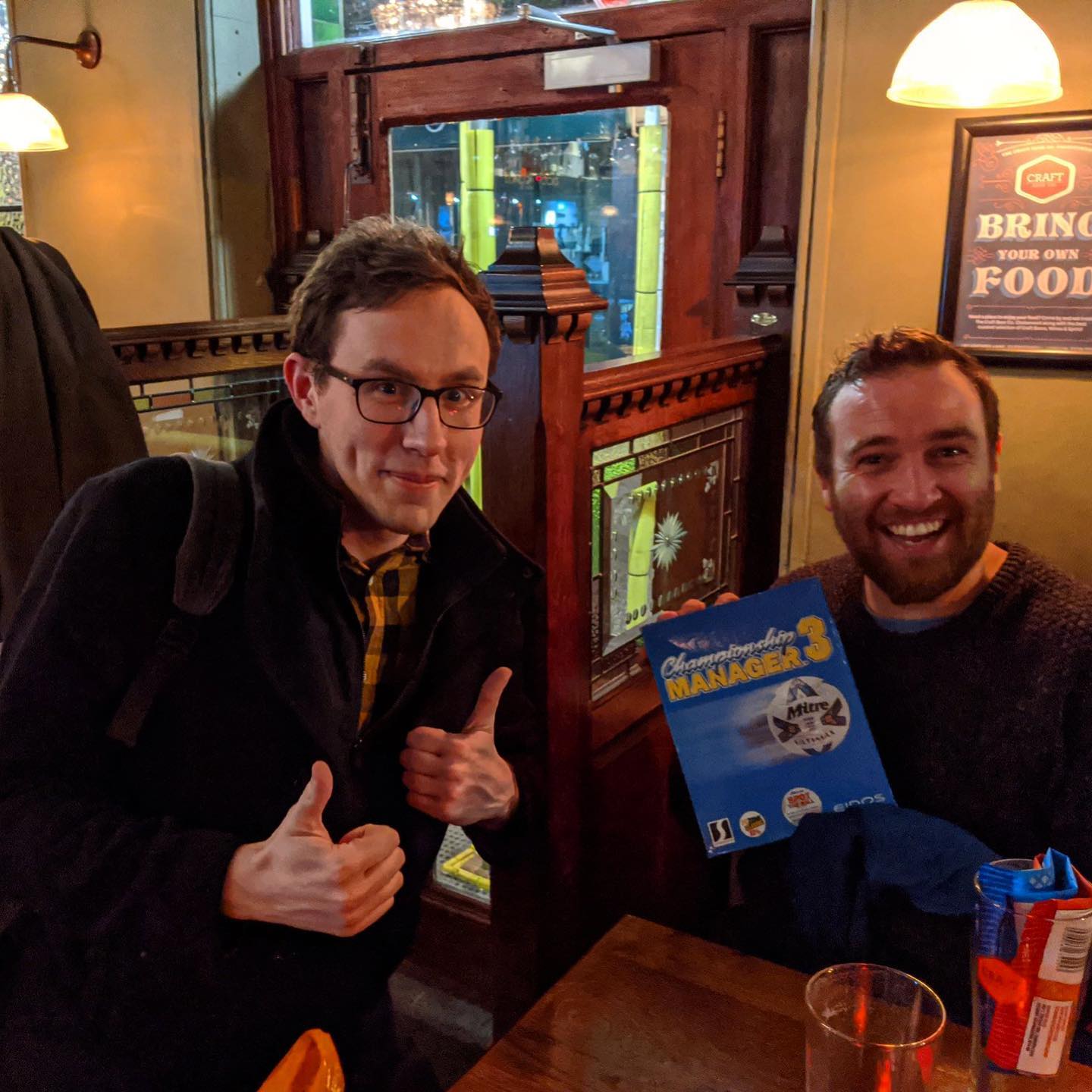 Upon finding out the news, I immediately had to begin getting to grips with my squad and preparing us for our fixtures.

For those of you who haven’t played Football Manager, and it’s almost insanely detailed simulation of the beautiful game, it’s hard to appreciate just how close it feels to the real thing at times.

Every Luton player is in the game in merciless detail. Everything about them from their physical make-up, their age and their injury history is in the game. And every single player has a breakdown of dozens of attributes rated from one to 20 to help the game model how they play.

This means that anyone who knows the Town well will be able to quickly slot players into a system. You know that James Collins has an unbelievable work rate and that Andrew Shinnie passes metronomically, so you can begin to build a team around that.

You can also use the game’s tactics screen to give your team instructions on how to play. As well as choosing the system you’ll play, you can also tell the team how intensely you press, what passing style you’ll adopt and even to take pot shots from distance if you’re taking the lead.

But while Football Manager is similar to the real deal, you also have to adapt to the way it differs from the real thing. While football is all about how players informally take on roles like a ‘deep lying playmaker’ or a ‘ball winning midfielder’, Football Manager gives players favoured roles and positions that you have to blend together.

So while I set my team up thinking about Luton in real life, I also had to change up how we played slightly to make the most of the game.

Izzy Brown, for example, has a favoured role of a ‘trequartista’ in game, which is essentially short hand for a slightly lazy but very creative attacking midfielder or striker. He, therefore, didn’t make my starting eleven because I needed a harder working team to make my pressing work – despite the fact he’s probably a first name on the team sheet in the real world.

In the end, and after some experimentation away from the heat of competition, I settled on a 4-3-3 that emphasised quick passing, counter pressing and making the most of trickery out wide from Kazenga LuaLua and Callum McManaman. I spent time setting us up to be as effective as possible from set pieces. And then, we waited for the draw.

We got off to a good start by not getting started. Due to a strange number of teams taking part, a handful of sides got a bye through the first round. Luton were one of the sides to progress without playing and we were certainly happy to take a win without winning.

In the second round, we then got a decent – but tricky – draw. Mimicking what happened early in the current season, we drew Ipswich Town at home in the cup. And while we were favourites against a team sitting in a division below us, the Ipswich manager is the club’s official Football Manager researcher. This means he helped decide what attributes each player had at his club, suggesting he knew the side upside down.

Building up to the game, I was ridiculously nervous. Although I trusted the boys and felt like I had a good system set up, I also felt the pressure of being in charge of The Town. Fans were wishing me luck in the build up to the tie and I was desperate that we didn’t let ourselves down the first time we stepped out onto the virtual pitch.

Fortunately, we didn’t. In the opening 45 minutes, we took the game to Ipswich and put ourselves completely in charge of the game. We rushed into a 3-0 lead by half-time, with goals from Collins, Rea and LuaLua only slightly soured by a penalty miss that should have made it four. And while we conceded a sloppy goal shortly after half-time, we saw the game out 3-1 – mirroring the result from August in the real world. 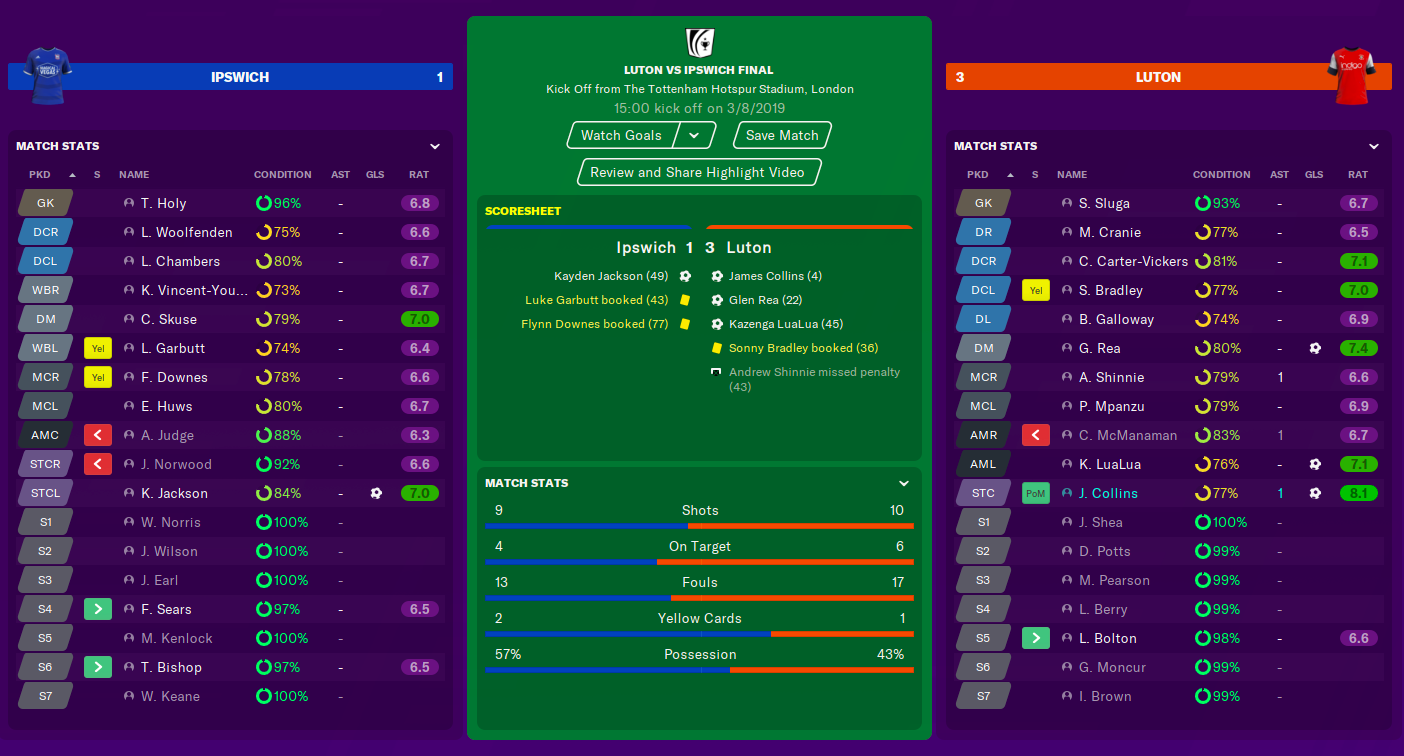 We proceeded into the last 16 and drew an away trip to Birmingham City. On the one hand, I was slightly relieved to have avoided both Brentford and Preston who had been recording impressive results against strong opposition. On the other, the Blues had thrashed Forest Green Rovers 5-0 in round two and had one of their real life players, goalkeeper Lee Camp, in charge of the first team.

Ahead of the tie last Tuesday, I did my homework. I went into the game to analyse Birmingham’s players, determine who the main threats were and to try to understand where danger would come from. I also set up a live stream on Twitch to let fans from both sides tune into a tense knockout tie.

Unfortunately, the 200 odd people who tuned in to watch two grown men play a football video game saw the Town succumb to a frustrating defeat.

The chief source of annoyance was the identity of the Birmingham City goalscorer. Despite marking their forwards out of the game, the Town carelessly conceded three times to centre back Harlee Dean, who grabbed all his goals from sloppy defensive work from set pieces.

This left the Town with way too much to do. While James Collins and Izzy Brown – who came on as a second half substitute - both found their way onto the scoresheet, the damage had been done by two Dean goals in the first 25 minutes. The Town were out of the EFL cup and my rein as virtual Luton manager was done. 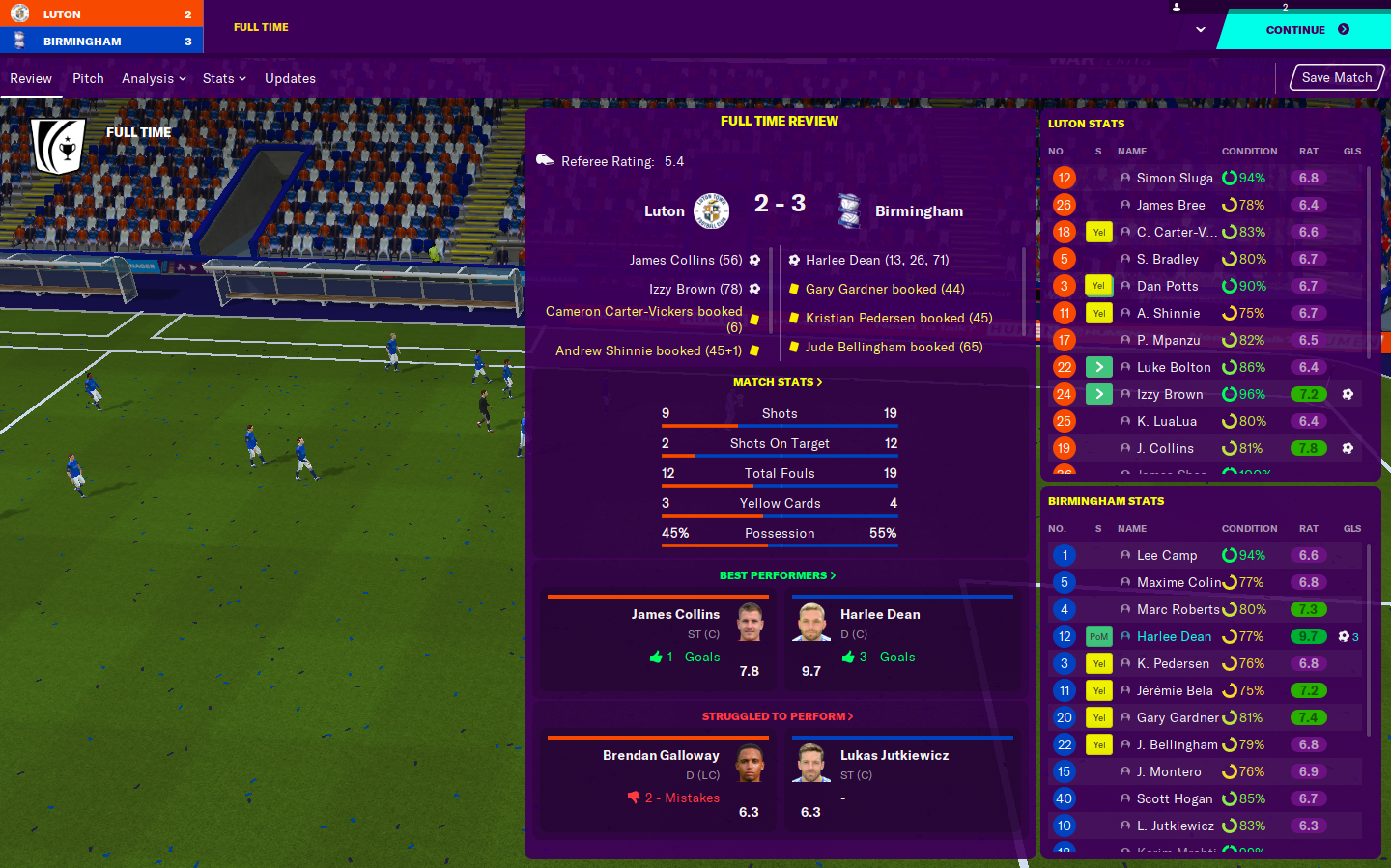 REFLECTIONS ON THE TIME IN CHARGE

So, what did I learn from my time in charge of virtual Luton Town? Well, even though the whole thing was definitely a bit silly, a few things stood out.

First, football management is definitely quite stressful. I felt stressed ahead of kick-offs; I was tense when the matches were taking place; I was ecstatic when we scored; I was devastated when we were defeated. Management isn’t easy and I feel a lot more sympathetic with anyone doing it properly.

Second, I learned, once again, how great Luton Town supporters are. Whether people were willing me to win before kick off, congratulating us when we got through or actively rolling out Luton chants in the text chat on Twitch, it was humbling to have fans get behind ‘us’ – even in a virtual football tournament.

Finally, and related to that point, it reminded me why we all love football: the sense of being part of something bigger. As well as being proud to take part in a national tournament fundraising for a great cause, I also felt like I was reconnecting with the community that surrounds the club and makes it so important to so many people.

The current crisis has, quite literally, forced us all apart. Managing Luton Town in the EFL Football Manager tournament brought me closer to a club I care about deeply and, I hope, did the same for the club’s many fans waiting for that time we’re all together again. 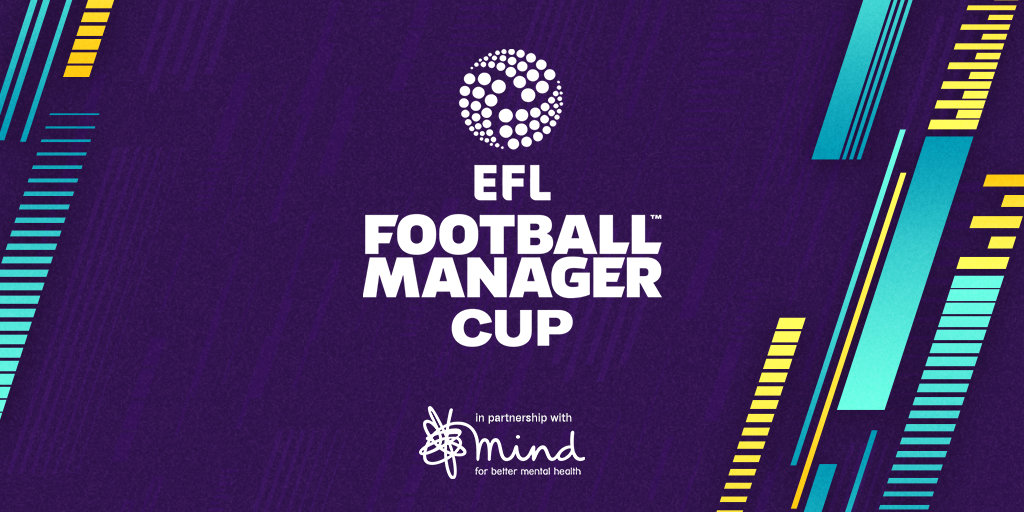