The Hatters squad returned to The Brache for the first time in more than nine weeks yesterday after training alone while the country was put in lockdown. Striker HARRY CORNICK tells us what it felt like being back at work with the boys...

It was like being back for the first day of pre-season – but nothing like it in many ways!

I did all my normal bits at home in the morning, filled in the online health questionnaire, had my lunch and then drove down to Luton – which is unusual in itself because we’d normally be in for breakfast in the canteen.

Every day at The Brache, I usually have a paper in front of me when we’re having breakfast and I’ll read the horoscopes out, but I’ll make them all up. Ell, Isted and Shins will be around, and I’ll say something like ‘Gemini has eaten too much haggis in the last week’, or ‘Andrew Shinnie has been playing the bagpipes too loudly recently’.

I was thinking about it last night when I got home actually, thinking about little things I miss so much – and breakfast club is one of the main ones I’ve been missing.

Anyway, back to yesterday’s training. I was in the third session, starting at 1.30pm so we couldn’t arrive any earlier than quarter-past.

We were outside the gates at 1.15pm waiting to be let in. It felt strange because we saw the previous group leaving as we were coming in, so everyone was winding down their windows and speaking to each other Harry Redknapp style, asking how everyone’s been doing because it’s the first time we’ve seen each other in two months. 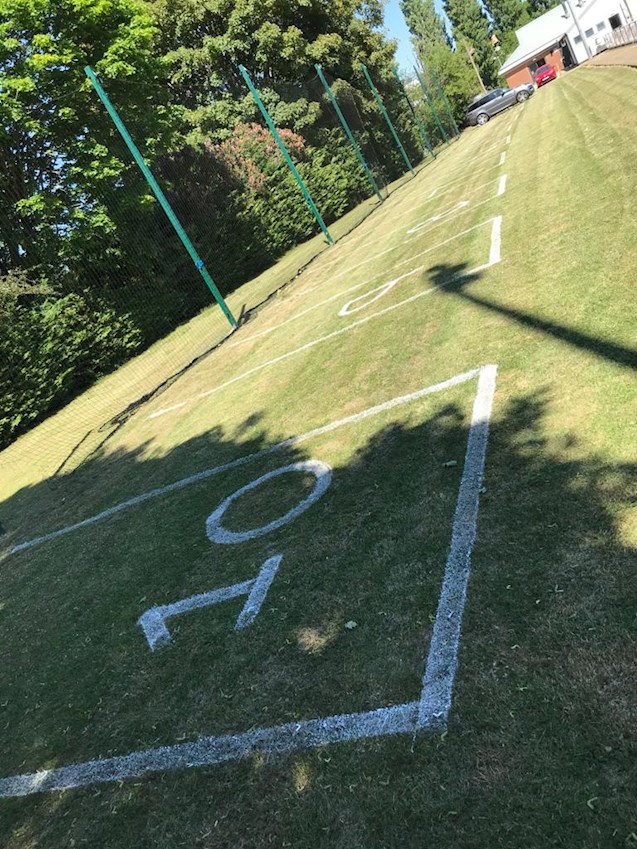 The first thing we did when we got there was park up in our new spots, which again is weird because we usually park outside Venue 360, but we had to park behind the 3G and in designated spaces so we were more than 2m apart when we got out of our cars.

But that was all smooth and we had to take the gym equipment out of the car that we’d had at home with us, and give it all back so it could be disinfected.

Then we went straight into our Covid test. Every morning the medical staff take your temperature when you get there and then when you leave, to make sure you’re not showing any symptoms.

We stood in marked out sections waiting for our turn, then you go to the outdoor station and blow your nose, then inside to the coaches’ changing room where Simon Parsell and Chris Phillips are in all their PPE, jazzed up to the max. Chris did my test. Simon was there to tell a few jokes and relax everyone! We’d done it last Thursday when no-one really knew what to expect, but it all went so smoothly. 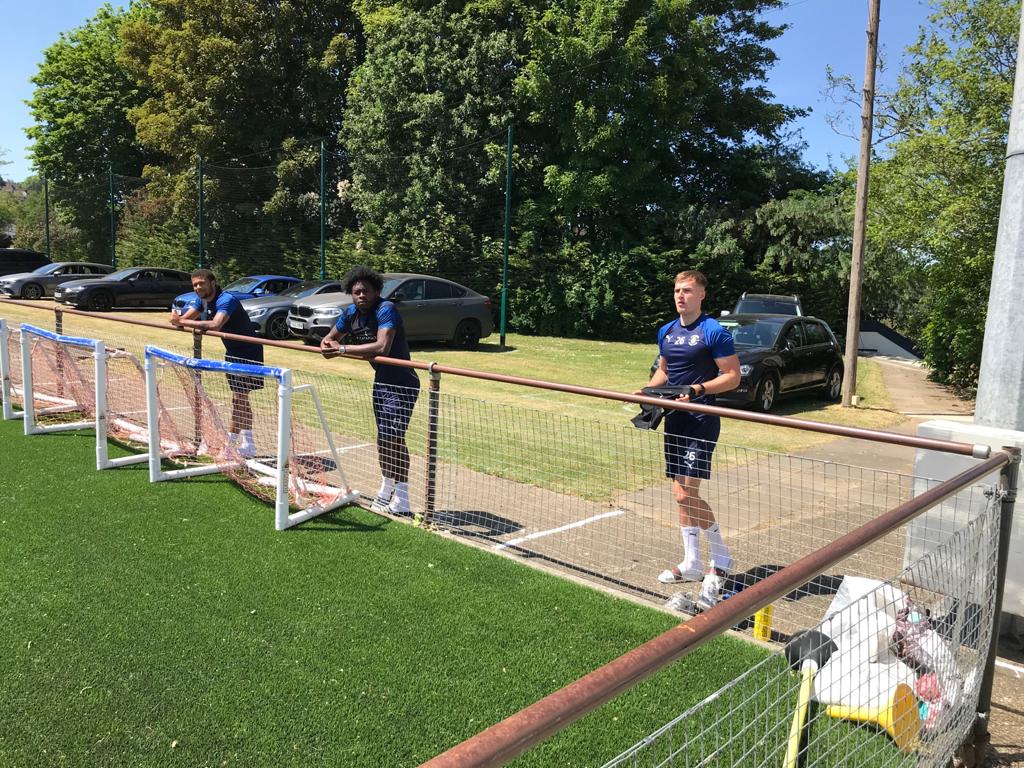 It’s massive when you hear the results come back negative. It fills you with a bit of confidence behind the process that everyone’s all-clear, and as long as we all stay safe and we can trust each other, I think that’s the great thing about this squad, that I know that nobody is going to be doing anything stupid. Everyone is going to be trying their best to get the season to go ahead by behaving themselves, which is nice.

We’ve been sent a return to training protocol from the club explaining what the rules are and we all had to sign and return it, to say we agreed. I’d rather it was all done safe and properly than a bit hit and miss – ‘Can we do this? Can we do that?’ They’ve literally done it to the point where you know exactly what you can and can’t do, and you have to stick to the letter of the law.

After the coronavirus test there was a foam roller and a mini band set out for us on the 3G pitch, two metres apart, in our group, so we got on them and just did a bit of foam rolling while we waited for all the tests to be done.

The coaches all came over to say hello – Mick, Forbesy, Planty (Elliott Plant) and all of them were there – and were just having a chat, seeing how people have been for the past two months, but all the time staying 2 metres apart. Again, that’s quite strange because on the first day back for pre-season, normally you’d give people a hug or something, and it’s not nice not to be able to do that. If we see Mick in the morning, we'd normally shake his hand or give him a cuddle, but it’s just got to be done.

Planty then did pre-hab, and it was just good to have a bit of banter with them. Just little things that I take for granted so much, like being able to have a laugh and joke with someone because they are part of your team and they just get you, which is nice.

The group that I do all the stuff with is Frankie, Pete and Pelly, but on the pitch next to us were Isted, Elliot, George, Cal Mac and Breesy. It’s a great group because I get on really well with all of them, I do with most people, but if I could pick five people – my top five – they could all be there really. It’s a strong, strong group and I was happy with them.

We then went into a six-minute yo-yo, which is just a warm-up jog really. It’s not strenuous. They get a baseline fitness for us, so they know how we are getting on.

Then we did ball work, just basic passing drills in our four, and my touch was as normal…not the best!! 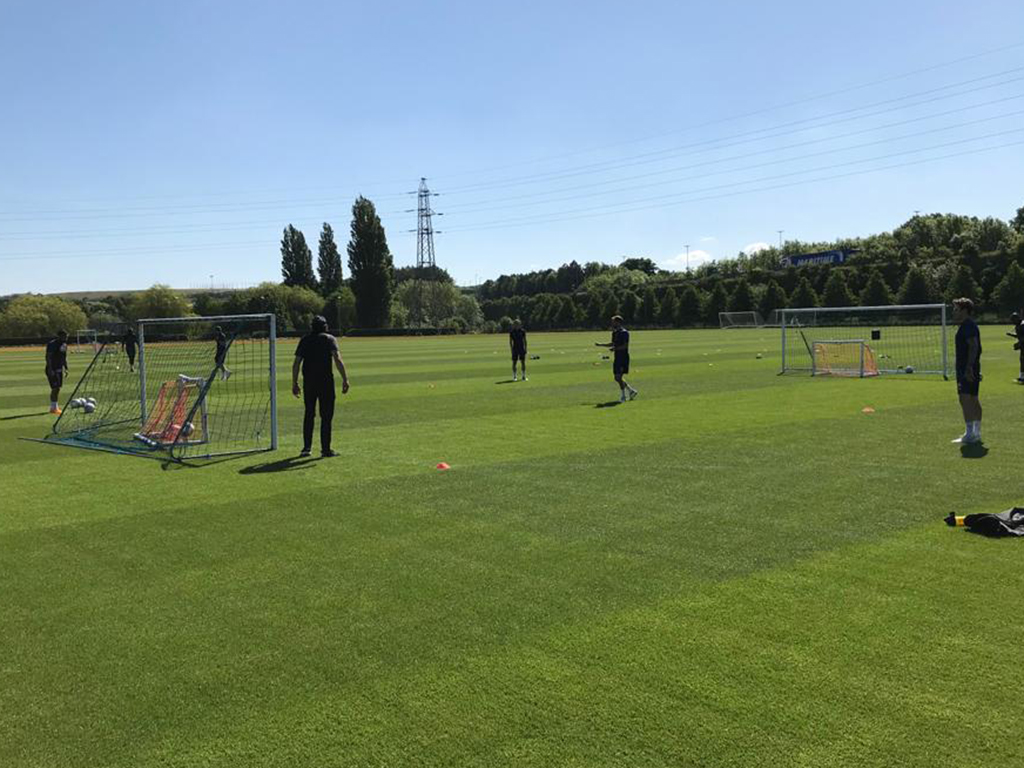 Then it was on to the dreaded 1500m run. It was horrible. It was me against Frankie – and Frankie has annihilated me! He’s obviously been doing lots of 1500s over the last eight weeks. That’s all he’s been doing, I’m sure of it, because I was a lot closer to him in pre-season – and now he’s flown ahead of me. He beat me by quite a way.

I lapped Pell and Pete – but Frankie had finished, and I saw that he had, and I was thinking ‘I’ve still got 100 metres to go here, bloody hell’.

After the 1500 we did another bit of ball work, where we had to pass the ball into the mini goals. No goalies, and I was gutted about that, but I was trying to get away with seeing how hard I can kick it without Redders telling me off for kicking it too hard!

Then we did acceleration work, not even near match pace, but that’s the thing – in lockdown we’ve been getting club programmes but it’s so hard to recreate you running at 100 per cent. In fact, I don’t think I’ve run at 100 per cent in eight weeks, really.

I’ve tried, and you can get close. But until you’ve got a ball in front of you, or a defender chasing you or you’re chasing someone back, it’s so hard to hit that top speed, so I’m going to be getting to that soon, hopefully.

After that we did gym, which was all right although Planty thinks we are stronger than we are! It was his 30th birthday yesterday and to celebrate he decided to do about 80 clap press-ups, which was mental!

The gym was in the five-a-side cage, but the club are doing it all properly. Everything gets disinfected straight after you’ve used it. I even saw Kev Dearden with the disinfectant bottle disinfecting the balls after we’d used them, so it’s nice to see him doing some work! 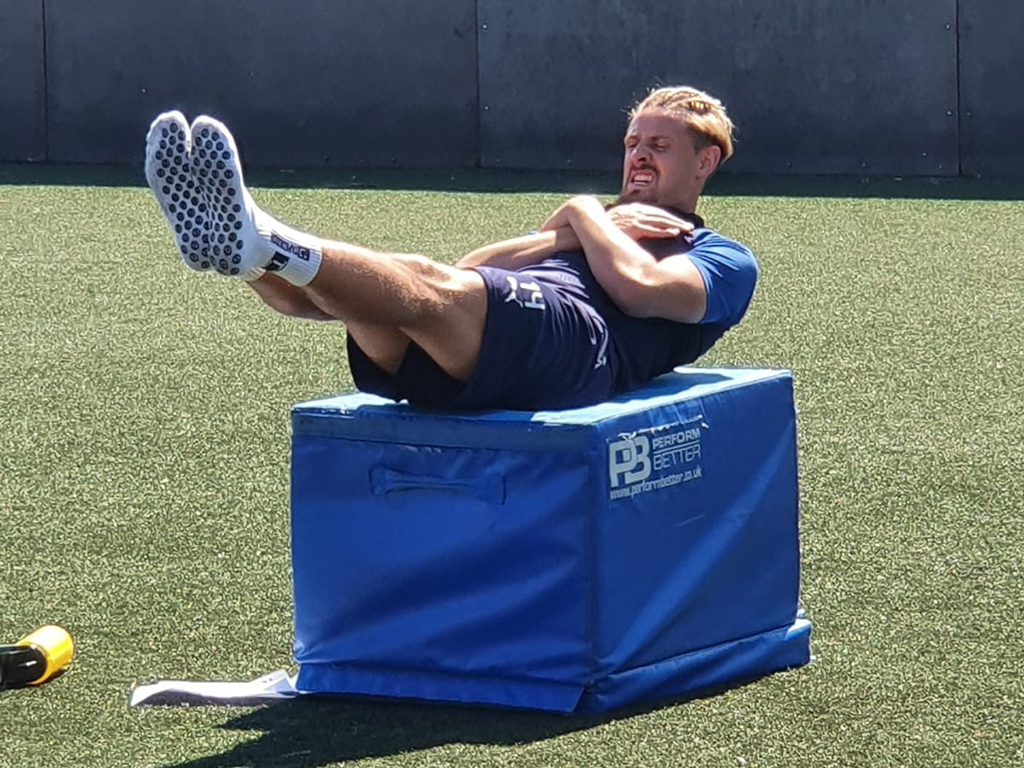 Finally, we put our heart rate monitors down to be cleaned but we take our GPS vests and all our kit home, because we’ve got to wear our kit in and then take it home. We are used to Daz the kitman doing it all for us and laying it out every morning for me, so I’m sure over the next few weeks I’ll start to appreciate him more!

We had food ready for us to pick up, a wrap made for us individually by head of catering Cristhiano – although he put tomatoes in mine which I had to dispose of appropriately in my car! The rest of it was nice though and everything has been thought of for us, so absolutely no complaints.

Then once I was home it was time to strip naked in the hall, put the kit straight in the wash at 60 degrees and jump in the shower myself. The kit was all soon hanging out to dry in the garden – I am quite domesticated now. Nothing like when I broke Jack Stacey’s washing machine for weeks with my trainers!

Overall, it was good to be back, everything was well run and all went according to plan with no dramas, which is a good sign. Looking forward to the rest of the week now and confident it will all become normal and we can get back to playing soon.