Tonight's classic campaign on iFollow Hatters is the 2013-14 season when John Still's side swept all before them in that record-breaking romp to the Skrill Premier title. It ensured a return to the Football League after five long years away, and below the manager who made it all possible tells how it happened in his notes from the end-of-season souvenir programme.

The gallery above has some of the iconic images from that campaign, while below John's notes is a link to the pdf of the celebration brochure, which you can click on to read ahead of watching all the action this evening...

Well, where do I start? What a fantastic season.

A wonderful journey which cumulated in the league title and promotion for this club back to the Football League.

Our last home match of the season against Forest Green was important for so many reasons, not least because we wanted to end our campaign at Kenilworth Road in style.

But the manner of the performance typified the players’ attitude throughout the season. To go a goal down and bounce back to win 4-1 was terrific and it was the perfect lead-up to the very special celebrations afterwards that saw us handed the championship trophy.

The celebrations of that day will live long in my memory. Indeed the whole season will be etched in the memories of the players and staff and, of course, you the supporters. Having been crowned champions on a day when we were not playing – and with still three games to play – I must take my hat off to the players for remaining professional in the pursuit of records.

To then go and show the determination to break them by winning 100 points and scoring 100 points is a real testament to this group of young men. Winning the league is fantastic – it was, naturally, the first thing we wanted to achieve, but to break as many records as we did added a little bit of cream to what we accomplished.

The outpouring of emotion of this season’s achievement has been truly unbelievable and the scenes after the Welling, Forest Green and Hyde matches are things I will never forget. I’m sure this is also the case for my hard-working staff and the players. Winning titles does not happen every day so this season is one to cherish and treasure.

It is difficult to summarise the whole season but this is how I see it: We started slowly but steadily picked up steam and hit a rich vein of form where we were scoring goals at will. It was fantastic to be involved in and even more exciting to watch.

I think if I had to pick a highlight, I’d plump for either Alfreton away or Kidderminster, Wrexham and Hereford at home. Those performances are up there with the best.

On the flip-side of the coin, there were the gritty displays at Macclesfield, Barnet and Cambridge, whilst the home win over Barnet – in the worst conditions I’ve ever seen in my career – showed all the qualities required to be champions.

I would like to thank, wholeheartedly, the contributions of all the players. Their effort and determination in training has pushed others on. So, to the whole squad, a massive well done.

As I’ve said in some interviews, the board’s support of me has been absolutely first class. It gave me real delight to see the smiles on their faces when promotion was confirmed.

I know it means a great, great deal to all of those involved. A big thanks for their support – and for employing me in the first place!

The support from the terraces has been one of the biggest highlights of this incredible nine months.

I don’t particularly want to look too far forward but the work will continue and it will be done so using the same philosophy, the same belief and the same work ethic.

This club can keep progressing but needs to do so in the right way. The right way has proved to be okay this season.

In closing I think it would be wrong not to touch on the fantastic occasion we enjoyed in Luton town centre for the civic reception and the open-top bus celebrations.

Some people told me what to expect but I never expected to see so many people – what a fabulous day.

We were fortunate weather-wise and it will be one of those things that will stay with me forever.

Now, though, is the time for us all to enjoy the summer break and look forward to the next step on the ladder next season. 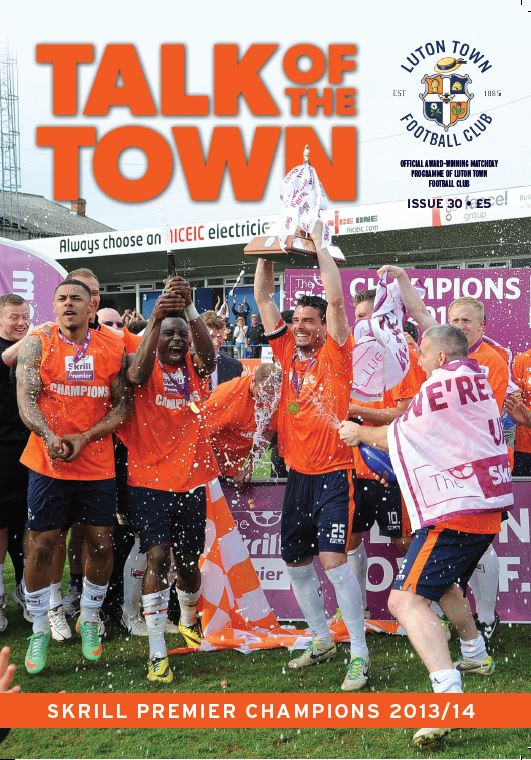