In an era consumed by disappointment and uncertainty, lifting the Johnstone’s Paint Trophy as we departed the Football League for the first time eleven years ago will go down as the beacon that offered us hope and certainty, a belief that the road back was visible.

It was a parting shot, powered by a collective sense of injustice, as we turned our backs on the fourth tier of English Football, that said to the football world, ‘Luton Town will be back, because we’ve got unfinished business’.

Facing up to a Scunthorpe side who went on to gain promotion to the Championship via the Play-Offs was always going to be a tough ask, but, spurred on by a 40,000 strong following at Wembley, you wouldn’t have known it on the day.

From the early stages, the tone was set by the midfield pairing of skipper Kevin Nicholls and Keith Keane as they mopped up loose balls with their characteristic tenacity, with Lewis Emmanuel and future captain George Pilkington making some crucial early interventions as the town rode out early pressure. This may have been a team cobbled together in the two days leading up to the opening game of the season, but led by Mick Harford, boy were they up for a fight.

Scunthorpe took the lead, but the Town brought the scores level with a wonderful counter-attacking move involving Rossi Jarvis, Tom Craddock and a calm finish from the on-loan Chris Martin. After being under the cosh in the early of stages, Luton went into the half-time break well in the driving seat.

Looking back, it’s obvious that this group of players was managed by club legend Mick Harford. They embodied everything that he stood for as a player – aggression, bravery, a never say die attitude, self-belief. With the likes of Nicholls, Spillane and unsung hero Pilkington in the ranks, a steely determination emanated from them throughout, an inner belief instilled by Harford that, despite all the politics and disappointment of the last few years, hope was on the horizon.

After enduring a long spell pinned into their own half midway through the second period, the Town responded with the exactly that kind of mentality, charging straight down the other end, and Craddock finishing with a delicately placed half-volley from the edge of the box. Even though Grant McCann drew Scunthorpe level late on, Luton held firm.

Then Claude Gnakpa came on, and wrote himself into Luton Town folkore, chasing down a long ball from Keane and dinking over the onrushing keeper, scoring what proved to be the winner. That ball seemed to hang in the air for what felt like a lifetime. Cue wild celebrations as 42,000 hatters go mad at Wembley and Luton see out the remaining 25 minutes to seal a famous cup win.

Looking back on that day in the sun at Wembley from the high orders of the Championship, it’s clear that, as the ball nestled in the net in the 95th minute, a new era had begun. Yes, we would endure five difficult years outside the Football League, but after all of the chaos, it marked a turning point where the downward spiral was halted, and the club could rebuild and lead us to where we are today.

Gnakpa may have stolen the headlines that day, but really every player on that pitch deserves to be talked about for years to come. Not least Mick Harford. We may not have known it at the time, but they built the marker that would start us on our journey back to where we belong.

TO READ A SELECTION OF REPORTS FROM THE FOLLOWING DAY'S PAPERS, CLICK THE IMAGE BELOW... 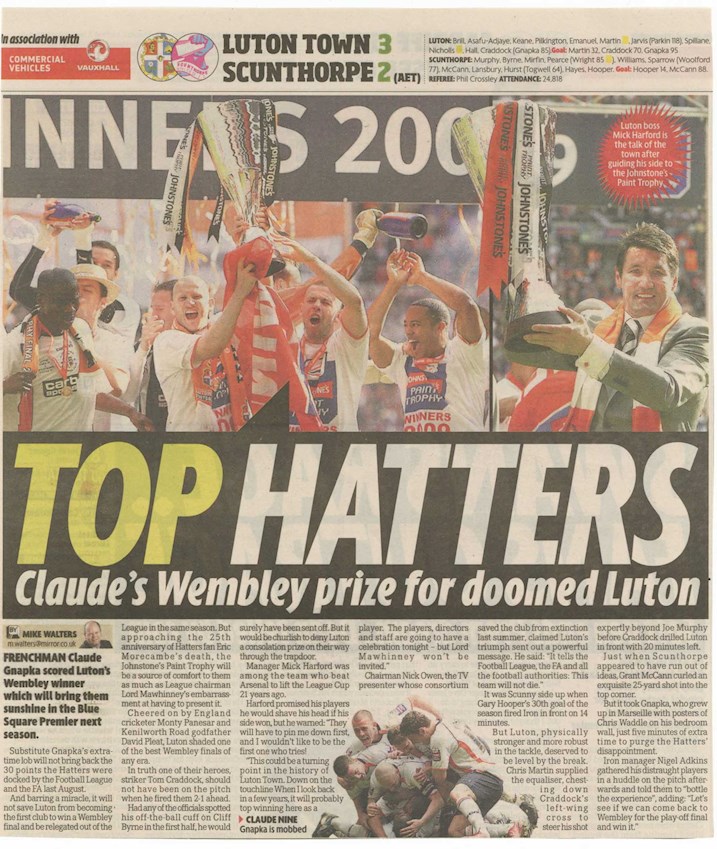