Tonight on iFollow Hatters, we will show the first of a series of Classic Campaigns that the Hatters have been involved in, with the first end-of-season club video reliving the 1981-82 Second Division title win. You will be able to watch from 8pm but over the course of the day, have a read of club historian ROGER WASH'S account of that memorable year and a flick through some of the pictures in the gallery above...

After the narrow misses of the two previous seasons, David Pleat was hoping for third time lucky.

In view of what lay in store, it must be said his summer transfer dealings baffled many supporters and appeared to make a mockery of the manager’s aspirations. Local boy Paul Price, for example, who had been at Kenilworth Road since leaving school, was allowed to go, signing for Tottenham for £250,000, while former skipper Alan West moved to Millwall for £45,000.

By far the most inexplicable transfer – as it seemed at the time – involved a swap, plus cash adjustment, with Brighton. Republic of Ireland international Tony Grealish moved to the Goldstone Ground with veteran Brian Horton coming the other way. As it turned out, the supporters were wrong to doubt Pleat’s judgment. Horton proved to be the final piece in the jigsaw, whilst Price and West were rarely missed.

The season opened with a home game against newly-promoted Charlton and, in a one-sided affair, the Town won 3-0 in a canter. QPR in midweek proved to be a much tougher proposition, largely because it was the first Football League game to be played on an artificial surface. At half-time the Hatters trudged off one goal down, with the players probably cursing the pitch, but in the second period, when they had acclimatised and realised there was nothing to fear, their superior technique turned the game around. Goals from Mark Aizlewood and a screamer from Ricky Hill secured a famous victory (pictured below). 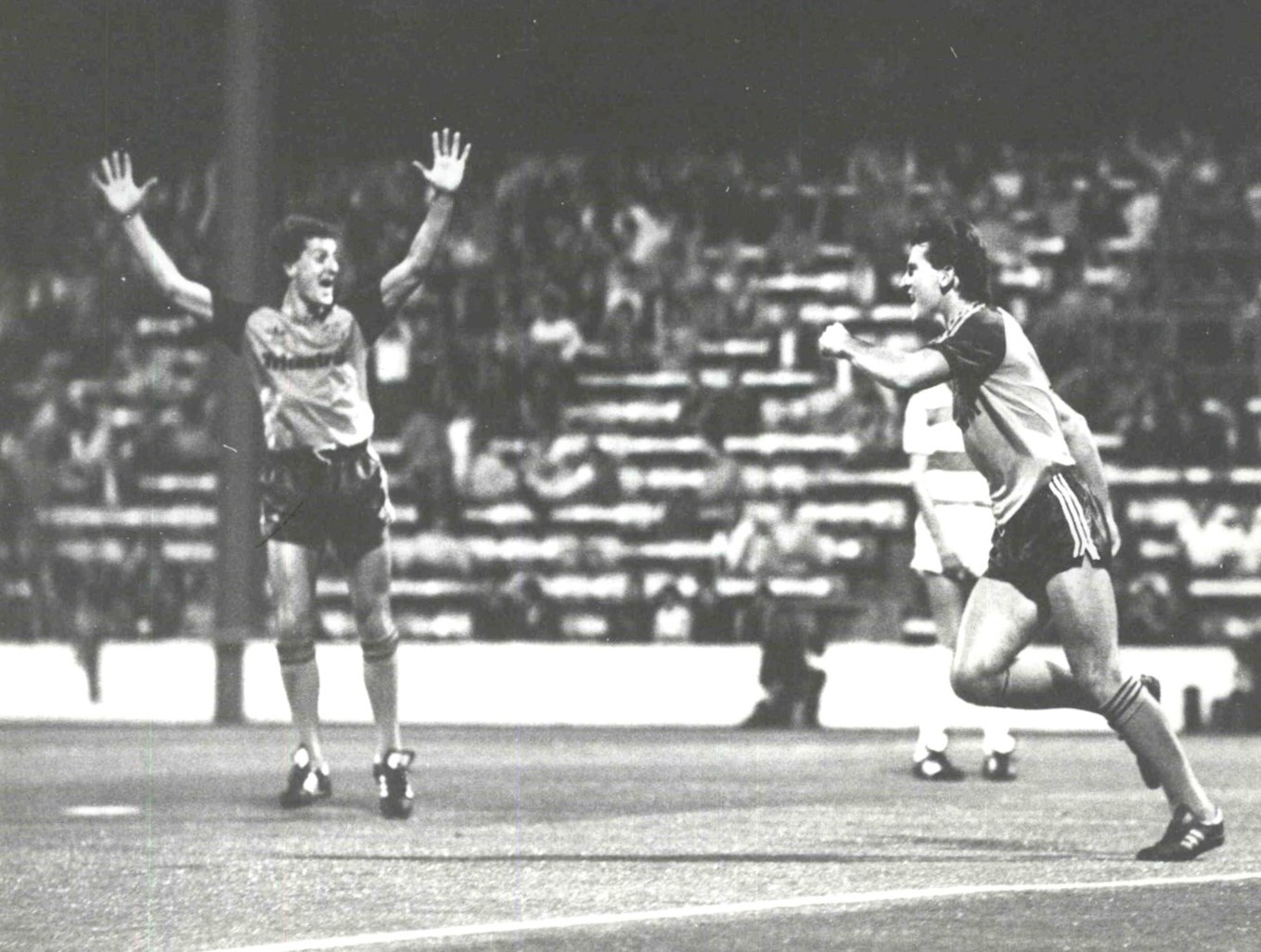 After winning at Bolton in game three, the Town were sitting proudly at the top of the table. In this they were helped by a change in the rules, which now awarded three points for a win instead of two.

Alas, much of the good work was undone when Sheffield Wednesday visited Kenilworth Road. They hammered the Hatters 3-0, reminding the players to keep their feet on the ground. The unpredictable early season form continued with a 2-1 win at Leicester followed by a 2-3 home defeat by a resolute Cardiff side. Pleat exhibited no outward sign of nerves following this latest setback, persevering with the same squad of twelve players four days later when the Town tackled Watford at Kenilworth Road.

In a sparkling performance, the Hatters ripped into the Hornets, finding themselves 3-0 up at half-time and going on to record a 4-1 victory (picture below), the biggest margin between the two rivals since 1936. A weight seemed to be lifted from the players’ minds, with the home hangover seemingly cured. Luton were destined to stay undefeated at Kenilworth Road in the league for the rest of the campaign. 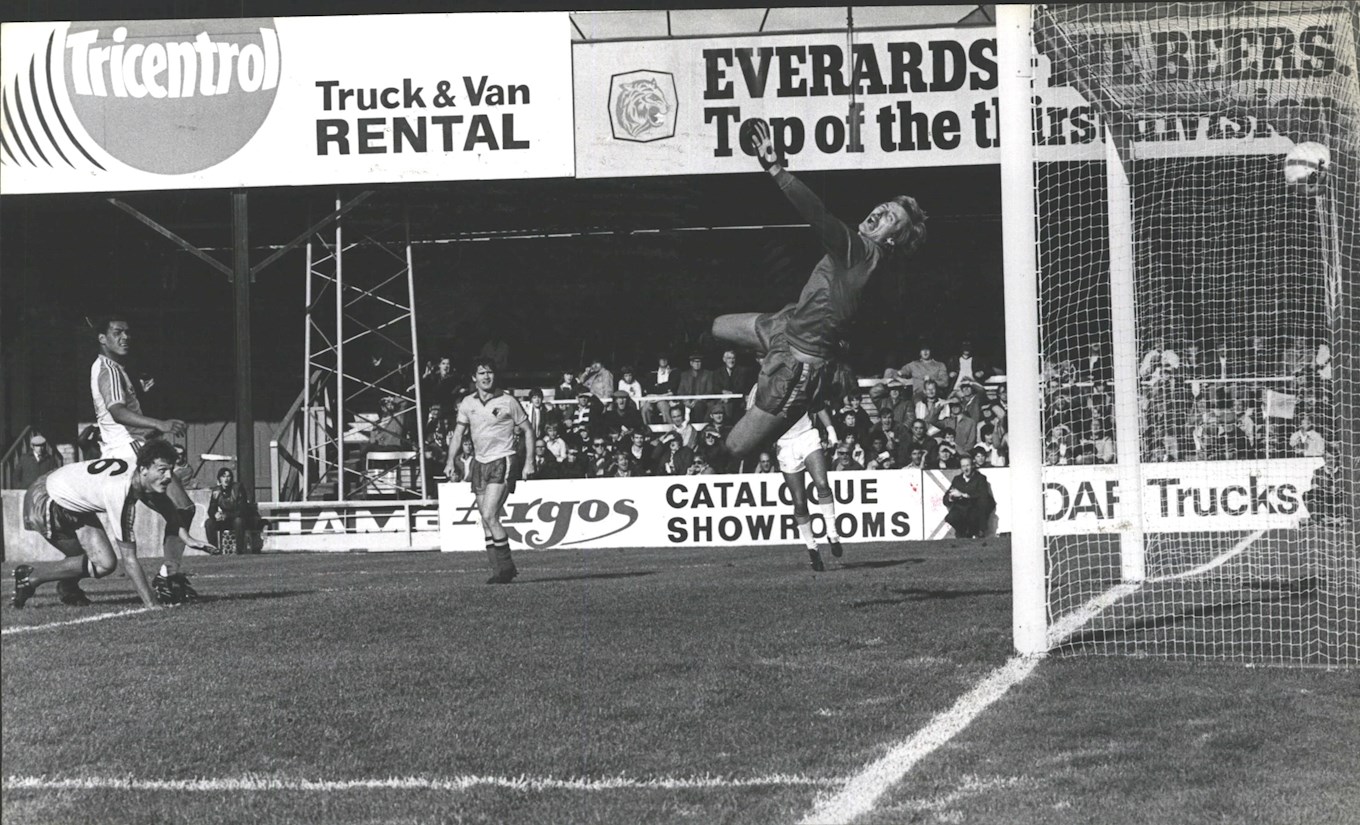 The 100 per cent away record continued with a 3-0 win at Orient, only to be surrendered in a 1-1 draw at Oldham. Grimsby were battered 6-0 at Kenilworth Road, with Steve White scoring four and silencing the barrackers who had questioned his ability, before the Town won at Wrexham for the first time ever, avenging a home defeat at the hands of the Welshmen in the League Cup.

Steaming away clear at the top of the table, the Hatters seemed without a care into the world, but an injury to defensive rock Mike Saxby in the home fixture with Crystal Palace threatened to undermine all Pleat’s plans. Twisting sharply in the penalty area, Saxby slumped in a heap and the later diagnosis of a cruciate injury meant that his playing days were over.

Luckily, Pleat had a ready made replacement in Clive Goodyear who, after a dodgy start, settled comfortably into the slot alongside Northern Ireland international Mal Donaghy. Goodyear was blameless when the Town finally surrendered their unbeaten away record at Newcastle at the end of November.

By Christmas, following a 3-1 win at Norwich when the Town scored three times in the opening 15 minutes (picture below), they had opened up a gap of eleven points over the fourth-placed side. With a game in hand, too, they seemed to be romping towards the title. The settled side were playing smooth, free-flowing football and it was difficult to see which of their rivals might be able to sustain a challenge to their dominance. 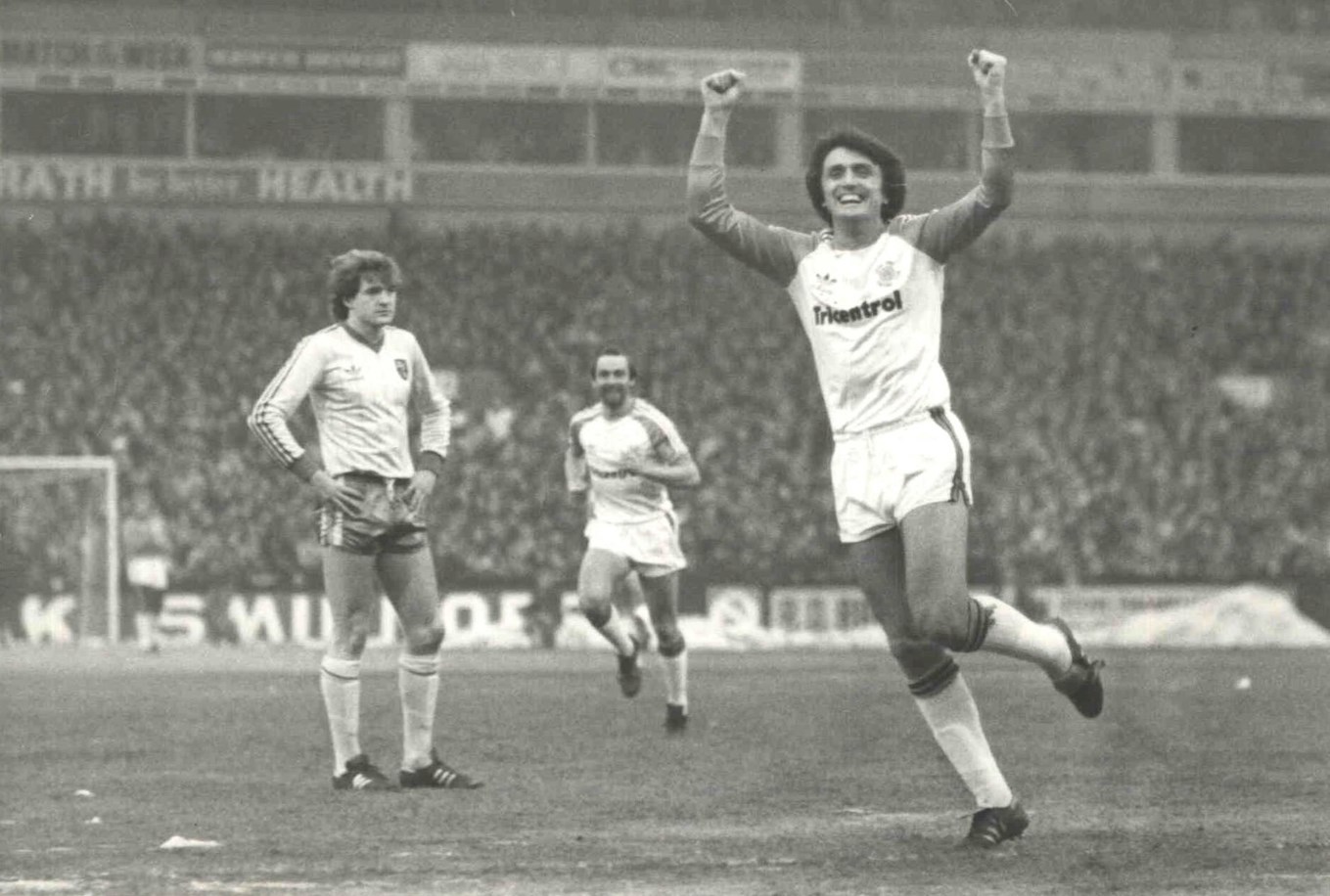 Brian Horton was nothing less than a revelation, using his vast experience to bind the midfield together. Leading by example, as well as playing a holding role, he allowed Ricky Hill to venture forward, safe in the knowledge that no holes would open behind him. On the left, the swift interplay between Lil Fuccillo and David Moss set up goals a-plenty for Steve White, whilst on the right, Hill and Brian Stein enjoyed a similar telepathic understanding.

Defensively, Kirk Stephens and Mal Donaghy provided cover for the emerging Goodyear and keeper Jake Findlay offered a stout defence of his goal to anyone who broke through. The only doubts in Pleat’s mind appeared to be over the left-back position: the supporters sensed that the manager was not entirely reassured by the defensive qualities of Mark Aizlewood.

After the Norwich win, inclement weather curtailed all but two league games until the end of January. The FA Cup began with a fortuitous win over Swindon, followed by a home thumping by Division One table-toppers Ipswich, who emphasised the gulf that divided the top two divisions.

The Town then hit another rocky patch, but such was the inherent quality in the side that only one loss was suffered in this period, 4-3 at Barnsley. To the supporters, who had become a touch blasé perhaps, a run of five games without a win seemed little short of calamitous.

Fortunately the indifferent run ended with a string of home wins. Top sides Blackburn, Norwich and Newcastle were all sent packing in quick succession. The run coincided with the purchase of Richard Money from Liverpool, to replace Mark Aizlewood at left-back.

Seen in retrospect, those three home wins were decisive in clinching promotion. A tough Blackburn side who took no prisoners, a Norwich outfit coming up fast on the rails, and a Newcastle team that sat back to try to protect a two-goal lead (pictured below), each came unstuck at Kenilworth Road as the Hatters turned on the heat. 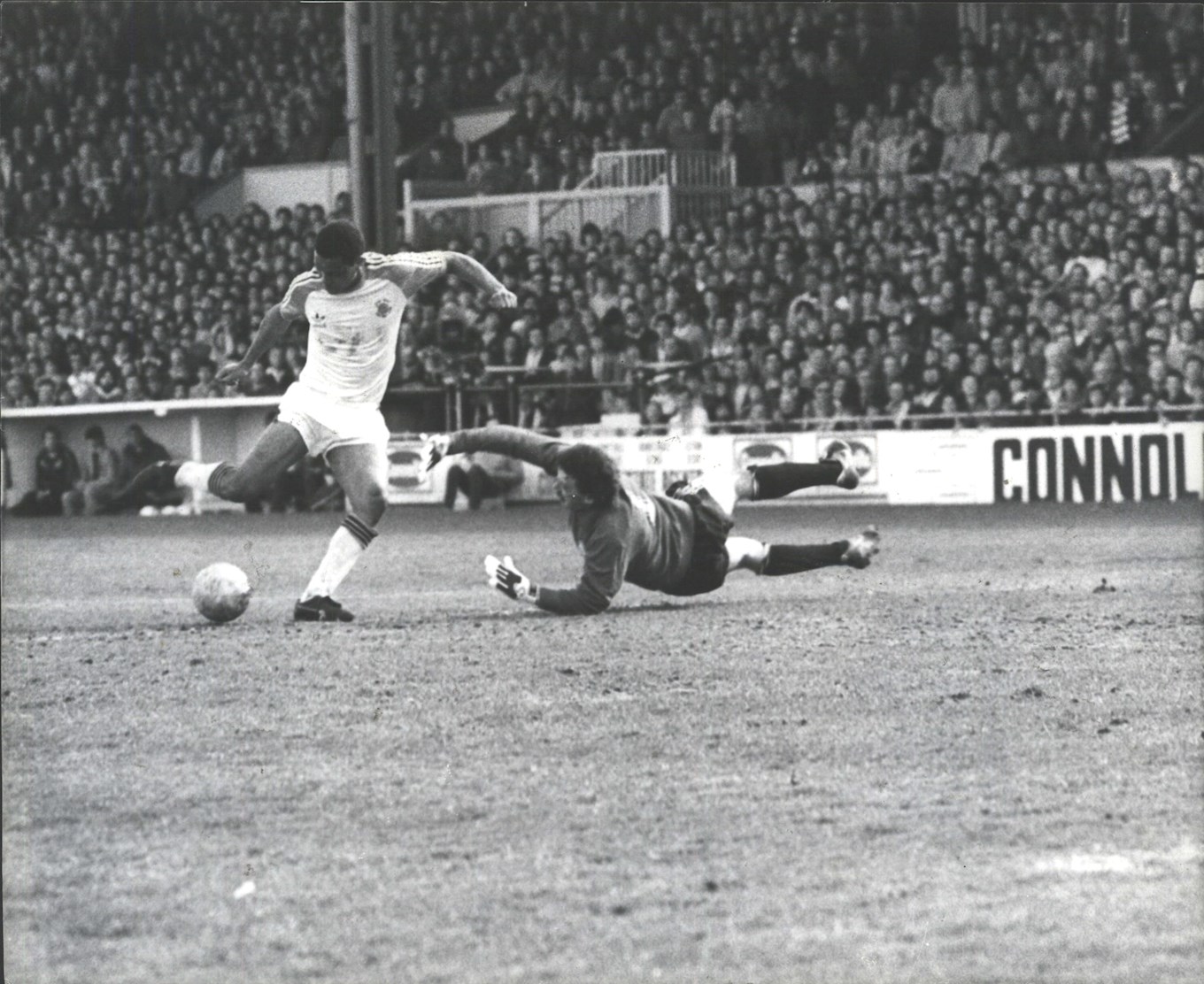 A 2-2 draw at Rotherham, where stand-in goalkeeper Alan Judge saved a last-minute penalty, meant that a win at home to struggling Shrewsbury the following Friday night would guarantee promotion. In a nervy game the floodgates finally opened and the fans surged onto the pitch to signal a 4-1 victory and promotion back to the top flight.

The championship itself was secured two weeks later with a 3-2 home win over FA Cup finalists QPR. At the conclusion of a long but enjoyable campaign, David Pleat had stuck to his guns and won promotion with style, the way he had always advocated. 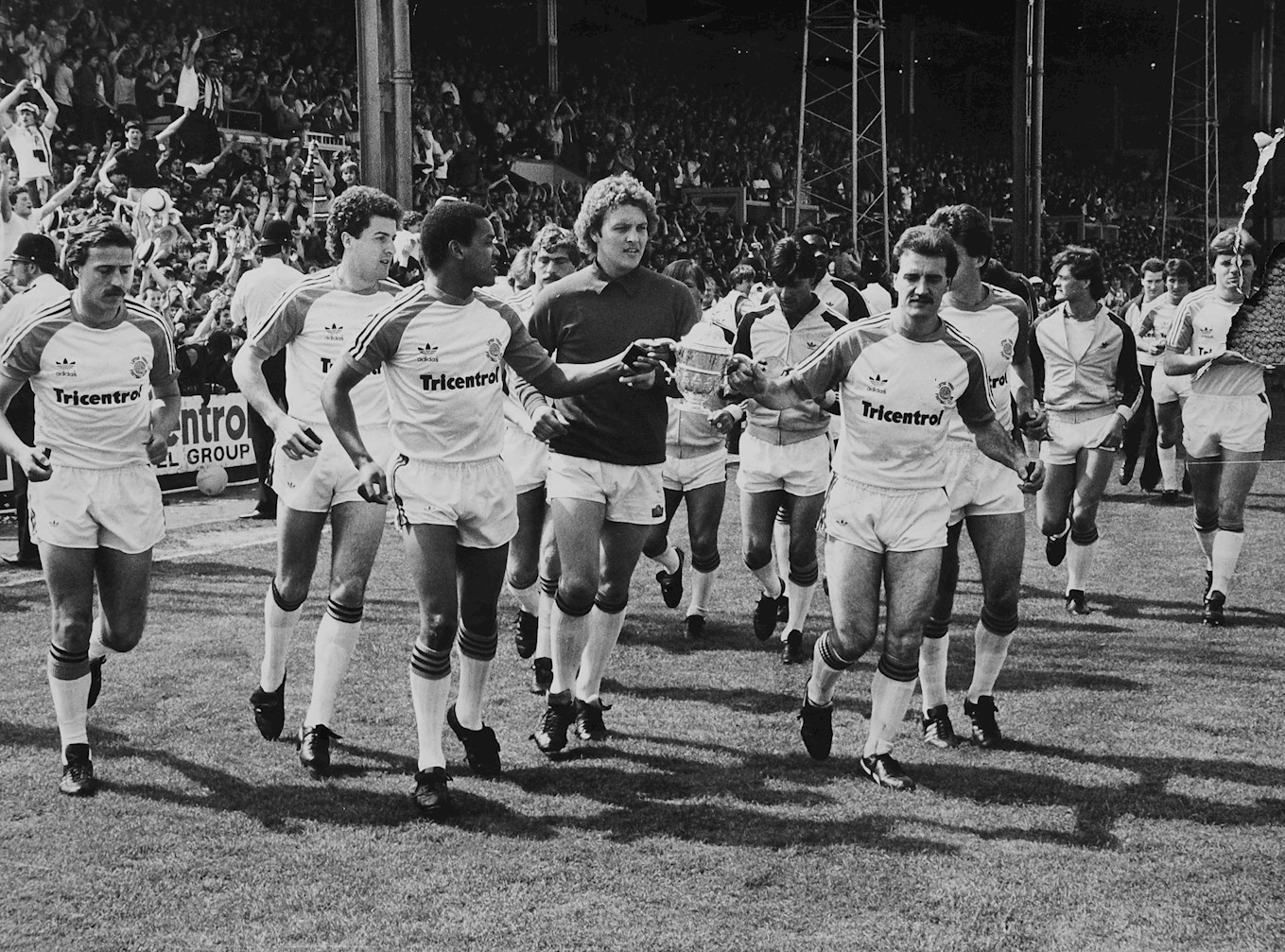