As a St George's Day special, we are showing the end-of-season video of the Town's 2004-05 League One title-winning campaign on iFollow Hatters this evening from 5pm. As a reminder of what happened during that classic campaign, when the championship was secured with a SGD win at Wrexham, have a read of club historian Roger Wash's review from his book '100 Years At Kenilworth Road'...

On the outgoing side the Town said farewell to Matthew Spring and Emmerson Boyce who joined Championship club Leeds and Premiership Crystal Palace respectively after rejecting new terms at Kenilworth Road.

Coming in were Rowan Vine on a season long loan from Portsmouth and making a welcome return, experienced goalkeeper Marlon Beresford. Also as good as a new signing was Paul Underwood who had been injured on his debut at QPR the previous March and was now fully fit.

If Luton Town supporters were completely honest they would have been quite happy with a mid-table place in the new season following the departure of the talented Spring and Boyce, but manager Newell was quietly confident that if suspensions and injuries did not get in the way the team could surprise a few people.

The Hatters opened up with dogged display in a 2-1 win over defensive Oldham at Kenilworth Road but then eyebrows were raised when the next two games, away at Swindon and Barnsley, were both were won with the first half performance at the County Ground particularly impressive. 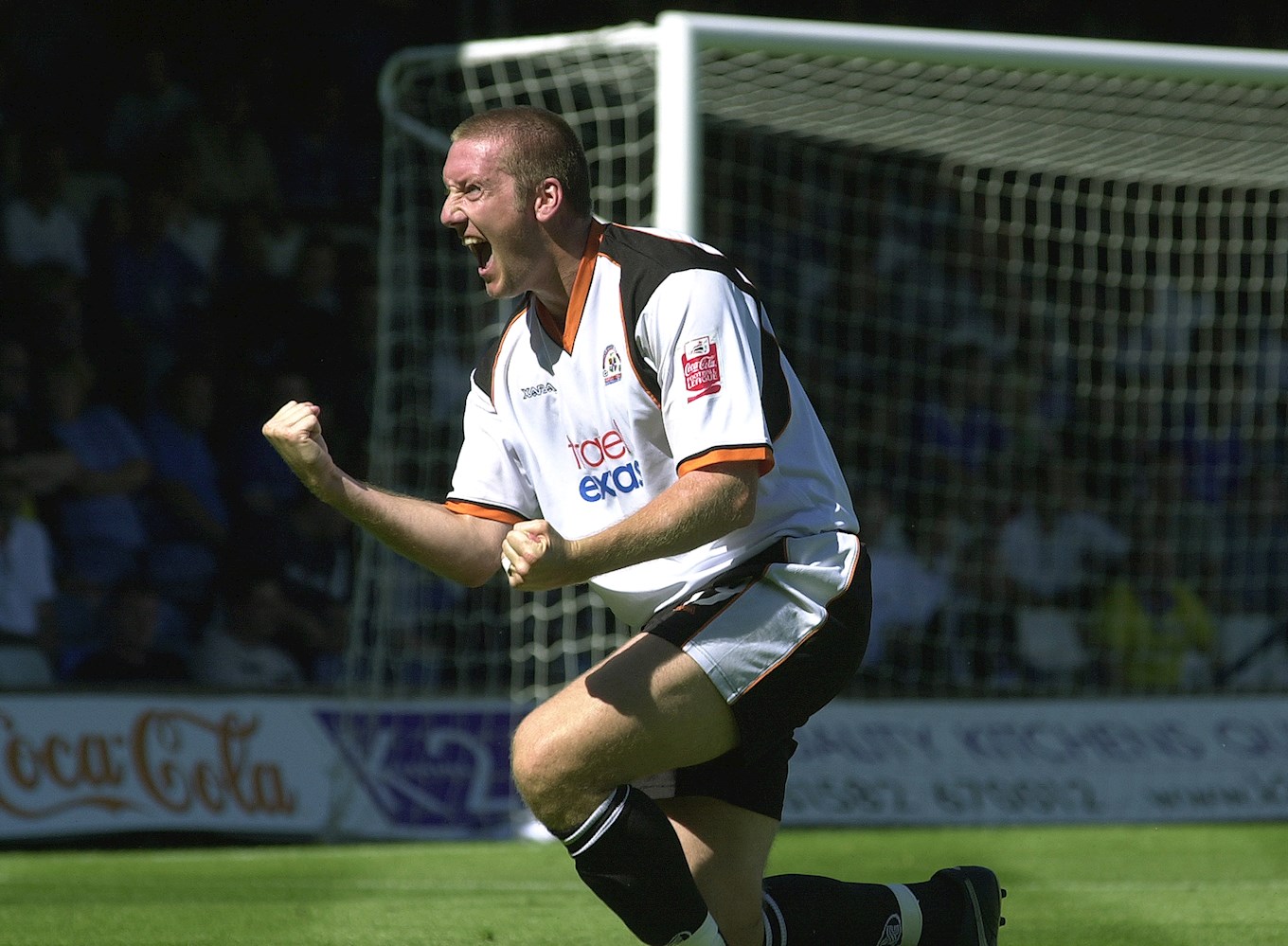 When Torquay were seen off at Kenilworth Road in game four the Town had beaten their previous winning run at the start of the season, the first of many records to fall over the course of a remarkable campaign.

It was not until the sixth game that points were dropped following a 0-0 draw at Sheffield Wednesday but the Town were now building up a healthy lead at the top.  Even when games were lost, as happened when in a remarkable week the Hatters went down to Huddersfield, Walsall and Hull, the team bounced back with two emphatic home victories which marked them out as future and well merited champions.

With inspirational skipper Kevin Nicholls and strong left-back Sol Davis shaking off their ‘bad-boy’ images and the queue for the treatment table down to a minimum the Town managed to keep a remarkably settled side.  The emphasis was on teamwork and a never-say-die spirit with the supporters not quite able to believe their eyes considering the troubles the club had been in only a few months before.

The loss of Mick Harford, who finally succumbed to the pleas of Joe Kinnear to join him at Nottingham Forest, did not appear to upset the rhythm of the team and as Christmas approached, a win at Bristol City, the first since 1973, and then a Boxing Day win at Saltergate, where Chesterfield had remained unbeaten all season, put everyone in good spirits for a happy New Year.

After the highly satisfactory Christmas, the Town went off the boil a little and a run of six draws from seven games enabled the chasing pack, led by Hull City, to close the gap at the top.

The Hatters were now only one point clear of the Tigers at the top and an all-ticket capacity crowd of 9,500 gathered at Kenilworth Road to witness the clash of the Titans.

Top scorer Steve Howard was suspended and in his place came ‘supersub’ Enoch Showunmi, while City were missing their top scorer Stuart Elliott. For added spice, the Tigers included ex-Watford skipper Andy Hessenthaler in their line-up, a player the Luton fans loved to hate!

To the delight of the Luton supporters the team was back to its pre-Christmas best and attacked Hull with a will, putting together slick attacking moves that had the Hull defenders in a spin.

Unfortunately, despite all the bright forward play the Town could not get the ball in the net and in the second period Hull tightened up considerably without ever looking like they would threaten the Luton goal.

The game appeared to be heading for stalemate, but with barely a minute left on the clock Steve Robinson, wide on the right, fired in a cross which was anticipated by the ‘Croatian Sensation’ Ahmet Brkovic, who nipped in between two defenders to power in a header at the near post. 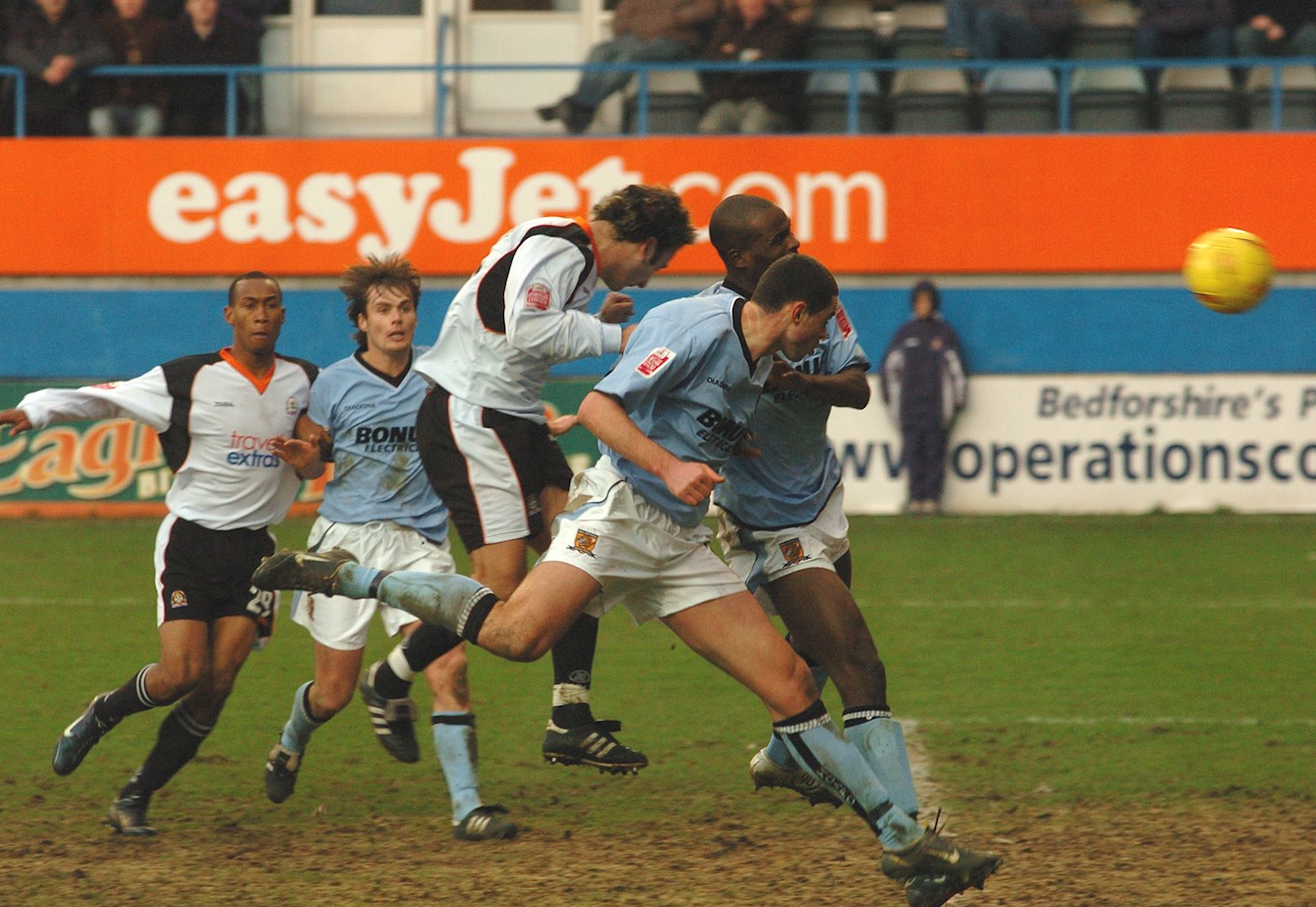 To say that the goal was greeted with delight is an understatement and with the other sides at the top dropping points a gap had opened up once more and set the Town up for the rest of the season.

The win over the Tigers certainly re-vitalised the Town, as the next three games were all won including an eye catching 3-2 victory at Hartlepool, where the home side were unbeaten and where Mike Newell, although publicly denying it, gained much personal satisfaction.

A barnstorming 5-0 win over Bristol City at Kenilworth Road was followed by a 3-1 home victory over Swindon as the Town laid to rest two bogey sides from previous seasons and although a 2-2 draw at Oldham was not up to standard, Luton supporters were looking forward to the Good Friday clash with Barnsley as it gave the chance to show off the team to the watching millions with the game featured live on Sky TV.

Sadly, the Town contrived to put in a woeful performance against the Tykes and went down to a 3-1 defeat although Barnsley did play extremely well on the day. The Town’s general form would have to remain the Luton supporter’s own little secret!

With the pessimists predicting a late collapse of epic proportions the team bounced back, as it had done all season, with an emphatic 4-1 win at Torquay on Easter Monday followed by a home victory over Blackpool.

The Hatters were now entering the final straits and a record crowd gathered at the Fitness First Stadium, Bournemouth to see if the Cherries could put one over the table-toppers and maintain their own hopes of promotion.

The Town had not won at Bournemouth since 1969 and their chances of breaking this particular bogey seemed to disappear when centre-half Russ Perrett was dismissed for a professional foul early on. Despite having a lot of the play, the Cherries could not break down a determined Luton rearguard and as the game entered its final quarter, they seemed to run out of ideas. 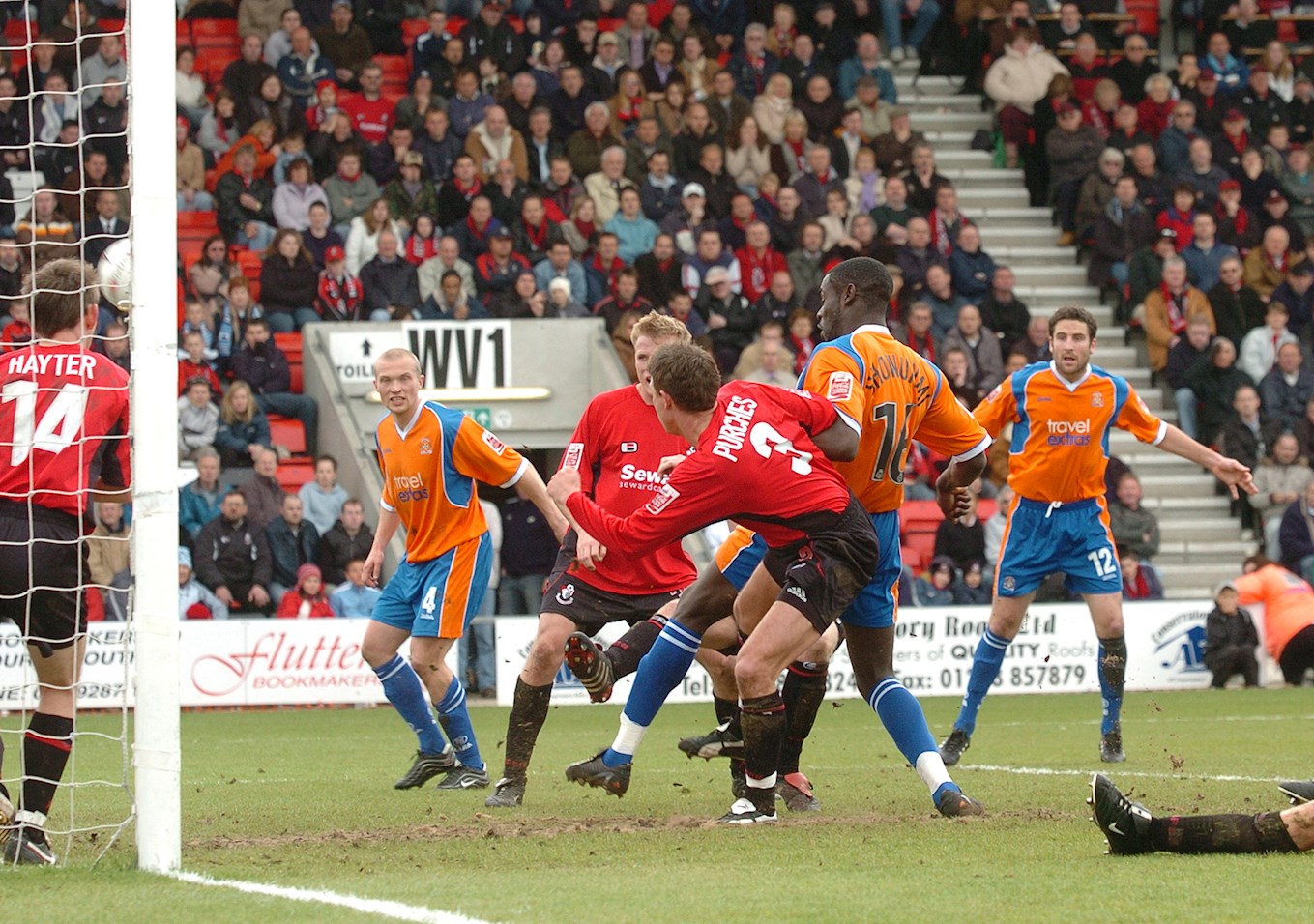 Given the circumstances, the Luton supporters would have been delighted with a point but they were in seventh heaven when substitute Showunmi, taking advantage of some hesitancy in the Cherries defence, stabbed home a priceless goal in the 84th minute. The celebrations went on long into the night as everyone knew that the Town were back in the Championship after nine years away.

Promotion was confirmed the following midweek when Brentford beat third placed Tranmere and a carnival atmosphere was evident when MK Dons were beaten 1-0 at Kenilworth Road the following Saturday.

With the Town winning at Wrexham and clinching the championship on the previous Saturday, and shattering another bogey at the same time, there remained one final hoodoo to conquer, that of beating the Bees. 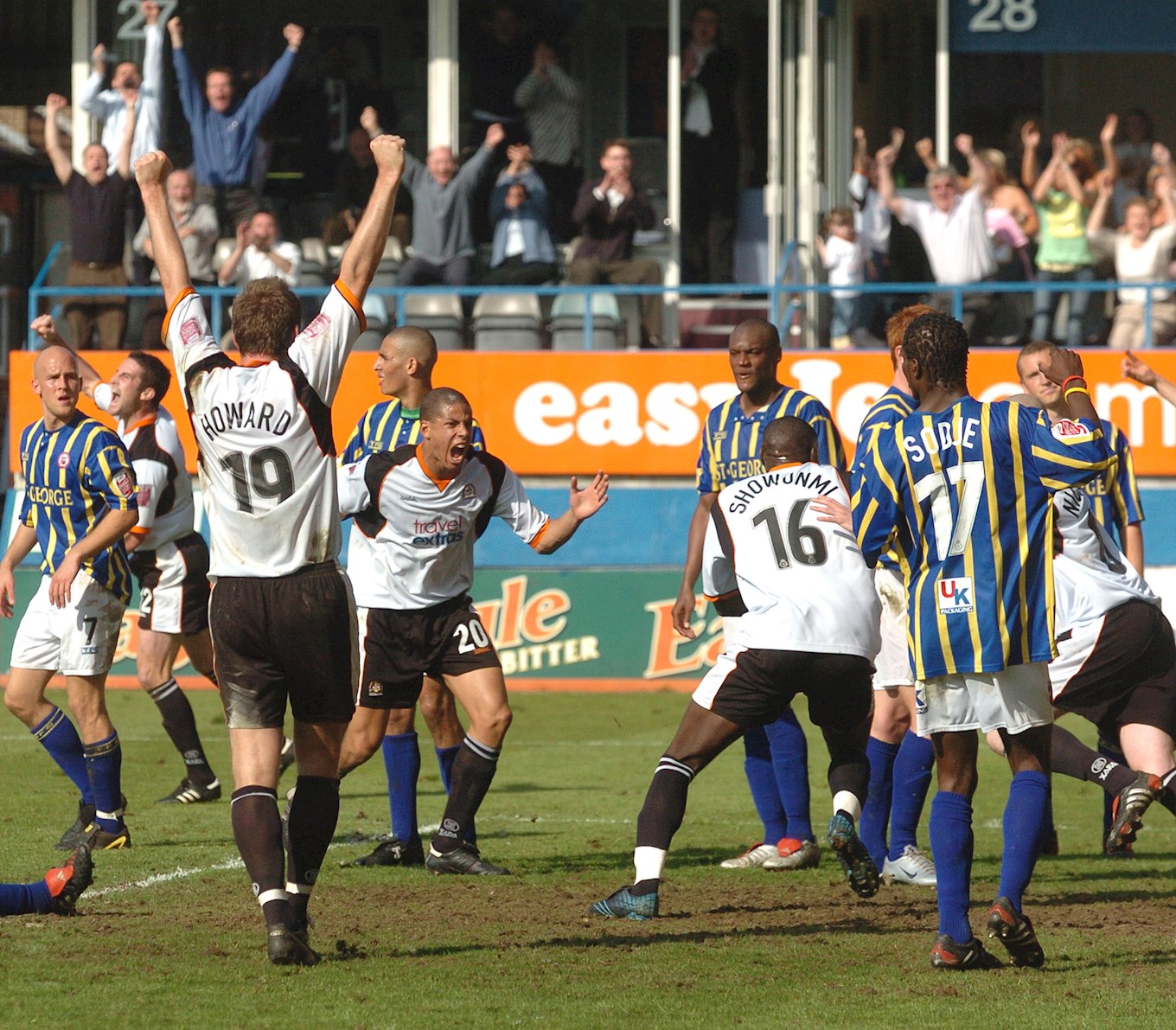 Brentford seemed to have the hoodoo sign over the Hatters during the campaign. The 2-0 defeat at Griffin Park in December 2004 came amidst accusations that the Bees management team had tried to influence the referee. Steve Howard was dismissed in a stormy match and on the final whistle the home supporters greeted the win as if they had won the Champions League.

The two sides were drawn together in the FA Cup at Kenilworth Road a month later and this time the Bees players used every trick in the book to slow the game down and not give the Town an inch. Although effective, the game plan was not popular with the Luton supporters and with the Bees then nicking two late goals it made it an afternoon to forget.

Brentford manager Martin Allen also did not endear himself to the Luton supporters with his exaggerated posturings and there were therefore several scores left to settle which a big Luton win would go some way to resolving.

An early goal from Ahmet Brkovic put the Luton supporters in high spirits but the Bees fought back and had scored twice before the interval through Sam Sodje and Deon Burton. Stringing five men across the middle in the second period, Brentford were quite content to hang on to their slender lead but they did not take into account the Town’s fighting spirit.

Skipper Kevin Nicholls and Steve Howard both hit the woodwork as the Bees lived dangerously but with six minutes left on the clock, Steve Robinson was brought down by Michael Turner in the box leaving Nicholls to level from the spot.

The drama and excitement were not yet over, however, as in the final minute that man Enoch Showunmi buried a header past Stuart Nelson in the Brentford goal and straight from the restart Robinson side-footed home number four after unselfish play from Rowan Vine.

Bees manager Allen had obviously been warned not to incite the crowd again and had to walk off the pitch to a chorus of jeers before the trophy was presented to the players who, in turn, saluted the crowd from the director’s box.

Sadly the Town could not break the magical 100 points total as in the final game of a brilliant campaign they could ‘only’ draw 3-3 at Doncaster. The supporters did not seem to care, though, as they turned out in their thousands to welcome the champions on their open top bus ride through the town. 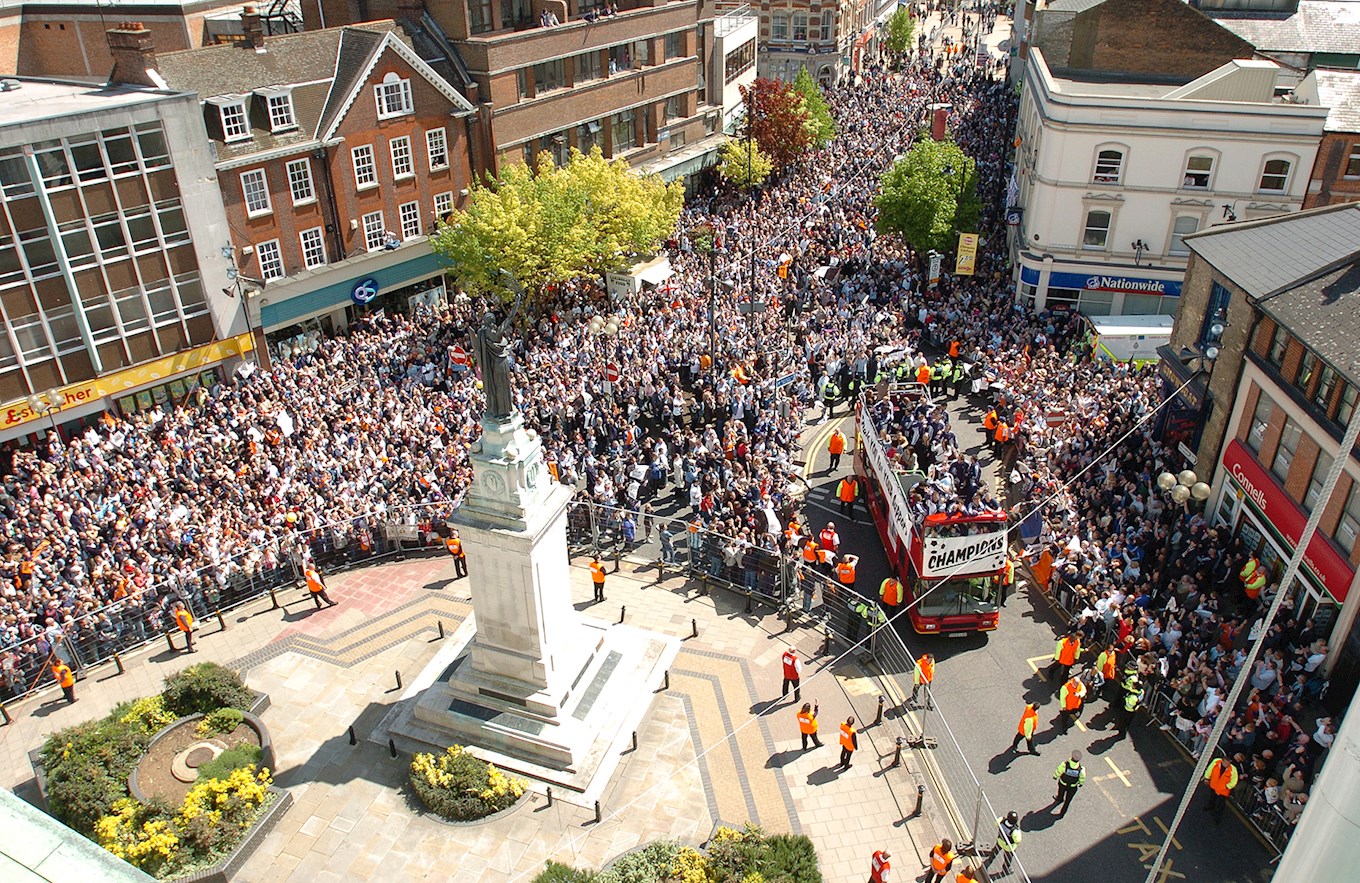