Luton Town are proud to support our three official charities of the year, but wherever possible we still do whatever possible to help other community schemes within Luton and Bedfordshire.

For our match against Portsmouth on the 29th January we welcomed Andrew Draycott from Carers in Bedfordshire to Kenilworth Road, along Luton Town supporter John Gurney and his nephew Kenson. John has been caring for his mother who has Alzheimers disease for many years, it's a role that he dedicates a lot of time to meaning that he doesn't get much time to himself.

That's where carers in Bedfordshire are able to help - by providing opportunities for unpaid carers like join to enjoy some respite from their caring roles with the help of organisations like Luton Town FC.

We're delighted to report that John had a fantastic time at the match, as did Kenson who picked a classic match as his first ever at Kenilworth Road. Our thanks to John, who sent SLO John Miller the following letter after the game.

As you know, I took my youngest nephew, Kenson Gurney (8), to his first ever big game.

Before the game, we got to sit in the home dug out, watch the players warm-up on the pitch and take photos with two of them. Then Kenson was one of the flag wavers as the players came out.

At the end of the match we were soaked, freezing and hungry but both very happy to have been there and watch such an exciting game. My nephew said is was brilliant and although he couldn't see all the goals, because people kept standing up in front of him, he really enjoyed the atmosphere.

I genuinely feel going to this match, being an evening game, the bad weather and atmosphere, really helped me as I felt a whole load of stress drain out of me. Taking my nephew helped too because it reminded me of my first game back in the 1970s. The fact Luton were attaching the goal we were close to, all of the first half, meant we got to see and experience wave after wave of the action.

Many thanks again.
John Gurney 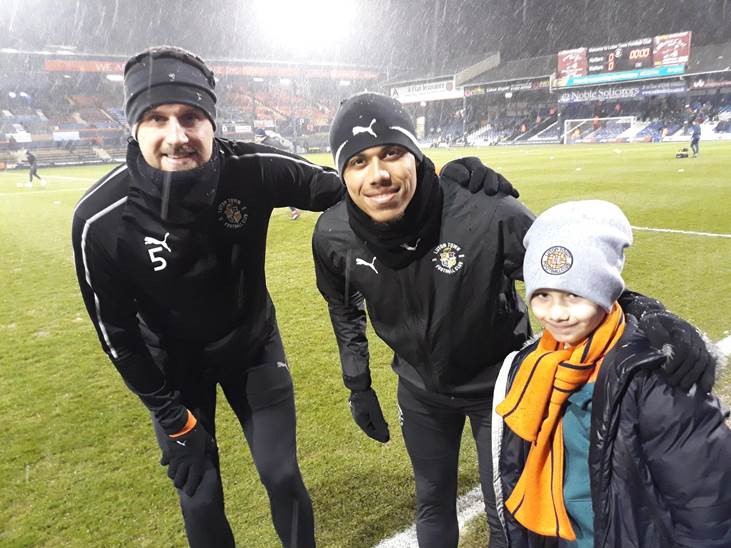