The Hatters welcome Fulham to Kenilworth Road on Boxing Day hoping to get back to winning ways.

After suffering a narrow 1-0 defeat to Swansea a matter of days ago, Town will look to rekindle their strong home form in-front of a sold-out crowd.

Fulham will have plenty of confidence coming into the game after beating Leeds United 2-1 on Saturday as they continue pushing for promotion back to the Premier League at the first time of asking.

On Simon Sluga returning to the side: “It was a solid performance, I’ve never doubted his ability, his mentality was right for it, it tells me he’s learned his lessons while he’s been out. I thought his individual preparation was different today, in terms of where he is mentally, compared to two months ago and overall solid.

"I thought he deserved a clean sheet, but the game’s not romantic. He’s a Croatian international, now I know early in the season he’s maybe struggled to adapt, but I was really satisfied with his performance today, as you just want people to learn their lessons in life.

“I think the Championship caught him out. English football caught him out. He’s had to sit back and watch James play. I thought he gave a very, very acquired, controlled display. I was really happy for him.

“He seems to be a crowd favourite here, I thought the crowd were brilliant, even coming off. You can’t fool Luton Town supporters. They know when everyone’s giving everything they’ve got, that’s what’s going on.”
On his time in charge so far at Kenilworth Road: "Apart from Brentford, which was a freak, we’ve been competitive in every game. I have seen huge improvements, but there have been improvements in other teams, it’s been a tough challenge. I think we were one win away today from 23 points from 23 games, which would have been fantastic.

On facing Fulham: "Fulham is a new start again for everybody. We'll have to get back to the drawing board and assess what's coming and make sure we get a team out that's competitive, and hopefully we'll turn a close game into a winning game on Boxing Day.
"We'll have to dust ourselves down because we know how potent they can be, but we gave them a right game in the second half down at Craven Cottage last time. We are now, sitting on 23 games, all the information on every single team, so at least now there are no surprises for the players. They know what's coming. You should be better for your experiences."
On responding to Saturday's defeat: "You need to be able to respond and I certainly won't be lying down. I don't think my players will be lying down because it's not in their nature. It's a tough one and we've got a tough challenge coming up on Boxing Day, but in football you never know. What we have to do is give everything we've got."

Former FA Cup and Europa League finalists, Fulham suffered relegation from the Premier League last season but look in good shape to try and get back to the top flight first time around, arriving at Kenilworth Road in fourth place.

Kick-off is 3pm at Kenilworth Road on Thursday 26th December.

In 15 games so far this campaign, Dean Whitestone has dished out 45 yellow cards and two red cards - both of those coming in his last outing in Swansea's 3-1 victory against Middlesbrough ten days ago.

A handful of tickets for this fixture are available as part of the season ticket buy-back scheme. These will remain available from the ticket office until 1pm on Christmas Eve, and online - subject to availability - over Christmas.

The two sides met in October and Fulham stole the bragging rights that day, winning 3-2 courtesy of an Aleksandar Mitrovic hat-trick.

In terms of overall record, the Cottagers claimed their 29th victory against Luton two months ago, while the Hatters still have 22 wins, as well as seven draws.

As the match is a Bank Holiday, supporters in the UK and Ireland who can't make it to Kenilworth Road or haven't been able to get a ticket can watch the live stream along with overseas viewers.

To do so, click here to purchase a £10 match pass so you don't miss a kick!

As a Boxing Day special, Simon will be joined on co-commentary duties by Hatters fan and English middleweight boxing champion Linus Udofia! 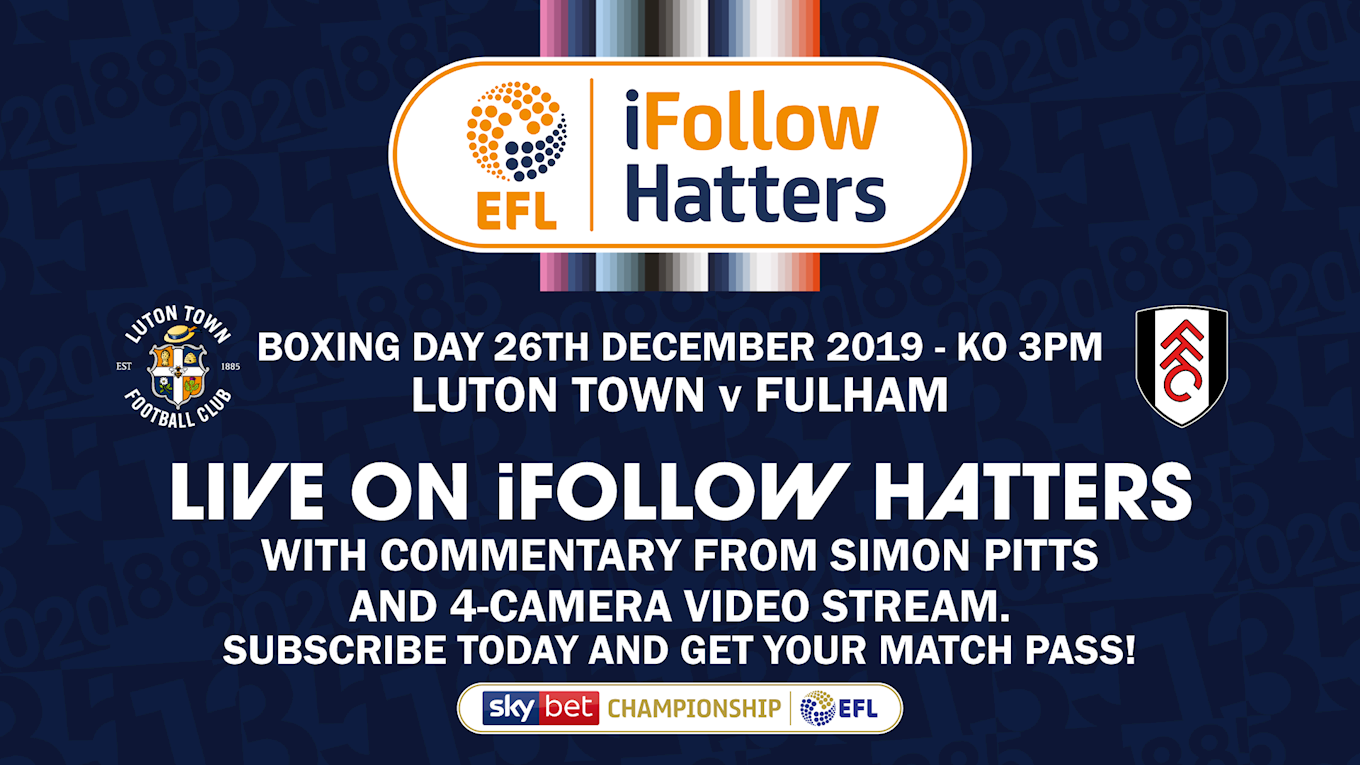