At the dedicated matchday, some of the families who have used the Neonatal Intensive Care Unit (NICU) together with staff and the L&D's Fundraising team and volunteers, will join forces with members of Luton Town Supporters Trust to shake tins, all in aid of the Parents Accommodation.

Six NICU graduates and their parents will also get to meet the players in a dug-out experience before the match kicks off, and will then welcome the players and supporters to the pitch with flags. At half time, L&D staff and NICU families will be invited down to the pitch to take part in Hot Shots and other activities.

Sarah Amexheta, Head of Fundraising at the L&D, said: "We are extremely grateful to Luton Town Football Club and their Supporters Trust for choosing the NICU parents accommodation as their Charity of the Year and for giving us the opportunity today for some of our NICU miracles and their families to come along, meet the players and supporters, and enjoy a great game of football!."

Funds collected on the day will go towards the £15,000 a year running costs of the NICU Parents Accommodation. Located next door to the hospital, it enables parents who are based a long way from the hospital to rest and sleep while being as close as possible to their baby on the unit. The aim is to create a home-from-home environment so that parents can get as much rest as possible without having to drive for hours each day, between home and NICU. The accommodation has three double bedrooms and a kitchen and is free for parents to use.

As part of the lead up to World Prematurity Day staff from NICU will also be holding a cake sale and raffle on Friday 16 November on the ground floor of Surgical Block at the L&D, to raise money for the unit. One lucky person will have the opportunity to win a signed Luton Town shirt!

Some of the families whose babies have been cared for on the unit will also be telling their stories. Today we hear from Helena whose son Theo spent five days on the unit a year ago. 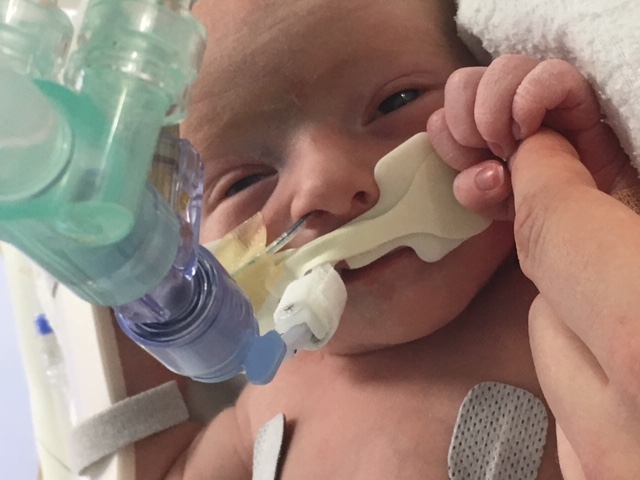 “Little Theo arrived in the world at 3.29am after 23 hours of labour. Theo was born too rapidly for his body to adjust; he wasn’t breathing and he was unresponsive. The red button was pushed and my partner & I were told not to worry as our new little boy was rushed out of the room. Dean wasn’t able to cut the cord as originally planned, but he was able to follow our son and take that all important first photo.

For 3 hours I was unable to see Theo and even then I wasn’t allowed to hold him; I had to wait until the following day but that was only for the shortest time. Theo had to stay in an incubator for twenty four hours, and was hooked up to a respirator, so we could only touch him through little access holes. Once he was taken out of intensive care we could actually hold him properly for the first time, he was still hooked up to feeding tubes but, thankfully, the respirator had gone.

I stayed in hospital for five days. Theo was moved to the high dependency unit I was able to go there every three hours to cuddle and breast feed him. Thankfully, Theo took to the breast straight away.

After three days, he was able to go into the special care unit where he stayed for two days. Then, five days after he arrived he was pronounced well enough to go home, finally!

The care we both received in NICU was incredible; the staff were amazing and I just couldn’t have asked for more from them. They were so supportive and friendly and took the time to explain what was happening in layman’s terms so that we could understand what was going on with our little boy. The staff didn’t try to hide the reality but were always positive which made us feel not only comforted, but valued, too.”

To find out more about how you can help support NICU contact the Fundraising team Fundraising@ldh.nhs.uk