Town's promotion-winning captain Scott Cuthbert has sent a farewell message to Hatters supporters as he departs Kenilworth Road this summer for pastures new.

After joining the Town in 2015, the Scotsman was a regular in his first two seasons at the club and despite suffering a serious groin injury last November that required surgery, he still played 25 times as Nathan Jones' squad won promotion to League One.

In total, the 30-year-old made 111 appearances for the Hatters and he sent lutontown.co.uk this message to pass onto fans:

"Thanks for all the support over the last three years. It was an honour to captain the football club and an even bigger one to be captain when the club gained promotion to League One. I want to wish everyone involved at the club good luck for next season and thanks for the memories!"

The other players whose departures were announced last Wednesday took to social media in the immediate aftermath to say their goodbyes.

Scott's fellow centre-back Johnny Mullins will leave at the end of his contract, with the former Oxford United captain agreeing a two-year deal with Cheltenham Town. 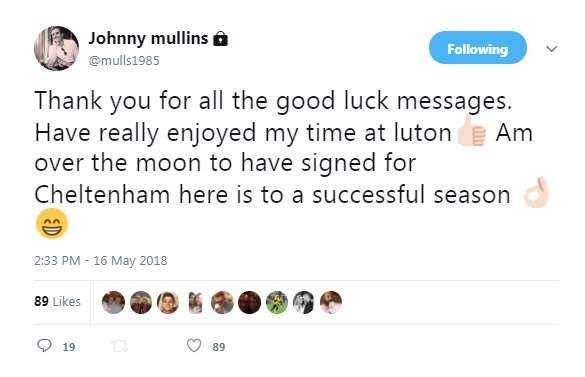 Midfielder Olly Lee, who played a key role in the heart of the Hatters' midfield in our promotion winning season will also leave, as he travels north of the border to join Edinburgh based side Heart of Midlothian on a three-year deal.

Jordan Cook will depart after two years at the club having joined from Walsall in 2016. He went onto make 58 appearances for us, scoring five goals.

Been an absolute honour wearing this shirt the past two years 🙌🏻👒 a great club full of good people and team mates I’ll always keep in touch with. Wishing everyone the very best in getting the club even higher up the leagues where it so rightly deserves to be @LutonTown #COYH pic.twitter.com/sRmS8a1sxl

Lawson D'Ath will also move on. He signed for the Hatters in January in 2017, starting in both legs of our semi-final defeat to Blackpool last season.

Been a pleasure to play for @LutonTown gutted I wasn’t able to get on the pitch more this season but that’s football. A great club that I will always now support. I wish the fans and staff all the best in the future. Soon be back at the top Where you belong! ⚽️🙌 #COYH