Hatters manager Nathan Jones has given lutontown.co.uk his views on the departure of six players from Kenilworth Road as part of this morning’s announcement of his retained and released list for the forthcoming 2017-18 Sky Bet League One campaign.

It was confirmed that four senior players – captain Scott Cuthbert, Jordan Cook, Lawson D’Ath and Johnny Mullins, who has agreed to join Cheltenham Town – will not have their contracts renewed when they expire on 30th June.

Teenage midfielder Kavan Cotter will also leave at the end of his first season as a professional.

None of the decisions were straightforward, according to boss Jones, who said: “It would be easy for us to have kept all four of those players – Scott, Johnny, Lawson and Jordan – because they have been wonderful servants to the club.

“They are excellent players and we were delighted with their attitudes. We had chats with them and they were difficult conversations, but not for reasons about it coming to an end. It was more a joint thing about how it would be beneficial for them to move elsewhere to play more regularly and progress their careers.

“There were arguments we could have taken them all forward, because they could play in League One. But their game time would be restricted and all round it is better that they move to other clubs where they will be key players.

"We thank them for their attitude and everything they have brought to us. It was hard parting with them, but it was the right decision all around."

Cuthbert, 30, has been club captain for the duration of Jones’ tenure so far, and the manager said: “With Scott, he’s been here for two-and-a-half years under myself, and he’s helped oversee the change in playing style and make-up of the squad. I would like to thank him for all his efforts because he’s been a great captain for me.”

Together with Danny Hylton, 32-year-old centre-half Mullins (pictured above with Cuthbert at the civic celebration last week) arrived from recently-promoted Oxford United as one of the Welshman’s first permanent signings in the summer of 2016.

“With Johnny, we brought him in because he was experienced at this level, having been promoted with two clubs, and we wanted to give him to help us get promoted and win another for himself,” said Jones. “He fulfilled that and we thank him. He’s been fantastic to have around the club.”

On midfielder D’Ath and forward Cook (both pictured below celebrating the former's goal in the Checkatrade Trophy win over West Ham U21s last December), who made just three and one league starts during the promotion campaign respectively, he said: “In terms of Lawson and Cookie, they both have enough quality to play in League One. We could have taken them forward, but I just felt that if their game time was restricted this year, it might be the same next year, which is not beneficial for either one of them." 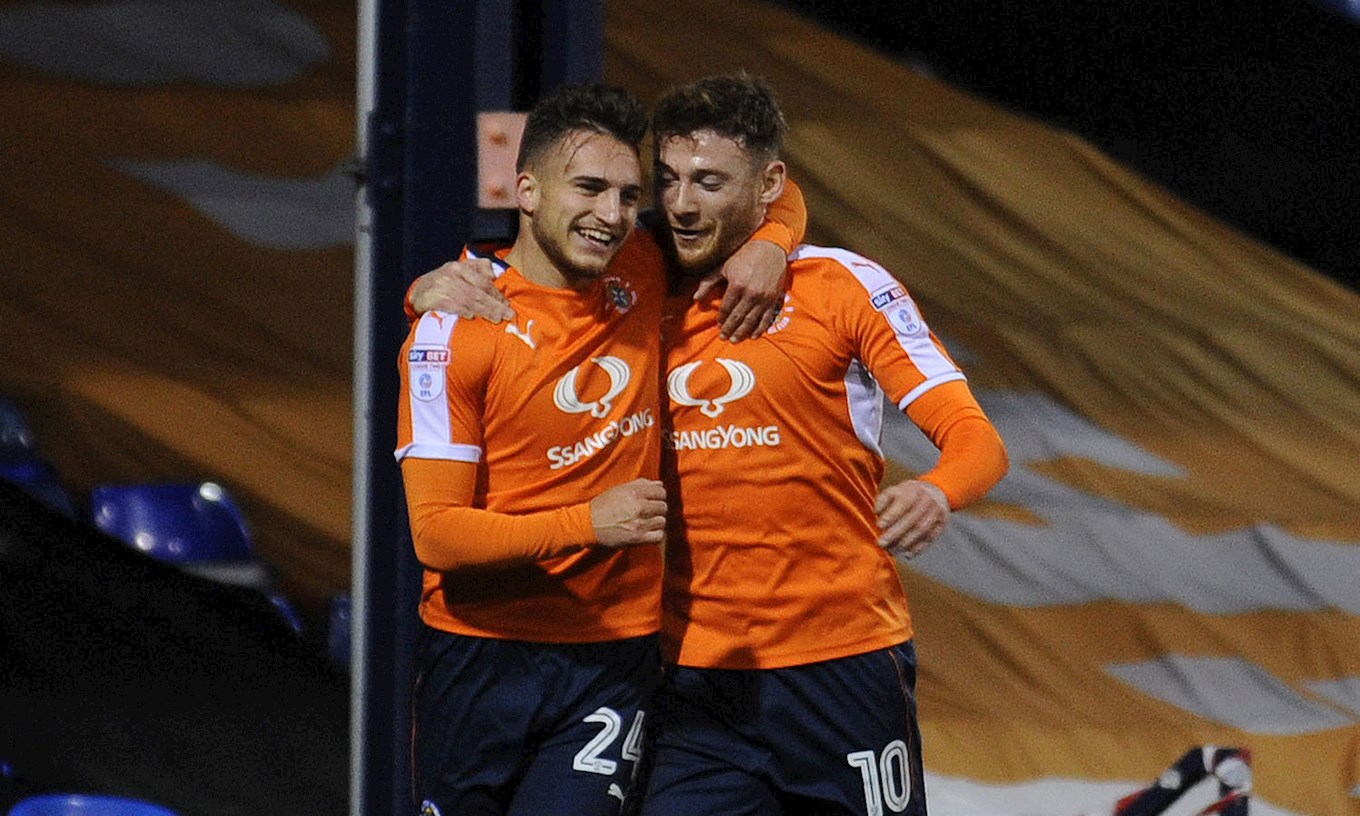 Jones gave Cotter (pictured below) his senior debut as a second-year scholar in the Checkatrade Trophy win at Gillingham in August 2016, and brought him back from loan at Hitchin Town – where he spent most of his only season as a Town pro, before ending it at Oxford City – to play, and score, in the win over West Ham U21s last December.

“Kav hasn’t quite hit the levels needed by what is now a League One side, so rather than keep him around, we felt it best that he goes and finds his own pathway. We wish him all the best and thank him for everything because he’s been a great kid. His attitude and everything has been spot on since the day he turned pro.” 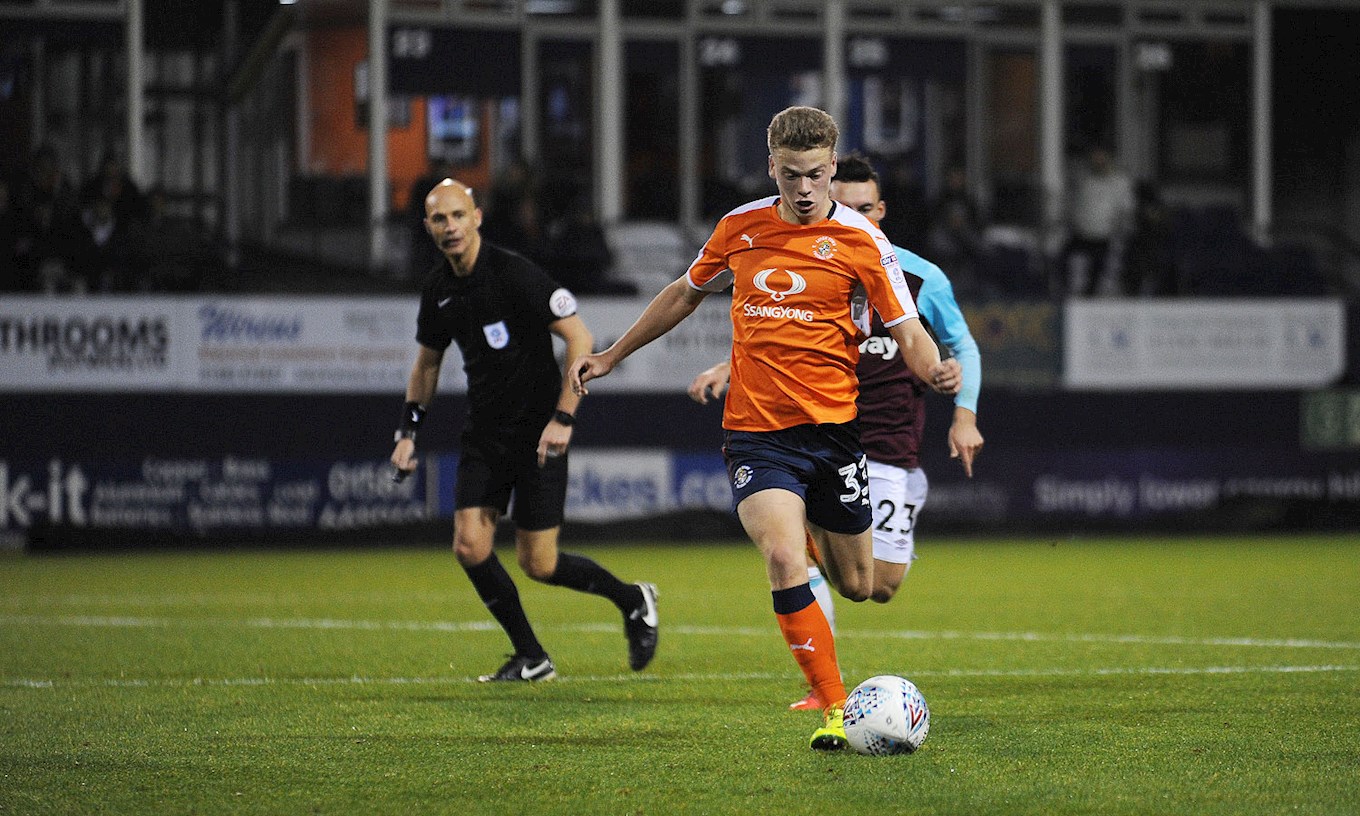 The other departure saw midfielder Olly Lee reject an offer to extend his three-year stay at Kenilworth Road in order to move to Scottish Premiership side Heart of Midlothian, at the end of a season in which he hit seven goals in 43 appearances, all but one in the starting line-up.

Jones said: “Olly has had a wonderful season. We offered him a contract back in January and he felt that Hearts would be a better place to progress his career, so we wish him all the best and thank him for the important role he has played in our promotion.”

With new contract offers out to Alan McCormack and Glen Rea, the gaffer added: “In terms of contract offers, there is a lot ongoing at the minute and we’ll update supporters as things develop.”