The Hatters youth team continued a wonderful few days for the club by winning the EFL Youth Alliance Cup for the second time in three seasons with a 1-0 victory over Wigan Athletic at Kenilworth Road tonight.

Inigo Idiakez’s side ran out deserved winners after a blistering start to the second half, during which Arthur Read saw a penalty saved before Ciaren Jones netted what proved to be the winner on the hour with a thumping header from the winger’s cross. 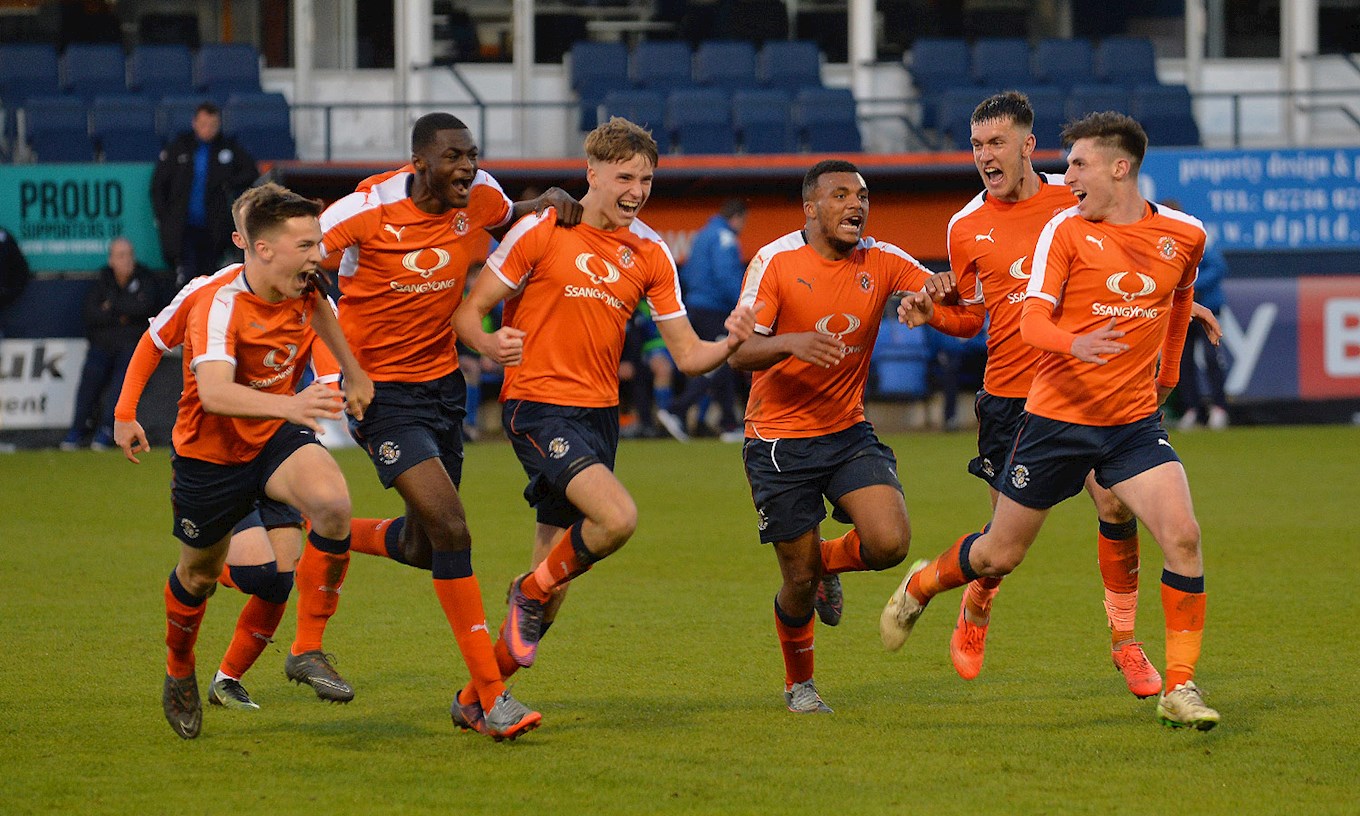 It meant that the Town Under-18s followed in the foot-steps of Paul Driver’s team of 2015-16, featuring James Justin, Frankie Musonda and Akin Famewo, who won this competition at Shrewsbury after also reaching the quarter-final of the FA Youth Cup.

Idiakez’s current crop had failed to perform when they last played under the lights at the Kenny, crashing out of that competition before Christmas with a poor performance against Stevenage.

They were determined to put that right this time and pressed high from the off, with Scott Belgrove charging down a clearance from Latics keeper Jordan Perrin in the second minute, but the ricochet took him too wide to get a shot in.

They enjoyed plenty of possession without creating any clear-cut goalscoring opportunities, and Jones had to be alert to produce a perfectly timed sliding challenge in the area on Charlie Jolley as the Wigan striker prepared to pull the trigger, latching onto a through ball from Joe Gelhardt in the 18th minute.

Within seconds, the Hatters broke at lightning speed down the right with Jack James racing onto the loose ball as Read was brought down in full flight midway inside his own half.

The Republic of Ireland U18 international looked to find Michael Shamalo, but Wigan defender Tom Hilton intercepted, diverting the ball into Scott Belgrove’s path. Latics keeper Perrin was off his line quickly to smother as the Town forward got his shot away.

Visiting midfielder Will McGuffie, who had brough Read down, was soon into referee Ryan Dix’s notepad for another foul on Josh Neufville – although the Town winger had possession of the ball and a great advantage, driving through the middle, when the whistle went.

Read was soon cutting in from the right and floating a cross just past the far post, before Jolley’s pace took him away from Mead at the other end, with the Wigan striker calling Parker into action with a low shot drilled towards the near post.

Jones was impressing both at the back and when bringing the ball forward, especially in the 38th minute when he won a challenge on halfway and set James away down the right, with Belgrove getting on the end of a low cross only to see his shot blocked.

Jake Peck had the last effort of the first half, but his 25-yard half-volley flew high over the bar into the empty seats at the Kenilworth Road End, and it remained goalless at the break.

Town came out of the traps quicker after the interval, however, with Belgrove leading the charge using his pace and power to test the Wigan defence. He had already been on one surge through the middle when he tricked his way into the penalty area in the 52nd minute and went down under challenge from Hilton.

Read’s saw his penalty saved by Perrin, but the Town were well on top and Shamalo was soon rattling the woodwork with a header from Neufville’s right-wing cross.

Drew Richardson sent a 56th-minute header wide from a Corey Panter delivery, but the Hatters didn’t have to wait long for the lead – and it was a deserved one for the way they had started the second half.

Read took a right-wing corner short, then fired in a bullet cross when the ball went back to him, Jones meeting it with a thumping header that gave Perrin no chance at all as it arrowed into the top corner.

Six minutes later it was almost two when Belgrove set Shamalo racing away again in the inside left channel.

This time Wigan right-back Tylor Golden got back to produce a terrific block as the Town man checked back onto his left foot eight yards out, the ball deflecting over for a corner that the striker met with a glancing header that drifted just wide.

The Hatters were bossing proceedings by this stage, and after a spell of possession in the 72nd minute gave James the chance to whip in a cross that Shamalo volleyed back into the danger area

Parker had to be alert a minute later to not only keep out, but hold on to a powerful shot from visiting captain Joe Downey, then – seconds after Connor Tomlinson had been introduced for Richardson – Perrin was at full stretch at the other end to push a Neufville shot away.

James was impressing down the right and Neufville’s skill gave the full-back another chance to fire an angled cross-shot that Perrin did well once again to gather.

Wigan had the ball in the Town net in the 81st minute, but substitute Mwiya Mulumo was flagged offside, then Gelhardt fired high over the bar with three minutes to go as the Latics youngsters tried to find a way back into the game.

They came even closer in the 89th minute as Parker could only punch a right-wing cross clear as far as Gelhardt on the edge of the box, but captain Mead got back to head the striker’s shot off the line and preserve his team’s advantage before lifting the cup aloft a few moments later to the cheers of a sizeable crowd who have had plenty to celebrate in the past fortnight.