Hatters manager Nathan Jones says the welcome he and his team received from the 7,500 Town fans at Newcastle for Saturday’s FA Cup third round tie left him so proud he was welling up!

The Welshman couldn’t hide how he felt, with the club taking the biggest-ever following to the modern St James’ Park, when he spoke to the media at The Brache this lunchtime – just under 48 hours on from the 3-1 defeat to the Premier League side.

“The overriding thing for me is that I’m immensely proud of my football club,” said the Welshman. “For how we conducted ourselves, for how we went about our business on Saturday and the lead up to it. It was wonderful.

“To take 7,500 fans away and for them to conduct themselves in the way that they did, and the sea of orange that travelled up and was around the city and in the stadium, made me immensely proud.

“Coming off the bus, I really had goosebumps and I was welling up, because the pride I had was unbelievable. And to hear them sing and get behind us, even though we went 3-0 down, was phenomenal. I thank them for that.

“There is a tinge of disappointment because we had a nine-minute period where we let ourselves down. We could do nothing about the second goal because it took that many ricochets and that many things, that is part and parcel.

“We made two fundamental errors for the first and third goals, which really set us back, but then we showed just the most immense character not to go under, not to buckle, at a Premier League club.

“We went out and went even more positive against them. We pressed them high, we did all the good things – we got a goal, then we got a perfectly good goal again which would have made the tie far more interesting. But we didn’t let that affect us and kept going and kept going.

“It was a real good end-to-end game, we could have nicked one late on with Gambo – and we’ve hit the bar. We’ve actually gone there and had a Premier League game against a Premier League side.

“I was immensely proud of them because apart from a nine-minute period, it was a real, real good game and a wonderful experience. I was beaming with pride, I really was. That’s my overriding emotion.” 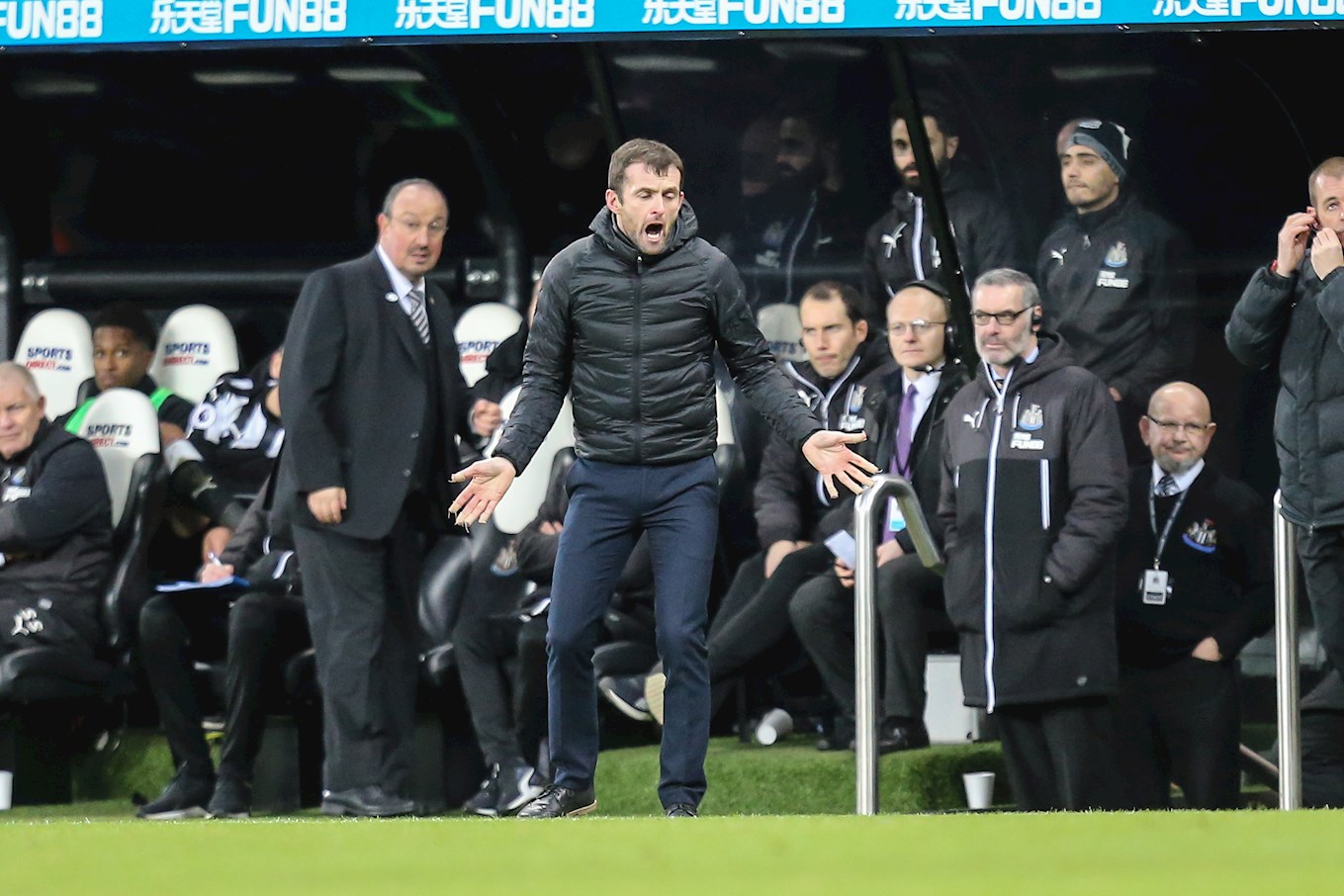 The 44-year-old Town boss also revealed how he spent time with his Magpies counterpart, former Liverpool, Inter Milan and Napoli boss Rafa Benitez, before and after the game.

“We had a wonderful chat and it was great humility from Rafa,” said Jones. “He made a beeline for me before the game, which was a nice gesture, because he hasn’t got to do that – he’s a Champions League winner with years and years of experience, and I’m two years in.

I spoke to him and his staff after and got a real good insight about what they thought about us. They paid us massive respect. They pressed us high and played a full-strength side, because they knew that we are a good side.

“It’s an ultimate compliment if someone like Rafa says ‘Look, we knew you could cause us massive problems, so that’s why we did it’.”

Saturday marked two years since Jones was appointed as John Still’s successor at Kenilworth Road, and he says it took him until yesterday, as he reflected on the Newcastle game, to realise how far the Hatters have come in his time at the helm.

“When I put things into perspective, the first game was against Cambridge and if someone had said to me ‘In two years’ time, you’ll be top of the league, you’ll be playing a brand of football like you are, you’ll be scoring goals and you’ll be playing Newcastle and giving them one hell of a game’, I’d have taken that.

“If someone would have told us you’ll be taking 7,500 fans with you – what a progression we’ve made as a club!

“That’s the pride thing really, and it took me a time on Saturday and Sunday to pinch myself and think that, because I was so het up on winning the game, thinking we can win this, we can win this, because of how we do our work and the belief, that sometimes I forget that. It was a good day.”

Tomorrow, Jones leads the Hatters with another Cambridgeshire side, League One Peterborough United, as they look to move a step closer to Wembley in the Checkatrade Trophy.

Some players who haven’t featured much recently will be given an opportunity for game time, while Kavan Cotter – who scored in the second round win over West Ham U21s – could feature after returning from his youth loan at Hitchin Town.

“We’ll use the squad because some of the squad need games, and we’ll make sure that we’re right at it energetically, so we are going to need to make a couple of changes anyway,” said Jones. “But we are going to have to be strong because Peterborough are a very good side, in great form themselves.

“They’ve had a fantastic win at the weekend and they’ll be strong, because in every Checkatrade game so far they’ve played their first team. They haven’t changed from Saturday, so we’ll just treat it with the respect that we normally do.”