We are delighted to confirm that Luton Town manager Nathan Jones has signed a new four-year contract to secure his future at Kenilworth Road.

The 44-year-old, whose current deal was set to run until 2020, celebrates his second anniversary at the Town helm on Saturday when he takes his table-topping team to St James’ Park to face Premier League club Newcastle United in the third round of the Emirates FA Cup.

After putting pen to paper on his new contract this morning at The Brache training ground, the Welshman said: “I’m proud to extend my deal here and sign a new contract. I’ve never made any secret of the fact I love my job here. We are building something and I’m delighted to rubberstamp the fact that I want to be here.

“It’s a wonderful club and from day one since I came in, everyone has welcomed me and supported me. The fans have got right behind me. We’re in a real good place now and I think it just shows that the club want to move forward, and also that I see myself being here,

“Moving into the transfer window, I want to reiterate my commitment to the club because we ask players to do it when they are coming in, or players that are already here. If they see that the manager is committed to the cause, then it’s easier for them to buy in.

“I’ve got a great relationship here with the board, and especially Gary Sweet. They have made myself and my girlfriend very welcome and I’m delighted to commit my future.

“We are in a good place in terms of league position and points, but the squad we have – the average age and the ones under contract – along with my staff, who work so hard, is quality. It was an easy decision for me.” 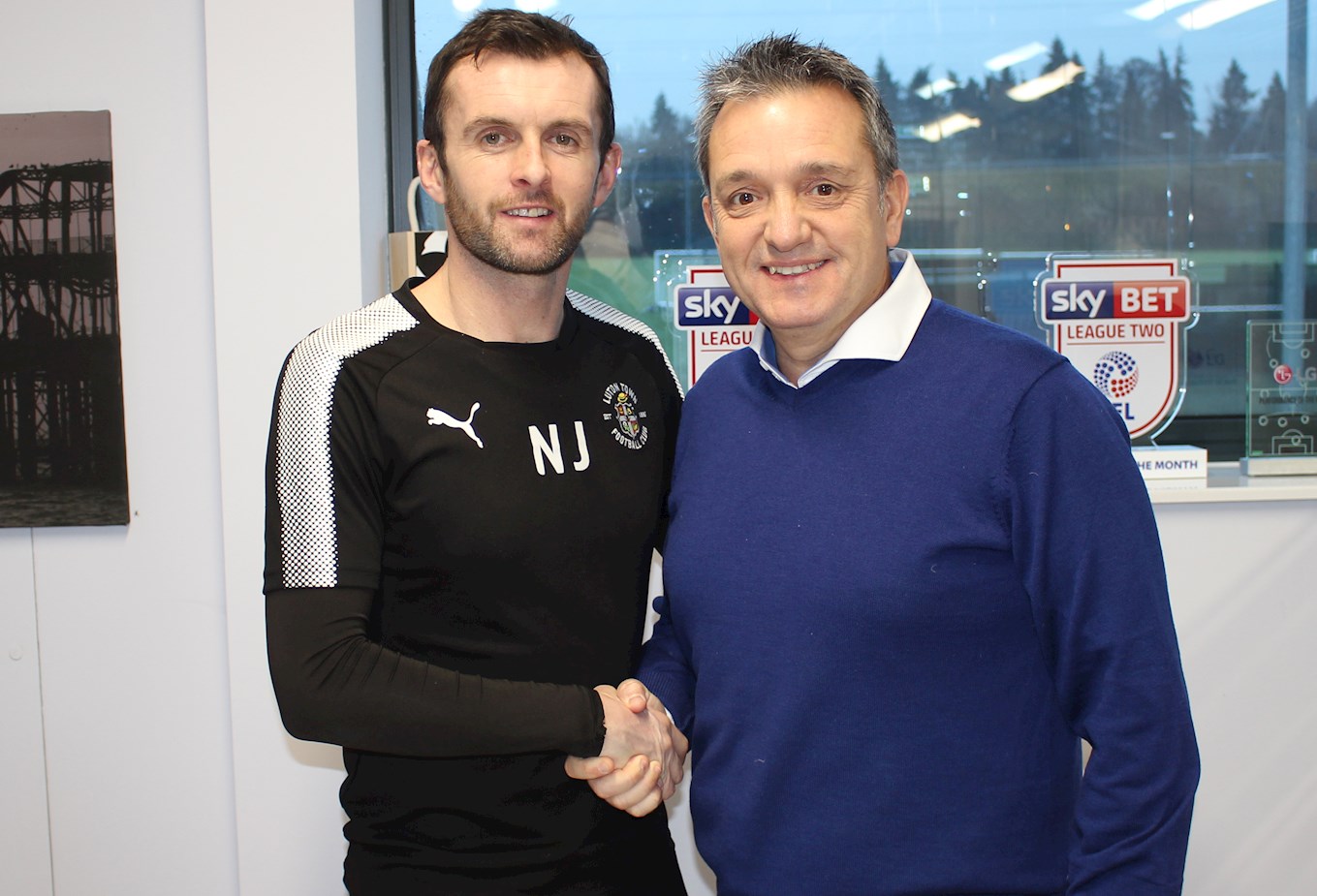 Town chief executive Gary Sweet added: “We are delighted to be able to extend Nathan’s contract for the second time to remain as Luton Town manager for the foreseeable future.

“From the moment he walked into Kenilworth Road almost two years ago we have all seen the transformation of our playing style and improvement in our squad, and we are all enjoying being a Hatter right now.

“Together with our coaching staff, he has put us in a fantastic position at the top of League Two and we have a massive game to look forward to on Saturday at Newcastle with 7,500 Luton supporters proud to follow their team.

“Nathan’s decision to commit to us is a testament to how far we’ve come recently as a club and, more importantly, where we are heading. On behalf of the board, we thank Nathan for the progress he has given us and look forward to many years of success under his leadership.”

Jones left his role as first-team coach at Brighton & Hove Albion to join the Town on 6th January 2016 and embark on his first managerial post. After his first game in charge a fortnight later, the club sat 18th in Sky Bet League Two following a goalless draw with Cambridge.

The former Brighton and Yeovil full-back steered his side to a fourth-place finish last season, losing in the play-off semi-finals, before leading them to the summit of the fourth tier in mid-November of the current campaign.

Today they are four points clear of second-placed Notts County, with an 11-point gap over the play-off places, as he strives to lead the club into League One while playing a brand of football that is earning plaudits throughout the country as his side have set a series of club and national records this season.

That started with an 8-2 win over Yeovil being the club’s record opening day victory, with the Hatters the first English club to hit eight on the season’s first day since Wolves in 1982.

Subsequent 7-1 and 7-0 victories over Stevenage and Cambridge meant the Town became the first EFL side ever to hit seven or more goals on three occasions before Christmas, while the 5-0 win at Swindon on Boxing Day equalled a club record away victory while creating new ones for both the longest sequence of away EFL games without defeat (11) and all competitions on the road (13).

Among those 93 league games, Jones has overseen 47 wins and 26 draws, with his team scoring 157 times – 62 of them this season as the highest scorers in the EFL and second only to Premier League leaders Manchester City in English football – while conceding only 91.

In total, he has presided over 114 matches in all competitions, winning 59, drawing 29 and losing just 26.

In the current campaign he has picked up successive Sky Bet League Two manager of the month awards for October and November, as well as two LG Performance of the Week accolades from the League Managers’ Association.