Supporters are invited to join Luton Town legend Mick Harford at the club shop in the Mall tomorrow (Thursday, 22nd February), when the EFL bring the Carabao Cup to Luton as part of the trophy's tour of the country visiting past winners of the competition ahead of the final on Sunday. Due to a change in their morning schedule, the EFL now expect that the silverware will arrive at the club shop at 3pm (not 2pm as previously stated) and Big Mick - a hero of that famous day when the Hatters beat Arsenal at Wembley 30 years ago - will be reliving it with Chris Kamara and Darren Farley as detailed in the EFL's press release below... 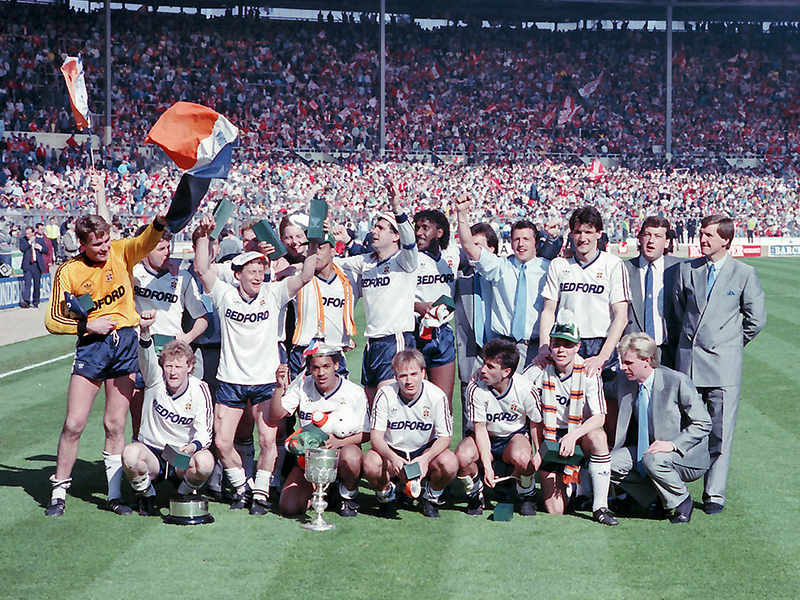 Former footballer turned pundit Chris Kamara and football impressionist Darren Farley are on an epic seven-day road trip to visit the 23 Clubs that have won the League Cup ahead of the competition’s 2018 Final.

The pair will be taking the famous three handled trophy on a nationwide relay covering over 1,000 miles as they celebrate the history of the League Cup.  On the way they’ll meet and share stories with legends from each winning side, culminating in a trip to Wembley Stadium on Sunday 25 February to deliver the Trophy moments before kick-off ahead of the Final between Arsenal v Manchester City.

Along the way, famous players who have written the League Cup’s colourful history, will be sharing memories of their famous victories including Manchester City’s Dennis Tueart who scored a stunning overhead kick in the Club’s 1976 win against Newcastle United and Paul Merson who played a pivotal role in Arsenal’s last League Cup victory in 1993.

The Trophy Relay will include stops at famous grounds and cities, including Liverpool’s Anfield, with the Club having enjoyed eight memorable League Cup victories. Kamara and Farley will also be popping into players’ houses, Club shops and will even take in special visits to iconic locations including Gladstone pottery museum in Stoke and the Birmingham Canal, where players from all of the winning West Midlands Clubs will board a boat with the Carabao Cup and go on a trip down memory lane.

Chris Kamara said: “The League Cup is a competition rich with history, over the past 50+ years there have been so many memorable finals with 23 different Clubs lifting the Trophy, from Liverpool to Luton. I’m really looking forward to getting out onto the road with Darren and meeting players from each of the winning sides from the late 1960’s all the way through to the present day. It will also be great to meet fans old and young who have enjoyed their team’s success at Wembley.”

Darren Farley said: “I’m excited to hit the road and visit all the Clubs that have won the League Cup. I’m sure Kammy and I are going to have a lot of fun whilst exploring the country and chatting to players who have been fortunate enough to win the Trophy.  As a Liverpool fan I’m proud to say we’ve won the League Cup a record eight times, so I’ve certainly got fond memories of winning at Wembley – the Anfield of the South!”