The following interview with Hans Menasse, a former Austrian international, was written by former Hatters Press Officer Andrew Barringer for the matchday programme following the Town's last promotion in 2014. We are revisiting the fascinating piece on www.lutontown.co.uk because tomorrow, the 88-year-old former Town youth player and Hatters fan will attend a game at Kenilworth Road for the first time since returning to Vienna aged 17, as a guest of the club, to enjoy the celebrations against Forest Green...

When Luton Town were crowned champions last season (2013-14), a former Austrian international striker with a link to Kenilworth Road was one of the first people to send his congratulations. Talk of the Town travelled to Vienna in the summer to hear Hans Menasse’s fascinating story. 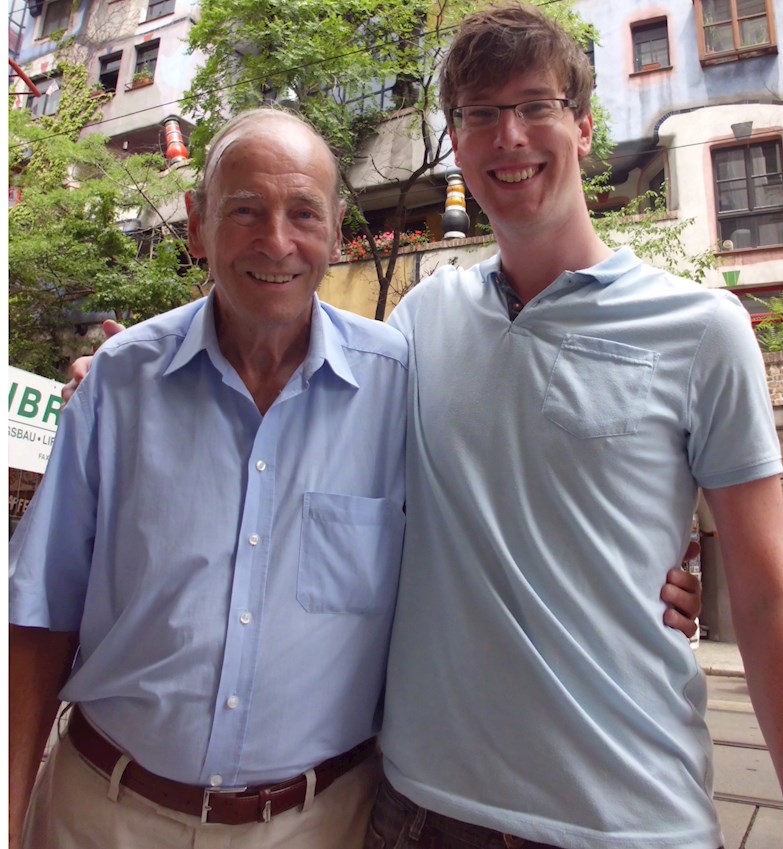 The ambience of the café in a bustling Viennese street was typically Austrian; the sideshow of begrudging service played second fiddle to the sweet scent of cakes and coffee that filled the room.

And on this unusual occasion, the locals’ summer air would have an altogether different sound, as two men talked fluently in English about football and, poignantly so, war.

Hans Menasse is 84. He, along with his brother Kurt, was one of nearly 10,000 children from predominately Jewish families from Austria, Germany, Poland and Czechoslovakia that were placed into English foster homes as part of the Kindertransport rescue mission that took place nine months prior to the outbreak of the Second World War.

His association with Luton Town and the story of his journey from Vienna to Bedfordshire, England, as an eight-year-old came to light at Kenilworth Road just days after the Hatters had lifted the Conference trophy when he sent the Luton Town’s top brass a congratulatory email.

For Hans, the link with Luton first began in September 1938. As part of the Kindertransport operation, Hans and his brother were shipped across the English Channel to Harwich but, after the pair were split following Hans’ short bout of scarlet fever, Hans moved to Chiltern Road in Dunstable where he would live with the Cooks, his English Foster family.

Hans had already kicked a football around the streets of Vienna in his youth, and with English boys’ staunch love of the game just as strong, he was soon playing regularly for the Pioneer Boys’ Club in Dunstable.

“Menasse played his usual good game and scored three goals,” one local newspaper printed rather modestly in its sports section, which detailed reports and results from the youth fixtures from around Bedfordshire. 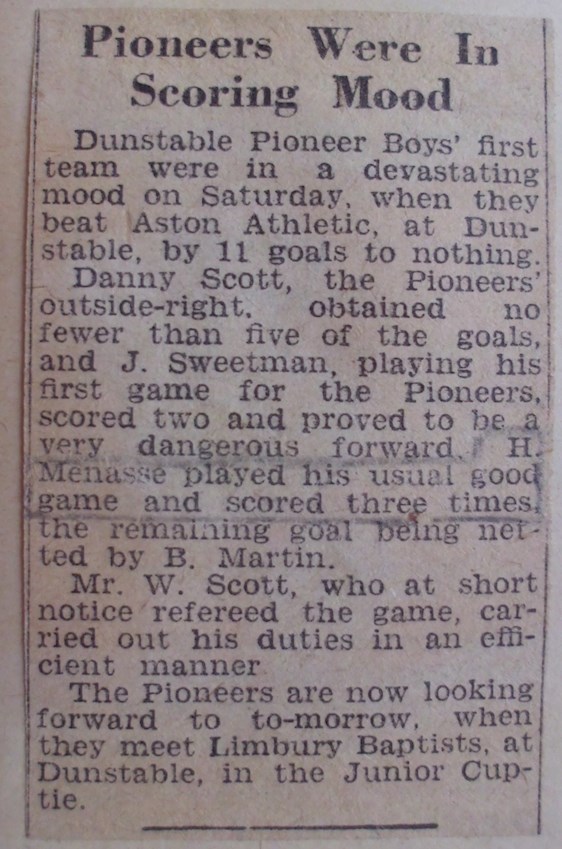 The headlines from the newspaper clipping that Hans had kept, and treasured, spoke for themselves, and soon the Austrian boy’s exploits for the Pioneers were making more headlines. And that’s what led to four matches for the Luton Town Colts as a 16-year-old – the equivalent of the modern day youth team.

“I don’t remember the games, only the fact that I didn’t play very well,” explained Hans as he continued to sift through his cherished clippings. “I didn’t score and it was a rather unusual experience.

“We were told to turn up at 2.30pm at the main ground and we’d be off somewhere to play. I didn’t know any of the other players and they didn’t know each other either.

“Everyone plays badly every now and then but all I can remember was that I didn’t play well and that we didn’t win.

“It was tough to make an impression but I had no regrets.” 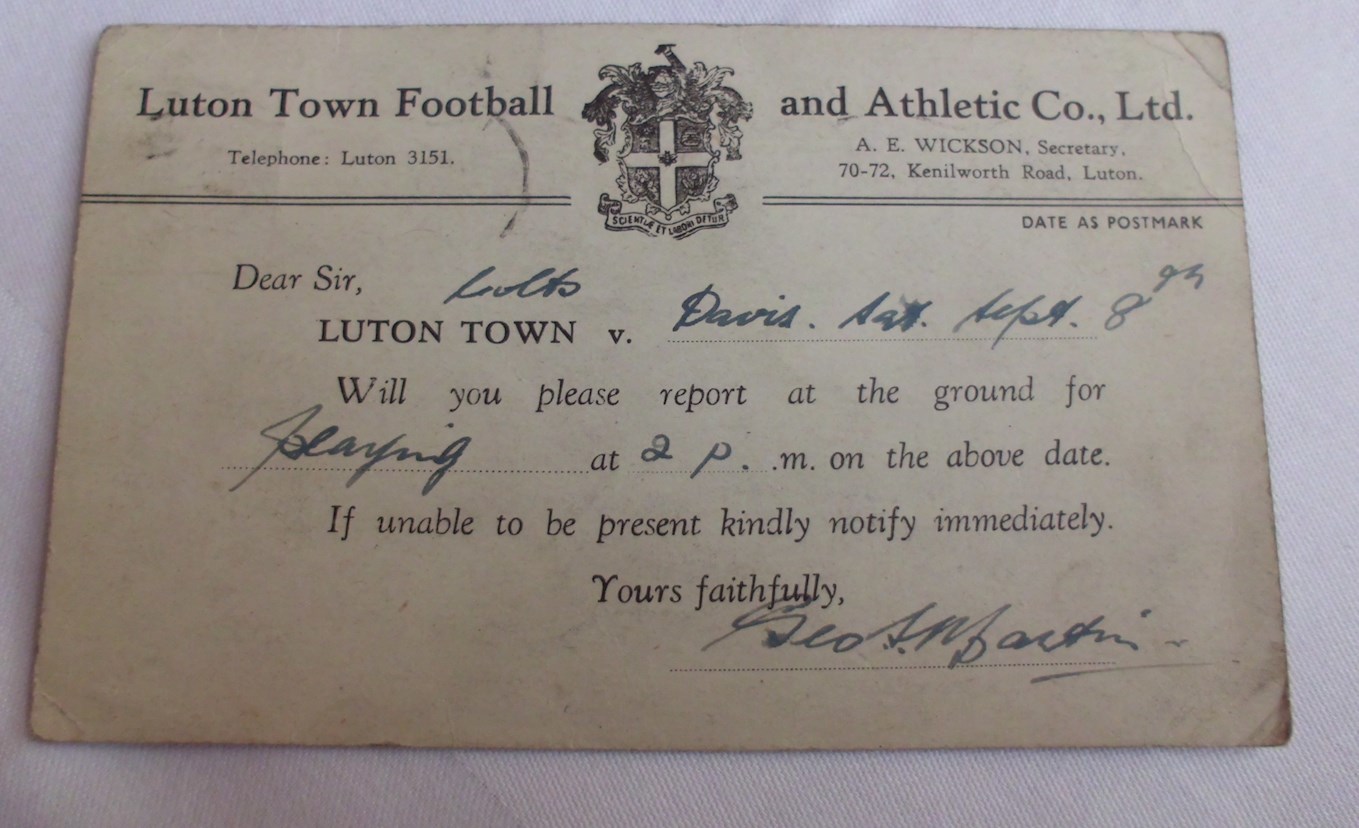 The young Menasse might have thought he hadn’t made much of an impact, but the Luton manager at the time, George Martin, certainly believed he had seen a player with star quality.

Martin, who was in charge at Kenilworth Road between 1944 and 1947, wrote to Hans in a letter. It contained glowing reference.

It read: “I’m sorry you are leaving, as you showed great promise and were one of the few players that showed great football intelligence. If you ever come back just ask the doorman that George Martin sent you.” 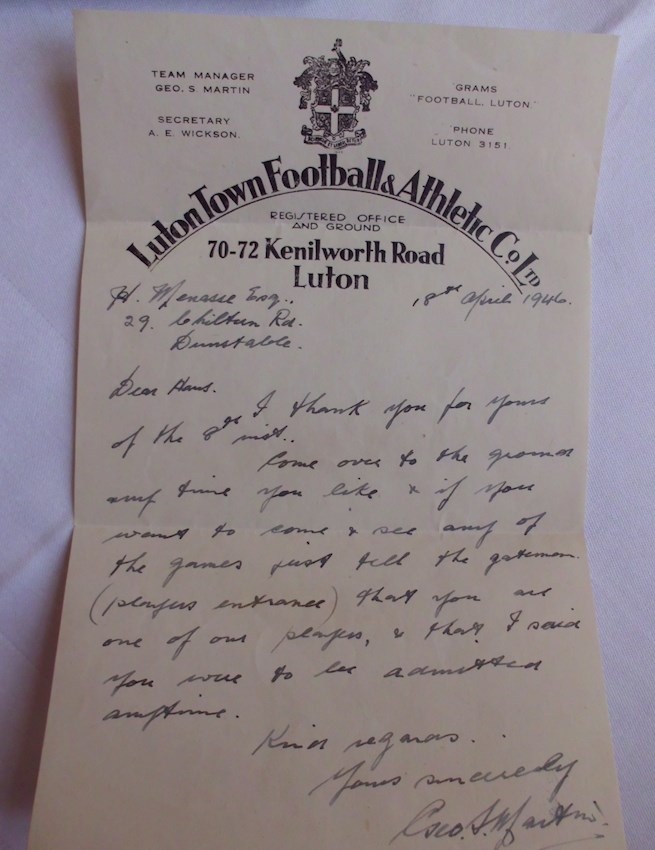 However, in those days young players from overseas were never allowed to be taken on by professional clubs - but Hans, despite his own self-depreciation of his performances in Luton colours, was still impressing enough to warrant trials with Derby and Arsenal.

Meanwhile, he remained in Dunstable and continued to play for the Colts. All of a sudden he vividly recalled the time Luton beat Newcastle United in an epic encounter in front of 25,000 at Kenilworth Road in September 1946.

“I went to see Luton several times,” Hans remembers. “In one game Luton trailed 3-0 but won 4-3, it was an amazing match. I remember a prolific striker named Hugh Billington, and whenever I came to watch Luton he seemed to score.”

Our attentions turned to Menasse’s return to Austria, a time when he came back to the Viennese playgrounds as a 17-year-old, and where his football career would go on to flourish.

But before going on to enjoy the stardom of professional football came the time to return home, where - thankfully - his parents remained.

“My parents could have been killed,” says Hans. “When I left it was like an adventure.

“When I returned home my parents were both alive, thank god, but life was much different.

“My sister had died of pneumonia aged 21 in Canada and my parents would never talk about the effects the war had on our family. My father was Jewish, but my mother was Catholic. The Nazis would ask my mother to divorce my father – if they had done he would have been sent immediately to a concentration camp. It was a terrible, unimaginable time, especially for my parents.

“Vienna was a tough place to live. My brother joined the British Army and the first time he saw my parents he arrived dressed in British Army Uniform. He helped them with food – cans of meat, coffee, sugar – and anything to help because it was difficult in Vienna to get those kinds of things.”

Football was Hans’ release – it was what he knew. But first he had to learn to speak his mother tongue again.

“I returned to Vienna and couldn’t speak a word of German!” laughs Hans. “I came back and I had no idea how good at football I was, I just played. Nobody knew how I was playing in England but within three years, and at the age of 20, I was in the First Vienna starting XI.

“I came through the youth ranks and the game was so different to in England. Every match I saw in England it was all kick and rush – playing the long ball to a big centre-forward. That style of play never suited me, but in Austria it was different.

“In Vienna the style was so-called Wiener Schule, it was football played on the ground with a passing game that suited me much better.”

Enjoying his football with First Vienna – who he helped win the Austrian league title in 1955 – Hans' performances alerted the attentions of the national team. Menasse had forged a reputation as a fleet-footed outside-right and the first of two caps for Austria came in 1953 – against none other than the then-mighty Hungary, who included in their team Ferenc Puskas, arguably the greatest player of his generation. 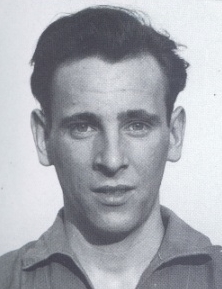 “I only placed twice for Austria, unfortunately,” says Hans, melancholically. “Before the World Cup of 1954 I fell ill.

“We once played Hungary in a friendly and lost 5-3. That was 60 years ago but it was reported that Puskas said I was the best player on the pitch!”

Hans returned to England whilst still a player with First Vienna, playing against Sunderland, Burnley and Wolves – at which point he was likened to a certain Stanley Matthews.

“In the friendly at Wolves I was playing on the right wing. I was quite fast and liked to dribble past players and I remember one of their supporters shouting ‘he plays like Stanley Matthews!’ It was a big compliment.”

Matthews went on to play until his 50s. That wasn’t quite the age in which Hans ended his career, but it was one which included a spell with Austria Vienna, where he would go on and become a director for the best part of a decade.

Those halcyon football days are times you can tell Hans still dreams and longs to be a part of. With his bright blue eyes, sharp footballers’ wit and spring in his step, you could almost imagine the octogenarian running rings round League 2 defences if he got half a chance.

Instead, Hans settles for a seat in front of his computer and the opportunity to reconnect with the world; on and off the pitch – at home and at Kenilworth Road.

And, one day, when he switched on his shiny new computer, he was aghast. Luton were no longer the top-flight club that he had left behind for Vienna in the mid-1940s.

“When I left Luton they were one of the top clubs in England,” says Menasse. “All of a sudden I turned on the computer and I realised they were in the fifth league.”

The exclaimed look of astonishment was probably one all Luton supporters shared back in 2008. “What happened?” questioned Hans. Well that is a story for another day…

But, comfortingly and unbeknownst to us, Hans followed the fortunes of the Hatters over the past four seasons.

“Points deductions and losing in the Play-Offs twice, beating Norwich in the cup,” reeled off Hans, enthusiastically, impressively.

“I thought they were never going to get up, but when I saw that they were promoted last season I just had to get in contact to offer my congratulations. I told the club that I was probably the only supporter of Luton Town on the continent but was told there are supporters in Italy and Scandinavia.

“I eagerly await the results every week.”

Menasse admits that he does want to return to Kenilworth Road one day – he did a bad job of secretly admitting he hopes the team secure another promotion this season and use it as an excuse to make it over to England for any celebrations.

And if he does, you’ll be sure he’ll be clutching that letter from George Martin – and don’t be surprised if he brings his boots either.

*That promotion may have happened three years later than Hans had hoped, but everyone at Kenilworth Road is delighted to be able to give him a celebration to return for. Have a great day Hans!