The Hatters moved to the top of Sky Bet League Two tonight with a fantastic 4-1 victory at fellow promotion chasers Exeter City.

Nathan Jones’ men made it eight games unbeaten, including seven wins, with a thrilling second-half display in Devon after James Collins’ first-half opener had been cancelled out by Jake Taylor.

Dan Potts marked his return from suspension with his second goal of the season just after half-time, before Danny Hylton netted his eighth and Harry Cornick bagged his first for the club as the Town made it four wins in a row – a run in which they have netted 16 times!

The victory took the Town above the Grecians, who were one place above them at kick-off, and leaders Notts County, who lost 2-0 at Crewe.

Jones made two changes to his starting line-up, with Alan Sheehan, who missed the 7-1 win over Stevenage on Saturday due to the birth of his first child, and Potts both returning to the Town back four.

The hosts came out of the blocks at lightning pace, former Hatters loanee Jayden Stockley rattling the woodwork with just ten seconds on the clock, Marek Stech saving the follow-up from Reuben Reid.

Taylor cut in from the left and fired a right-footed effort just wide of Stech’s right-hand post in the sixth minute, but the Hatters were in front with their first attack of note two minutes later.

Cornick did brilliantly to get to the right byline and cut the ball back for Collins, who was waiting inside the six-yard box to steer in his eighth goal of the season.

The Town looked to increase the lead a minute later when Sheehan sent in a free-kick that Potts met, but couldn’t keep his header down.

Exeter almost hit back in the 12th minute when Dean Moxey headed wide at the near post, before Lee Holmes hammered an effort over from the edge of the box.

Hylton had the Town’s next chance in the 20th minute when he picked a loose ball up on the right edge of the area and cut inside to unleash a left footed shot that Christy Pym turned away, but a minute later the Grecians were level.

Stockley rose to flick a long ball forward on, and left-winger Taylor pounced to bend a right-footed shot beyond Stech and into the top corner.

The Hatters survived another scare in the 28th minute when Troy Brown rose at the far post and headed back across goal, but neither Reid not Jordan Tillson could turn the ball home and Glen Rea hooked clear from almost on the line.

Taylor went close again on the half-hour with a 25-yard drive that flew just over Stech’s crossbar, before Jones switched formation to drop Rea into the heart of defence as part of a 3-5-2 system.

It enabled the Hatters to get more of a solid look about them, and going forward they looked a real threat, Jack Stacey – on his return to the club where he spent last season on loan – bursting into the box but finding his path blocked by a stumbling Craig Woodman.

Referee James Linington said no penalty, but Hylton was soon having another go, Olly Lee and Potts combining to play the striker in on the left, but his right-footed effort as he drifted across the edge of the 18-yard line flew just over the bar into the home fans.

The Town were playing much better, and after Troy Brown went into the book for a 38th minute foul on Luke Berry out on the Town left, Sheehan whipped in a free-kick that Potts met, but couldn’t keep his header down.

In the 42nd minute Collins flicked on for Cornick, whose shot on the turn was saved low by Pym, then Stockley should have done better when Holmes put a terrific ball in from the right in the 43rd minute, but the striker’s header from five yards out was off target.

As half-time approached, Olly Lee hit a stunning 35-yarder that Pym pushed away, then Potts met Sheehan’s corner with a towering header, but referee Linington saw an infringement and Exeter survived.

Rea soon became the first Town player to receive a yellow card for kicking the ball away, and Grecians right-back Pierce Sweeney volleyed inches wide from the resulting free-kick, but it remained all-square at the break.

It only stayed that way for just over a minute of the second half, as the Town regained the advantage. Exeter thought they had cleared a Sheehan corner, but first Olly Lee and then Cuthbert headed back in to the box, and as everyone waited for a penalty as Hylton appeared to be pulled to the ground, Potts lashed in from ten yards to make it 2-1.

It was almost three in the 49th minute when Rea volleyed Sheehan’s cross goalwards, but Exeter managed to block. Their respite was brief.

A superb 52nd-minute move down the right saw Cornick cut the ball back for Hylton, who bided his time, checked back on his left foot and rifled into the roof of the net for his seventh goal in his last six games.

Three minutes later it was 4-1, and finally Cornick had the goal his recent performances have deserved, as Hylton and Collins combined brilliantly down the left for the latter to cross for the former Bournemouth man to head home.

The Town were rampant, and Hylton tried his luck again just after the hour, his shot from distance flying inches over the bar, before Saturday’s hat-trick man Berry drove at the Grecians’ defence and fired in a low shot that Pym got down well to save.

At the other end Cuthbert showed a clean pair of heels to outpace Liam McAlinden when the Exeter substitute looked to race clear on the right, then Rea made a great block from a Taylor shot and Stech was his usual solid self, coming to punch clear to relieve any danger.

Hylton, moments after driving down the left after a great turn in his own half from Collins, was sniffing again in the 71st minute when Berry nutmegged his man during a flowing move, before playing the striker into the area.

Hyton engineered space for himself to unleash another left-footed shot, but this time Pym was right behind it.

Sheehan picked out Potts with another pinpoint cross in the 78th minute, but Exeter managed to steer the ball away as Rea looked to get his head on it.

Jones brought James Justin on for Cornick, who left the pitch to a standing ovation from the 353 travelling Town fans, and the homegrown right-back was soon into the thick of the action, bravely heading clear on the edge of his own box and winning a free-kick to ease any kind of danger.

Stockley and McAlinden threatened briefly, but neither could find a way past Stech who saved both late efforts comfortably, and the Town moved a point clear at the top of the table ahead of Saturday’s trip to Crawley. 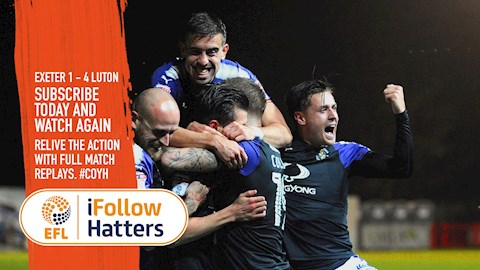