The Hatters travel up to high-flying Accrington Stanley tomorrow as Nathan Jones and his side look to add to their five league match unbeaten run.

Last Saturday’s 3-1 win over Newport County AFC made it four wins from five as the Town begin to close in on the top spots, having also defeated Port Vale, Wycombe Wanderers and Chesterfield in that run.

Accrington have got out of the blocks quickly this season, and sit in third, two places and two points better off after 11 games.
Billy Kee has been Stanley’s top scorer for the past two seasons and it looks as if he is heading the same way this term as he already has seven league goals to his name – putting him joint top of the League Two scoring charts at this early stage.
THE GAFFER SAYS:
On the potential for three points to take us above Accrington: “I don’t think we need any more motivation to go there in terms of that. If we do win the game, then yeah, mathematically we will leapfrog them. That’s fact. We are not looking at that yet. The league table is fledgling. It’s very close and you’ve just got to concentrate on your own form. It was pretty much like that last year and you won’t really see the ones who are really standing out for a while yet, because everybody plays each other, people have a different run of form, people have a different run of games, where they pick up points and some drop them.
“It’s such a long time to go, all we’ve got to concentrate on is us. We are in good form at the minute, we have to continue that – and we have to continue to get better, because that’s the thing; we don’t just want to stand still and say ‘We are in good form now, let’s continue as we are’. There’s lots of stuff I was delighted with in the performance against Newport, but again, without being disrespectful, if we had had a cutting edge about us, then that could have been a lot more. The level of performance we put out, and the amount of times we arrived in their box, in behind their back four, with the opportunity to score goals. If we had taken half of those, it would have been far more emphatic.
“We can improve, and obviously we conceded, which we didn’t want to do. A clean sheet would have been really nice because it meant we could have seen out the game a lot more comfortably, or relatively comfortably.
“There are always things we can improve on because we want to evolve. We don’t just want to stagnate and stand still, we want to keep going.”
On John Coleman: “He always does well there. He does wonderful there to be honest, because he loses players year in, year out, and he’s lost some good players.
“We liked the boy Matty Pearson, who he lost. He was a real top player for this level. Shay McCartan he lost, and any loans he takes, if they do well there, they tend to move on, but he keeps producing teams and players that are very, very competitive at this level.
“Whatever the format is, or the mandate for the club or whatever, he keeps doing that and fair play. And they are a difficult side to play against.
“They know what they are doing. They are organised, they have a little bit of freedom to play, so they are a dangerous side, and they’ve got good individuals."
On there being any concerns having only scored in two away games: “No, not really. We’ve come up against some tough sides – we’ve played Lincoln away and kept a clean sheet. Not many do that, so I’m pleased with that.
“Barnet was the disappointing one, it really was.
“But then we went to Mansfield and Wycombe, who are going to be two top sides in this league, and scored four goals, so no, not really. I think we won’t be far off the highest scorers in the league, so for me to have any concerns I think would be futile.”
WHO?
One of the pacesetters in the division so far, Accrington are certainly one of the teams to beat at this early stage of the Sky Bet League Two season.
It comes as little surprise though, as Stanley were just five points short of a play-off place last season and finished in the top seven the previous year.
One of the smaller clubs in the EFL, that certainly doesn’t reflect in their style or results, as their track record under John Coleman will no doubt see them pushing for a place in League One next year.
Their 1-0 win over Forest Green Rovers last weekend means they have now gone four league games without defeat.
WHEN AND WHERE?
Kick-off is at 3pm on Saturday 7th October at the Wham Stadium.
TICKETS
Tickets for this fixture are no longer available from the LTFC Ticket Office, but will be available to buy on the day at Accrington - subject to availability. Prices for the fixture are as follows:
Adults: £20
Seniors (65+): £15
Student (with photo ID): £15
Under-18s: £15
Under-12s: £5
Ambulant disabled tickets are priced at normal rate with a carer free of charge. Wheelchair disabled tickets should be purchased directly from Accrington on 01254 356950 (Jessica Fish).
Car Parking is available on the above number at £5 per vehicle.
Away fan Hospitality can be booked with Sophie Jones on 01254 356950.
LAST TIME WE PLAYED?
The Hatters took on Accrington for their penultimate game of the 2016-17 season back in April, with Jones’ team running out 4-1 winners. We have played Stanley a total of nine times and have won, drawn and lost three each against them.
FOLLOW THE ACTION
Supporters who aren’t making the journey tomorrow can follow the Hatters’ Twitter feed on @LutonTown, or stay up to date on the LTFC website in the match centre. iFollow Hatters subscribers can tune in for Simon Pitts’ match commentary, whilst international subscribers can watch the game live. ­­ 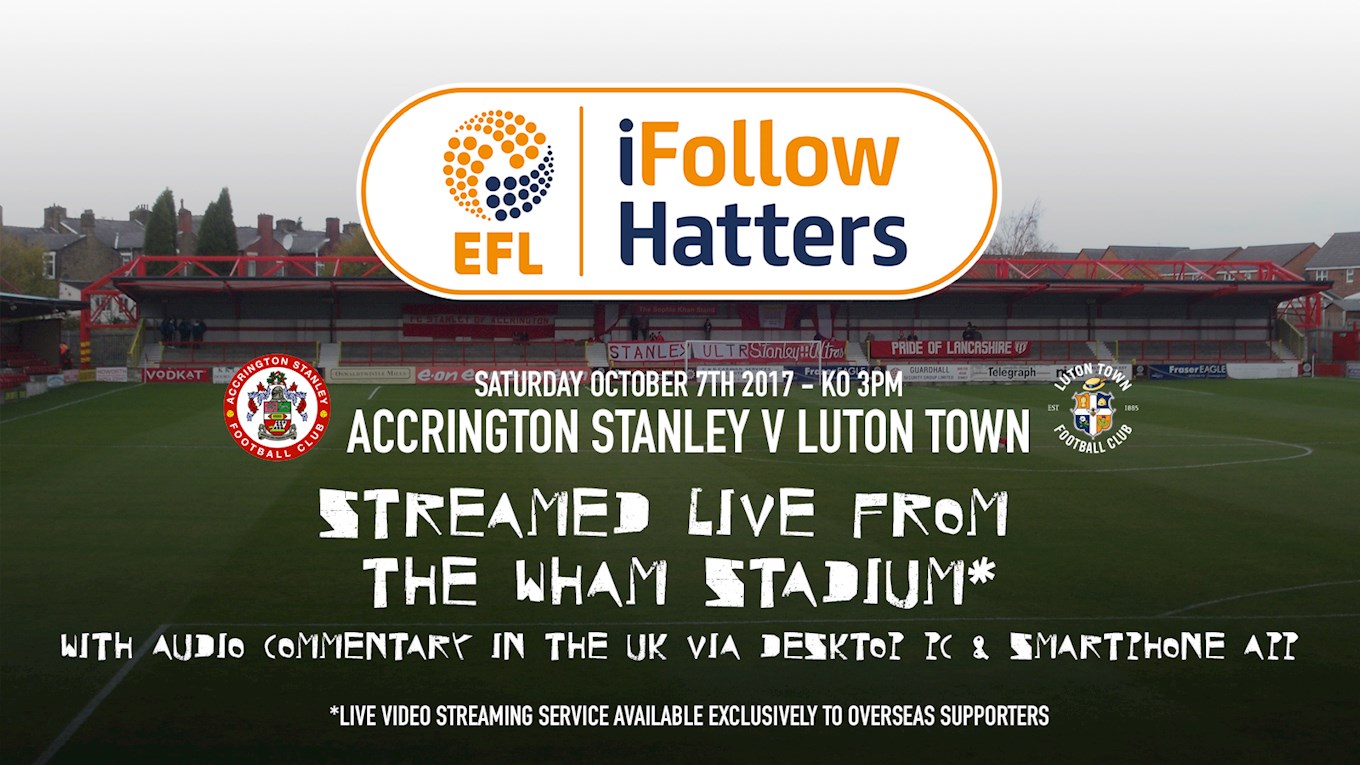