Hatters boss Nathan Jones sat down with press and communications manager Stuart Hammonds after training at The Brache this afternoon to reflect on a summer of terrific transfer activity, top drawer training facilities and the backing of the Town board. 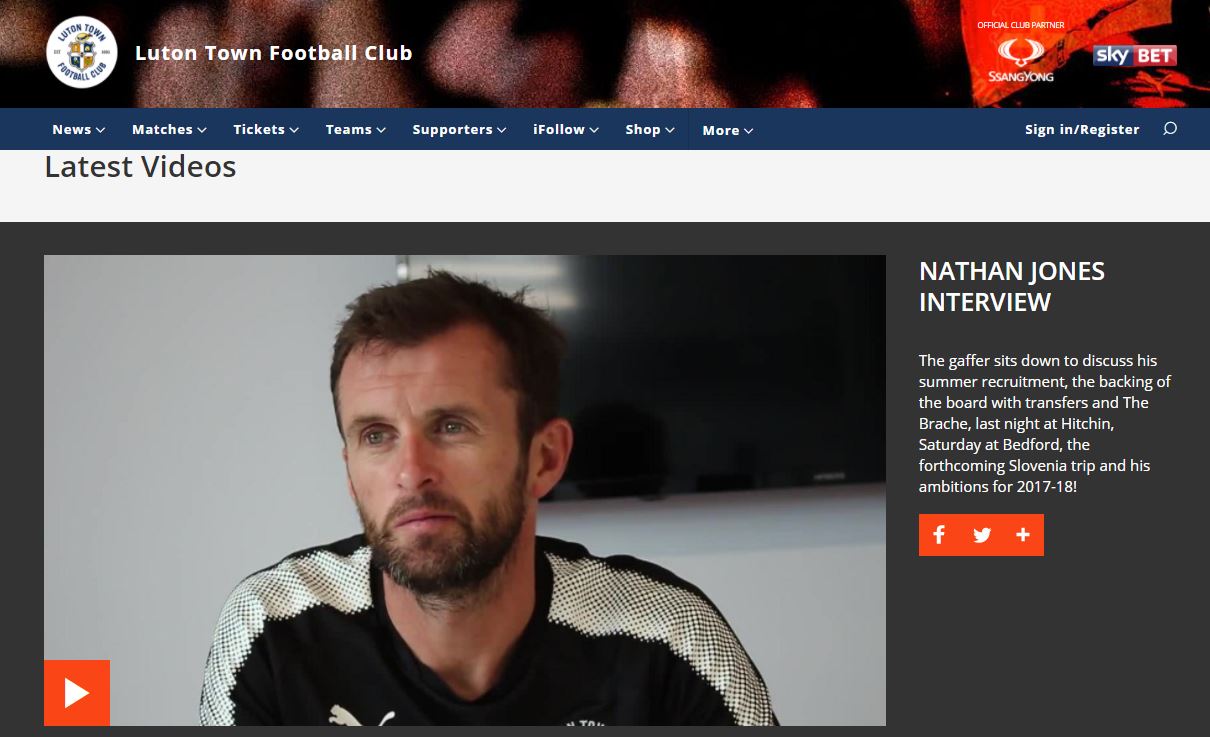 In wide-ranging 20 minute interview that can be accessed on iFOLLOW HATTERS FREEVIEW by clicking here, Nathan gives his views on...

A working holiday: “I spent the majority of it on the phone, but it’s been a good summer in terms of everything that was needed to get certain things from last season out of our system. Now we are back and ready to go.”

The players’ return to training: “They are a great group and they came back flying. The new ones we brought in also were at a real good level, so it’s about holding them back more than anything.”

The sales of Cameron McGeehan and Jack Marriott: “The deals were for the good of the club, not just because it gives us money but it enables us to put it back in, and that’s what the board have done. They’ve put it back into the training ground, into the Brache, into the structure of the football club – and we are stronger for it.”

Alan McCormack: “He’ll bring a real know-how, he’s very mobile, excellent in possession. He’s more of an experienced age, but we felt that was what we lacked a little bit and we’ve tried to add that with the recruitment this year in our squad.”

Marek Stech: “He’s still got plenty of development to go in terms of everything that we do and the work we do here, Marek will improve and get better. We earmarked getting a marquee goalkeeper. I know what type of character he is, what type of goalkeeper he is, and we are hoping to get the best of him.”

Jack Stacey: “I was aware of Jack two years ago when I was at Brighton. He was on my list then as a young player to watch. He did fantastically well at Exeter last year. He provides stellar competition for James Justin and we feel we have two of the best young right-backs around.”

James Collins: “The club showed fantastic desire to get it done and they backed me with that. The boy showed real desire to want to come here as well, which was fantastic. We feel he’s an excellent signing. You can just see from training now that we’ve got a very potent strike force.”

Andrew Shinnie: “Myself and Joaquin Gomez flagged him up at Brighton as something a little bit different to what we had as a number ten there, so to be able to bring him to Luton is wonderful. If Andrew really wants to perform here, then he will because he has wonderful ability. He could prove a fantastic signing.”

James Shea: “James backs himself that he’s going to provide excellent competition for the number one jersey. There is no class or order, whoever plays well, plays. He comes with real good pedigree, has been promoted with AFC Wimbledon and played a lot of games last year in League One, so he fits the bill.”

Elliot Lee: “It goes to show again the ambition of our football club, but also the stature in which it’s held, because we’ve been able to attract that calibre of player. Elliot provides different characteristic to the ones we have here. We’ll have excellent competition up front and there’ll be a decision to make.”

The board’s backing: “The squad is in wonderful, wonderful shape. For this stage of pre-season, I couldn’t be happier and I’d like to thank the board for that, especially Gary Sweet who is my direct link with the board. We have a fantastic relationship and we sat down at the end of the season, after the play-offs, and said ‘Yes, we are all disappointed but how do we get better? How do we go a minimum of one place higher in the league for next season?’ Because the ultimate goal is obviously promotion. They have backed me fantastically. We have stayed within. We haven’t gone gung-ho. But when I’ve needed a decision to be made – and there have been tough ones to be made – they’ve backed me in everything I’ve done, so I can’t ask for any more than that. They’ve been a wonderful board to work for since I’ve come in, and that hasn’t changed right up to now.”

And The Brache: “It’s a wonderful, wonderful facility. The standard of pitches is Premier League. The standard of the 4G, the building we have here, the gym, the equipment we now have, the areas we have to train on…look, they are the highest level. They are as good as what I had at Brighton – and Brighton’s training ground is top five, top six in Britain. It’s that good.”

For the full 20-minute interview and to hear the gaffer’s views on last night’s game at Hitchin, the trip to Bedford Town on Saturday and the forthcoming training week in Slovenia, press play below to watch it on YouTube...