A Nick Powell double and a third from Steven Fletcher made it two successive defeats for the Hatters as Stoke City took the points in the Potteries this afternoon.

Manager Nathan Jones made four changes from the midweek home reversal against Cardiff for his first return to his former club, with James Bree back in the starting XI after picking up an injury against Chelsea in the FA Cup.

After playing an hour midweek, Martin Cranie started at centre-half ahead of Tom Lockyer, who was ruled out through an ankle injury that forced him off against his hometown cliub, and after both starting on the bench in that game, Harry Cornick and Jordan Clark came back in to occupy the wide attacking berths.

George Moncur and Joe Morrell were named among the substitutes, whilst Tom Ince was unavailable for this fixture as he can't play against his parent club.

The ninth-placed hosts started brightly with Nick Powell firing inches over Simon Sluga's bar within 20 seconds of the kick-off, then Jacob Brown was soon the first into referee Robert Jones' notepad for an industrial challenge on Dan Potts.

Town looked solid and composed in the opening quarter-of-an-hour, and their first half-chance came on 18 minutes when Cornick crossed deep from the right and home keeper Angus Gunn seemed to misjudge the flight, but Rea couldn't direct his header on target.

City took the lead in the 20th minute when the Hatters conceded possession on the edge of the Stoke penalty area, and they broke swiftly, with Powell trading passes with Steven Fletcher before side-stepping an unprotected Sluga and virtually walking the ball into an empty net.

The Hatters tried to respond immediately, but Cornick's left-footed shot when Stoke could only head a Dewsbury-Hall free-kick clear to the edge of the box was well wide of Gunn's near post.

Jones soon switched formation, with Rea stepping out of the back three to his more usual holding midfield role.

It was tough going for the Hatters, but it was Rea's quick free-kick that brought a sight of goal for Clark three minutes before half-time, the wideman cutting in from the left and unleashing a shot that looked to be heading towards the top corner until it was blocked by the head of Harry Souttar.

Souttar got his head on a set-piece from Jordan Thompson in the early stages of the second half, after Rea had been booked for a foul on Powell, but Sluga was safely behind the centre-half's effort.

Gunn palmed away a 51st-minute cross from Collins as the Hatters attacked down the left. Rea quickly gathered the ball 25 yards from goal as Stoke struggled to clear, but his shot was always rising, before Mpanzu sliced well wide with his left foot moments later.

Fletcher sent a header wide just before Clark - head bandaged after being caught by Tommy Smith just before the break - took a Dewsbury-Hall pass in his stride, cutting in from the left, and fired in a low 20-yard shot that went just wide of Gunn's right post.

Sluga had to get down low to his left to push away a curling Powell cross before getting his body in line to hold a Joe Allen shot that was straight at him, just before the hour.

Clark had another go from outside the area on 61 minutes, this time straight at Gunn, but within a minute the hosts had doubled their lead when Allen stood a cross up to the far post and Powell rose above Bree to head into the top corner.

Jones made a double switch on 67 minutes, introducing Ryan Tunnicliffe and Morrell into the midfield, with Mpanzu and Bree withdrawn, Rea dropping back into cenytre-half and Cranie moving to right-back.

It was Stoke who added a third goal in the 78th minute however, when a mix-up between Cranie and Rea allowed City sub Sam Clucas to bear down on Sluga and, in carbon copy style to the opening goal, slip Fletcher in to his right to roll the ball into an empty net.

The Croatian keeper pulled off a point-blank save from Stoke sub Sam Vokes' header, before racing off his line to deny another, James McClean, as the hosts threatened to add to their winning margin.

An afternoon to forget for the Hatters, who will look to bounce back on Tuesday night when Millwall visit Kenilworth Road. 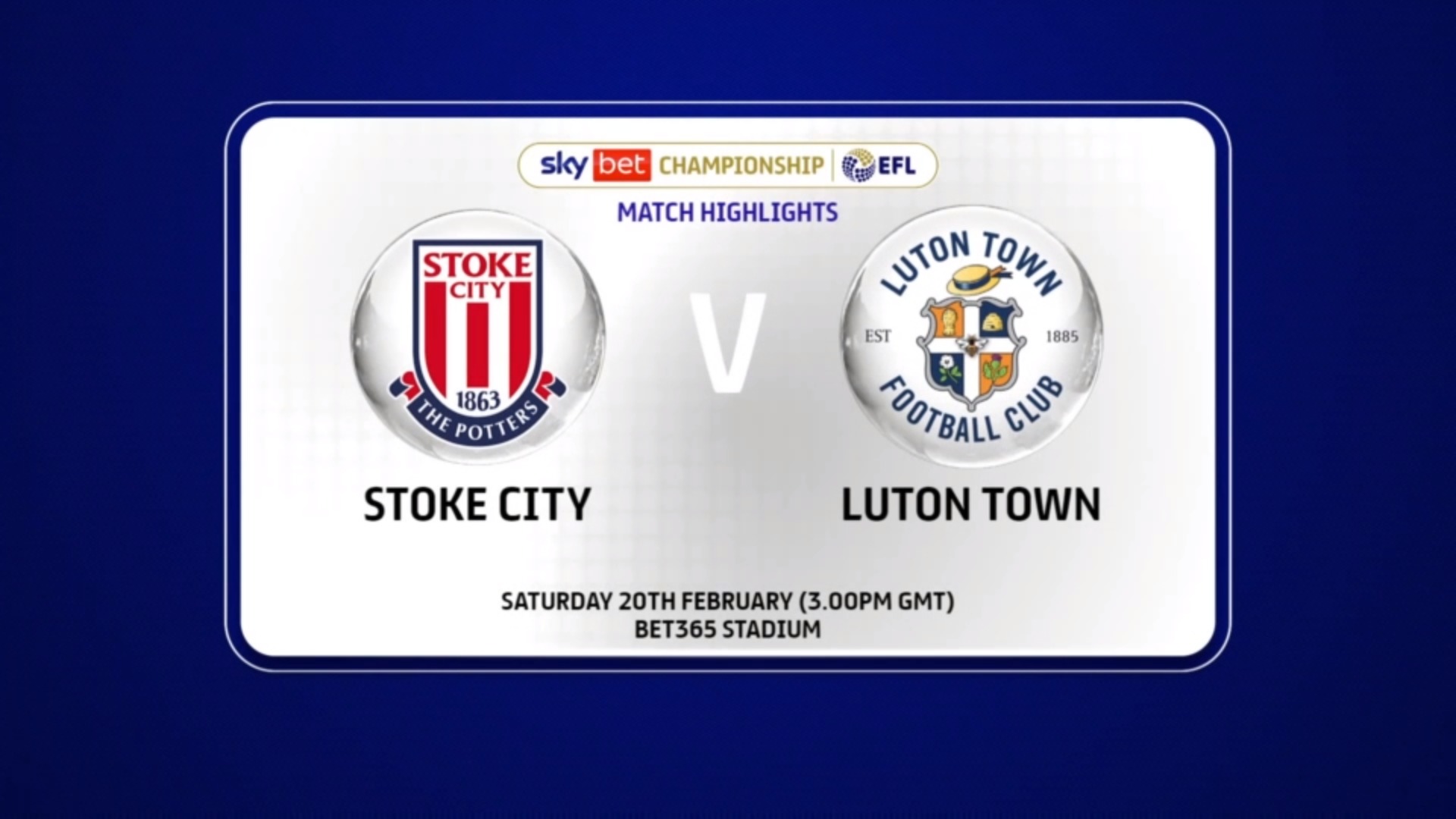 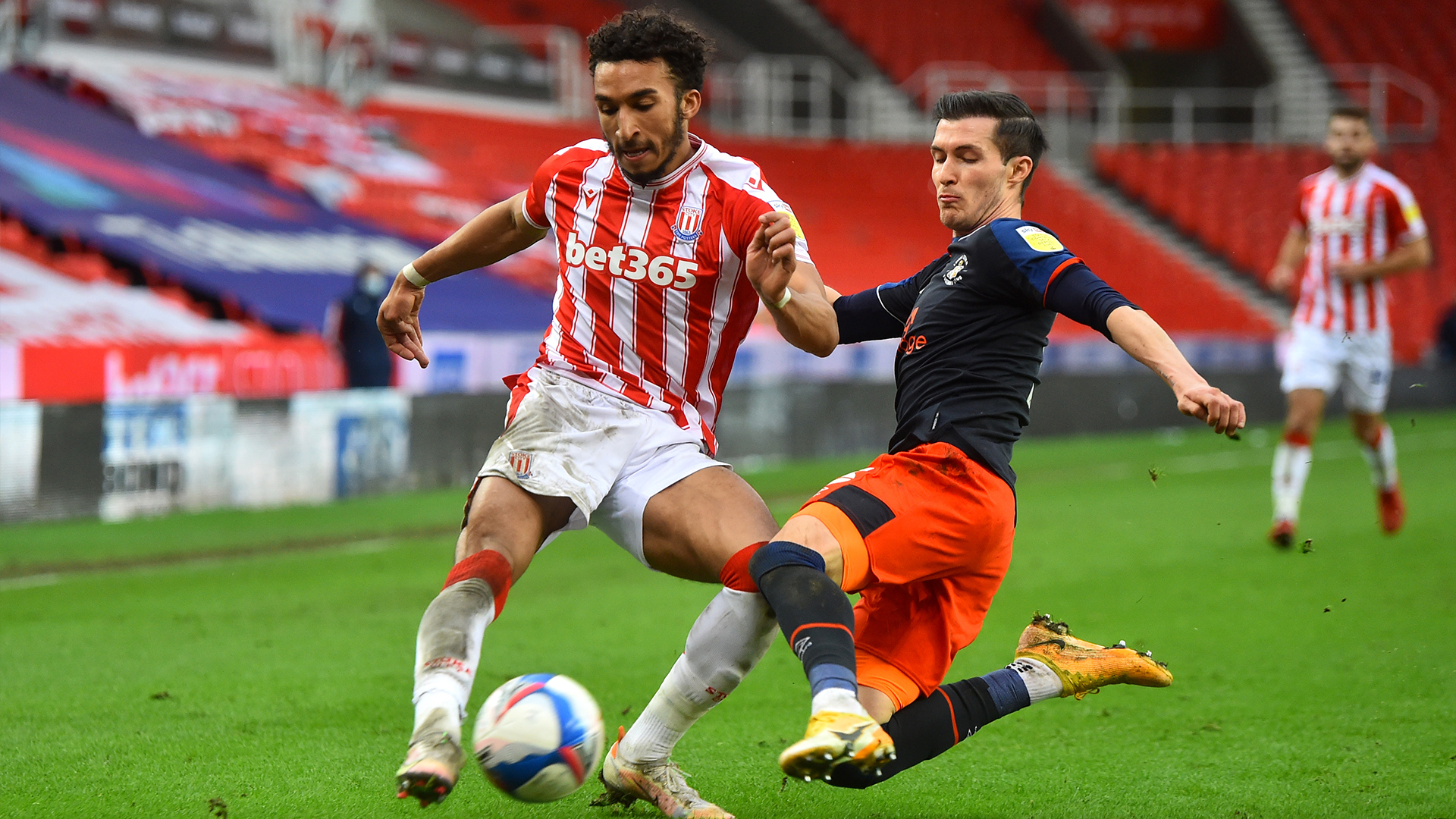