James Collins came off the bench to score the winning penalty with his first touch and secure the Hatters a first derby victory over Watford for 18 years!

Nathan Jones' side wrote themselves into Luton Town folklore with a completely dominant performance against the promotion-chasing Hornets, recording the first derby win at home since August 1993.

The win mathematically guaranteed Championship football for next season, taking the Hatters onto 56 points - five more than last term with five matches still to play.

After making a vital contribution from the bench against Wycombe Wanderers last weekend, Jones brought Kiernan Dewsbury-Hall and Kazenga LuaLua into the starting XI, with Harry Cornick picking up an injury in training ahead of the game and Ryan Tunnicliffe on the bench.

Dan Potts was back in the matchday squad for the first time since he was injured during the home defeat to Swansea City over a month ago.

Youngster and ex-Watford man Dion Pereira was named amongst the substitutes as the Hatters welcomed their local rivals to Kenilworth Road for the first time in 15 years.

The Hatters started immediately on the front foot, Adebayo and Mpanzu winning challenges in the first 20 seconds before Bradley met a Watford ball forward with a firm volley over the visitors' back-line for Clark to run onto.

Adebayo met the wideman's cross from the right with a downward header, and Berry tried an overhead kick, but couldn't make a strong enough connection and Daniel Bachmann collected by his post.

It was all Town in the opening stages, Bradley firing over from the edge of the box after Watford struggled to clear a third-minute corner, then Mpanzu and LuaLua dancing past their men on either side of the box and crossing, without a finishing touch.

Bradley headed over from the Hatters' third corner of an opening nine-minute period that was played exclusively in the Watford half, then Berry fizzed another dangerous cross in from the left that flashed across Bachmann's six-yard box and past the far post.

The Hatters should have had the lead on 19 minutes when, after Clark was fouled to the right of the area, Dewsbury-Hall whipped in a low cross that again found Bradley. The captain stabbed a volley goalward and it was just too high for Naismith to turn in from a couple of yard out, ending inches the wrong side of the post.

Dewsbury-Hall was next to have a go, his low right-footed shot from 20 yards having Bachmann scrambling across his line, but it was narrowly wide once again.

Watford captain Will Hughes had their first shot in the 25th minute, gaining possession after a rare slip by Dewsbury-Hall in the middle of the Town half, but his 25-yarder flew safely over Simon Sluga's crossbar at the Oak Road end.

A minute laterr the Town were knocking on the door at the other end again, Clark and Mpanzu combining to send Bree racing to the right byline, and Bachmann did well to deny Berry racing in at his near post.

Bradley was booked for pulling Ismaila Sarr back and Philip Zinckernagel sent a short free-kick, knocked to him by Hughes, straight into Sluga's arms.

The Croatian released Adebayo and his arced ball over the Watford defence seemed to set Berry clear, but Bachmann raced off his line to deny the midfielder, who was penalised for handball when controlling it in any case.

With half-an-hour gone, Clark and Mpanzu were causing problems down the Town right again, the former sending in an inviting cross that begged to have an orange head on the end of it, then Pelly gathering the loose ball on his chest and volleying powerfully over the bar from six yards.

It was Bree's turn to drive at the visiting defence on 34 minutes, setting Clark free to deliver low into the six-yard box again, only for Bachmann to collapse on the ball.

Two minutes later it was Dewsbury-Hall's turn, after LuaLua had rolled the ball back into his path a couple of yards outside the area. The on-loan Leicester midfielder's first-time shot looked destined for ther top corner, only for the natural bend from left to right to take it millimetres past the far post.

Pearson headed over on the stroke of half-time as an opening 45 minute period in which the Hatters did everything but score drew to a close.

Watford made a change at the break, introducing Isaac Success for Zinckernagel, but it was as you were for Jones who would have sent his side out with instructions to keep up the intensity, work-rate and first-class passing game.

The opening quarter-of-an-hour was a more even affair, but LuaLua had just gone past his man and called Bachmann into action with a low cross into his six-yard again when Xisco Munoz brought on Tom Cleverley for Carlos Sanchez on the hour.

The Hatters' next attempt came in the 68th minute, but it was one Naismith won't want to be reminded of as his 25-yard free-kick, after Clark had been fouled, landed on the roof of the Oak Road!

Adebayo got on the end of Dewsbury-Hall's deep free-kick soon after, but couldn't direct his prodded effort on target, then Bachmann had to push Bree's whipped-in free-kick from the left after LuaLua had been pushed to the floor by Kiko Femenia, the Watford right-back becoming their first player to be booked in the process.

Bradley headed over from the resulting corner, then Bree picked out Adebayo with another cross on the overlap, this time on his natural right side, but the striker's attempted volley ricocheted off his arm.

The former Walsall man was at the heart of the game's big moment in the 75th minute - and it woule prove his last involvement - as he read Achraf Lazaar's back-pass to Bachmann on the left side of the Watford area, got there ahead of the keeper, who wiped him out and was shown a yellow card by ref Ward.

Adebayo had to go off injured, and Collins came on in his place. The top scorer ran straight to pick up the ball to dispatch the penalty past Bachmann, who dived the wrong way, and ran off in celebration of his 12th goal of the season.

It was no less than the Hatters deserved, and as they came under the cosh at the other end as Watford sought an equaliser, Collins proved equally useful in his own box, heading clear after Clark and Dewsbury-Hall had thrown their bodies in the way of Watford efforts.

Femenia was soon seing red for a second yellow for another foul on LuaLua, then an offiside flag ruled out a 90th-minute header from former Hatter Andre Gray, who was in an offside position.

The Hatters, to a man, had been outstanding and managed to see the five minutes of added time out without an issue to confirm that Luton are 100 per cent safe in the Championship for another season.

And, two days after the seventh anniversary of securing a return to the Football League, we can definitely say that Luton are officially back! 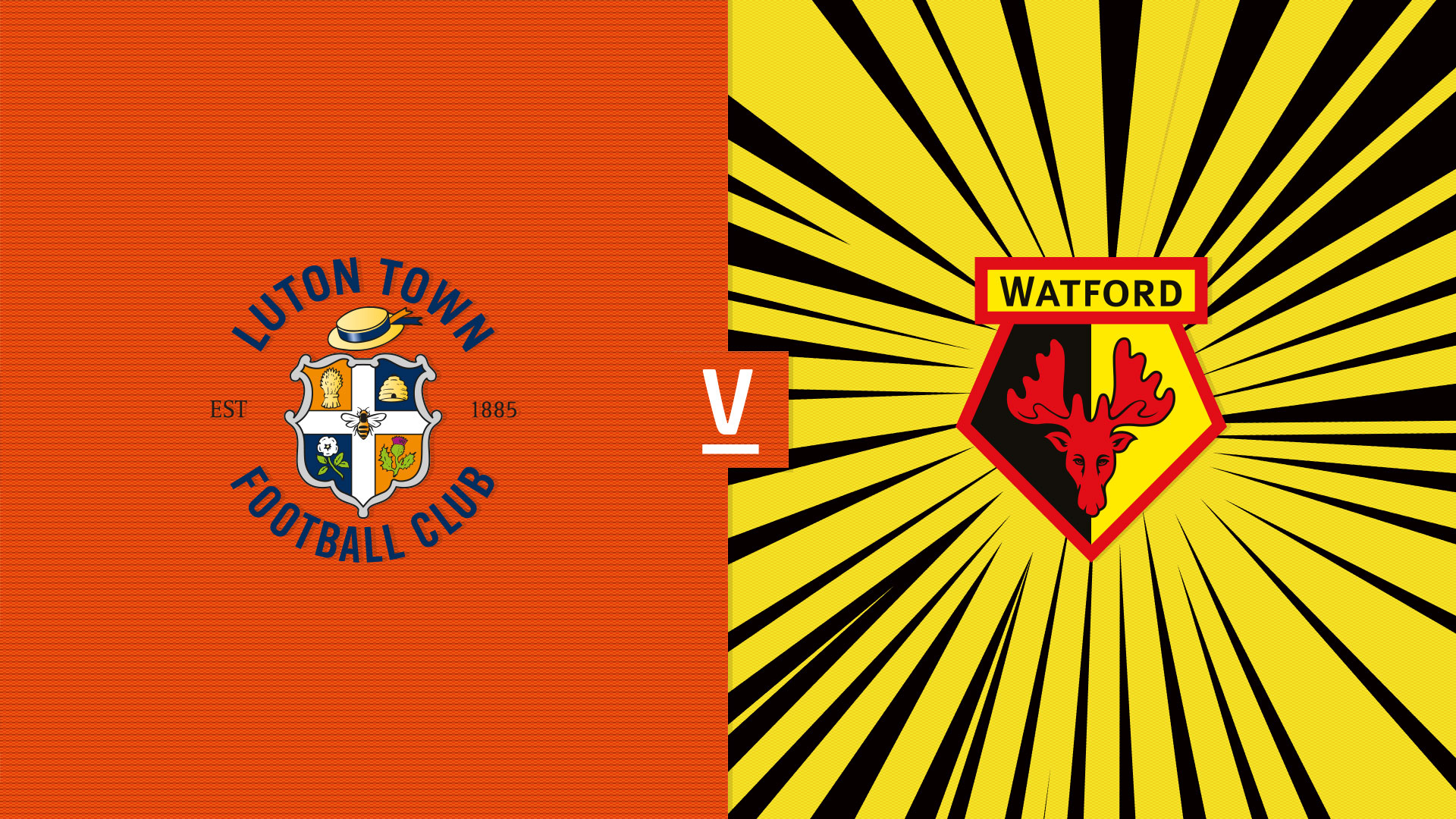 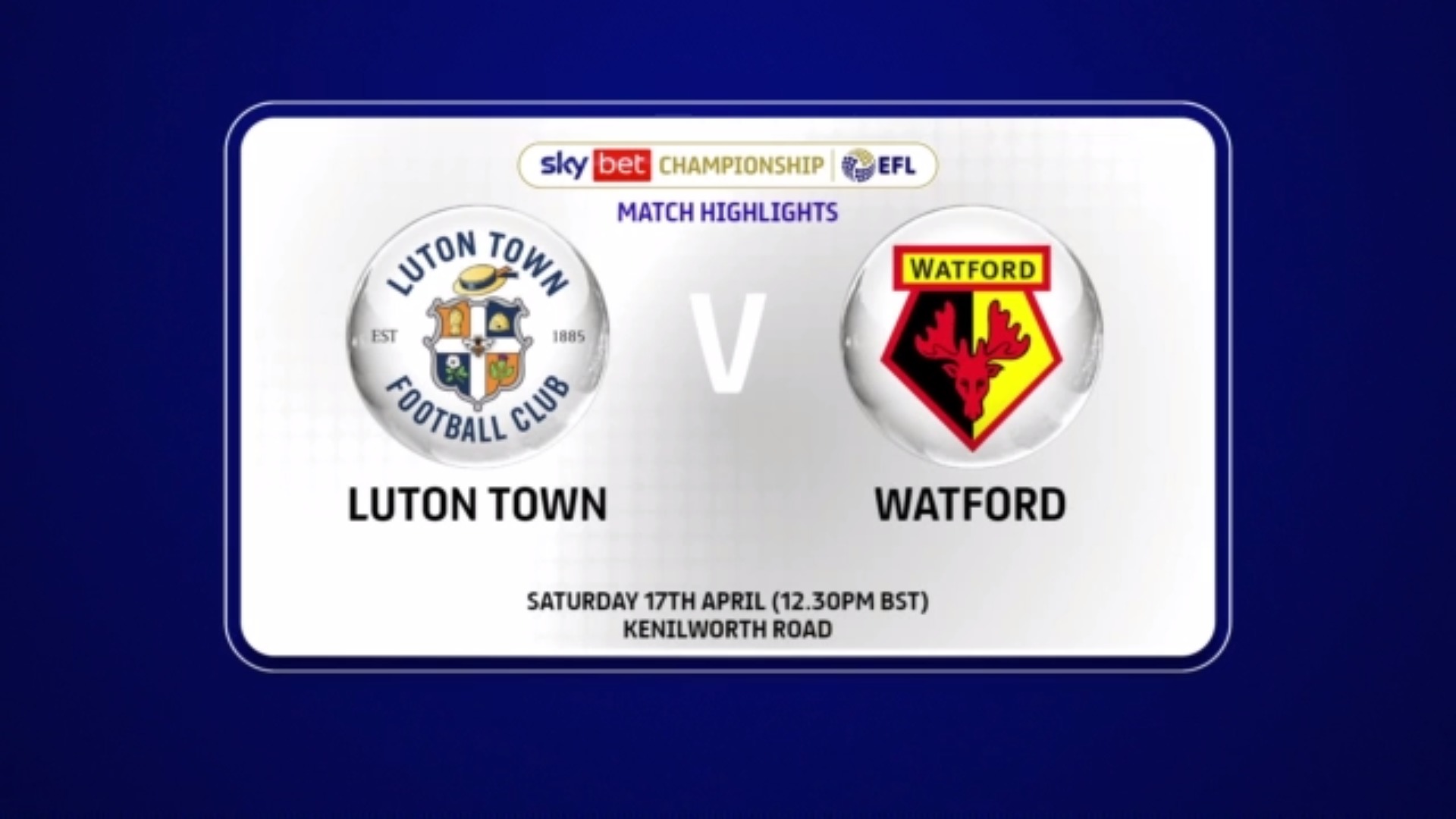 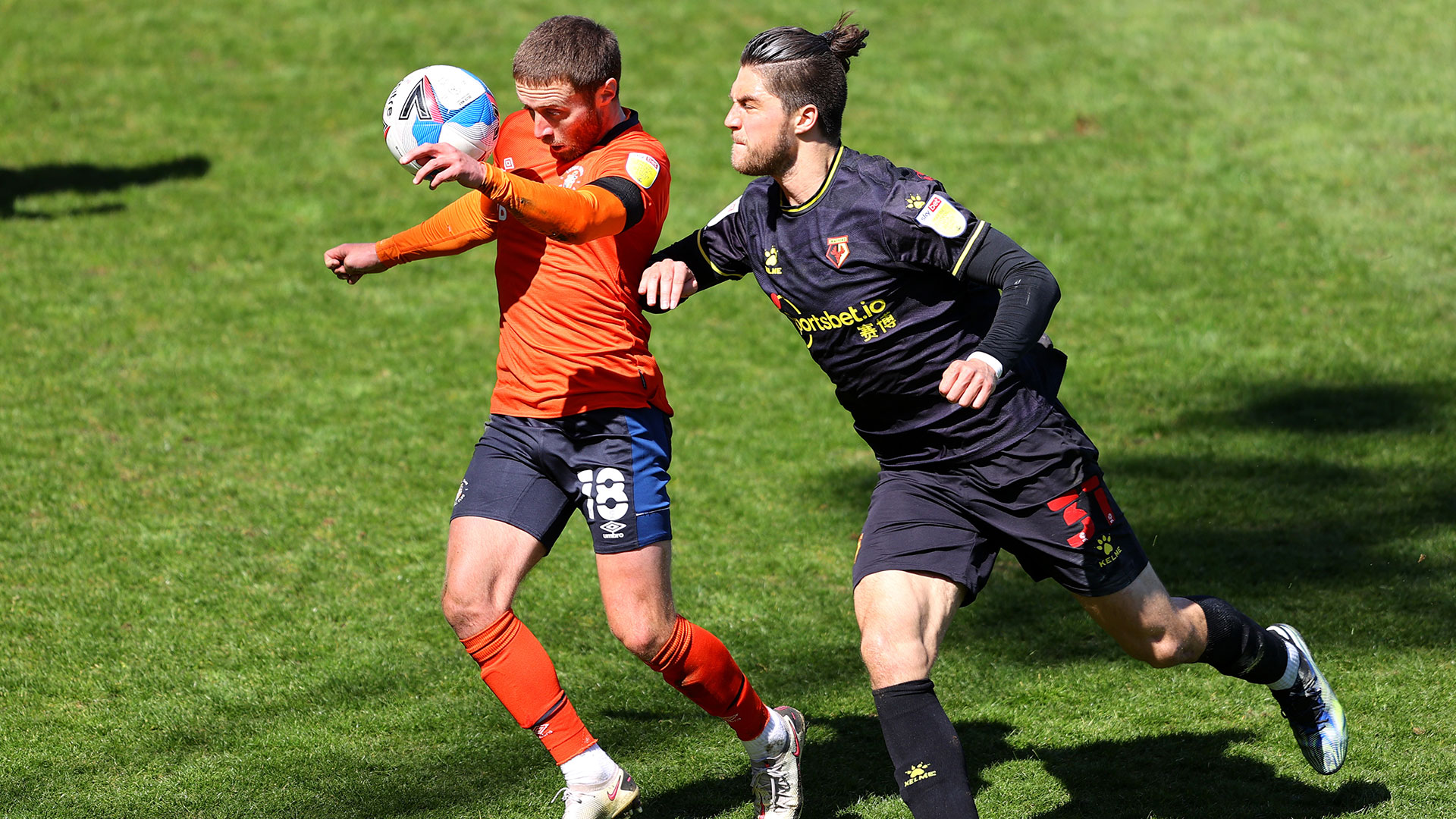