The Hatters are in Carabao Cup first round action tonight as they take on Sky Bet Championship side West Bromwich Albion at The Hawthorns.

The game marks the end of a three match run in which the Hatters have consecutively faced former Premier League teams.

After the defeat to Portsmouth on the opening day, they drew with Sunderland on Saturday, before taking on the recently relegated Baggies tonight. Please note that the game will kick off at 8PM.

Town went out at this stage of the competition last season as they were defeated 2-0 at home by Ipswich Town, courtesy of a brace from David McGoldrick.

Tonight's hosts went out in the third round last year, having seen off Accrington Stanley in the second, before Pep Guardiola's Manchester City beat them 2-1 at The Hawthorns.

Darren Moore's side have had a mixed bag of results in their opening three Championship games – a defeat on the opening day to Bolton Wanderers was followed by a draw at Nottingham Forest, before they got their first win of the season on Saturday in a dramatic 4-3 victory at Carrow Road.

On his side being the underdog: "I relish testing myself, and my team and our club against higher league opposition – we've always enjoyed that – and it's a wonderful place to go. The atmosphere at The Hawthorns and the fans that they have are superb. It's always good to test yourself, and we'll know where we are, and what we need to do. We need to improve, we know that, and those are all learning curves that we're having week in, week out at the minute."

On the side he will select for tonight's game: "We have to make sure that we plan. We are looking at the month and we have to take every game individually, as it comes, but we also have to plan because you can't just flog 11 players for six games in this month and hope that you get through.

"You have to get some continuity, yes, but you also have to make sure that you use your squad, and that's what we'll do. We'll go there with as strong a squad as we feel that is needed. We can't go there and make 11 changes, because with all due respect they are a fantastic football club and we'll treat the tie with the respect it deserves."

Has Nathan faced Darren Moore as a player before? "I think I did, but I probably kept away from him on the pitch. He was a terrific player for West Brom and he's been given an opportunity after doing really well at the end of last season, so they'll have aspirations of getting promoted straight back to the Premier League and they have a squad that is definitely capable of doing that."

On West Brom's squad: "I think they've lost one or two, the boy Rondon has gone, but the nucleus of the side is still there. I watched them at Forest in midweek and that was the same team that played in the Premier League. They've added Dwight Gayle, which has been a real strong addition for them, and they are full of Premier League experience, so it's a PL team we are up against really, but obviously they've come down."

Tonight's hosts have lifted the League Cup on the same amount of occasions as the Hatters – the Baggies winning the competition in 1966. They were also runners-up in 1967 and 1970. Their eight-season stay in the Premier League came to an end in May as they were relegated, finishing bottom of the table. But there is hope of an immediate return – new boss Moore saw his side go on a decent end of season run, which they will be looking to carry into the new term. They currently sit eighth in the second tier after three games.

Kick-off is at 8pm at The Hawthorns on Tuesday 14th August.

Tickets are available from the Luton Town Ticket Office until 2pm today at advanced ticket prices. Subject to availability, they will be available for purchase on the night at West Brom at an increased price. For all the info, please click here.

Tonight's game will be refereed by Robert Jones, who has taken charge of two Championship games so far this season, handing out ten yellow cards. His last match involving the Hatters was the 3-0 defeat at Kenilworth Road in October last year to Coventry City.

The last time we faced the Baggies was back in October 2016, when the Hatters defeated them 2-0 in the Checkatrade Trophy. Alex Gilliead and Jake Gray grabbed the goals for the Town. That was the 43rd meeting between the two, with Town winning ten, drawing nine and losing 23.

The main blow-by-blow account of the action from The Hawthorns will be provided via the Match Centre on the club website, which you can access by clicking here. (*Please note that the club's Live Text will appear only by accessing through an internet browser, users of the Luton Town FC app will receive updates from Opta...the EFL Digital team assure us they are working on a fix to get club updates onto the app)

Please be aware that tonight's game will NOT be available for overseas subscribers to watch live. 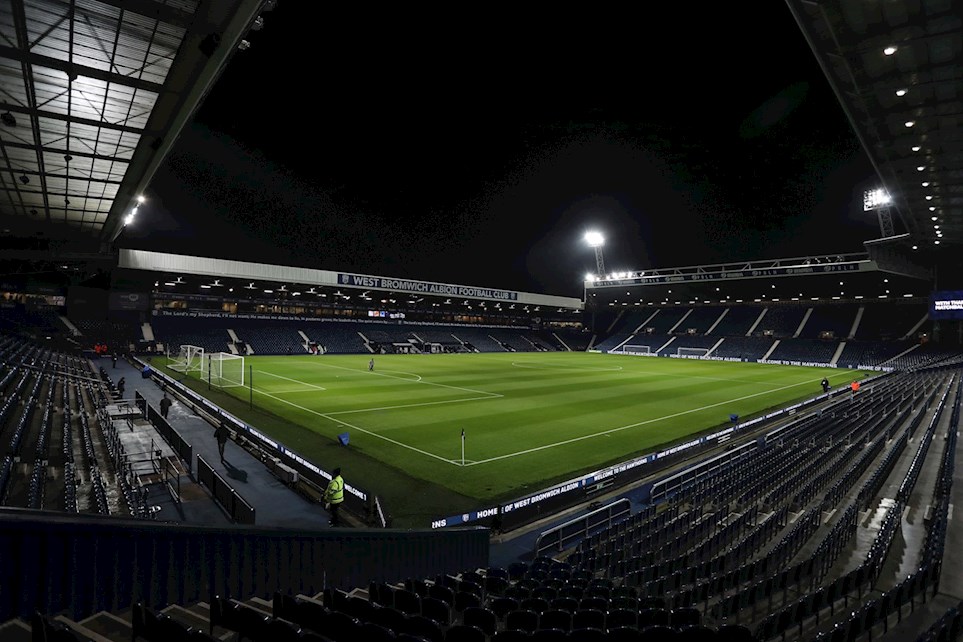 
As another element of EFL fixture release day, we can confirm that with the TV selections for the Carabao Cup first round now having been made, our tie against West Bromwich Albion will take place on...

The Hatters were knocked out of the Carabao Cup at the first round stage tonight, losing 1-0 at Sky Bet Championship big guns West Brom, but there was plenty of reason for Town fans to cheer at the Hawthorns.

A goal from Scotland international Oliver Burke, a £15m signing from Bundesliga side RB Leipzig, just after the hour proved enough for the side recently relegated from the Premier League to see off Nathan Jones’ Luton, who have only just gone up to League One.

But the travelling fans got to see their side turn in an accomplished performance, taking the game to the Baggies and at times troubling a side packed with internationals and top-flight experience, and if front two Jake Jervis and Harry Cornick had taken first-half chances, the final score might have proved different.

They also, perhaps more importantly for the Hatters’ hopes this season, got to see midfielder Luke Berry back on a pitch for the first time since suffering a dislocated ankle and fractured fibula on Good Friday, as his remarkable rehabilitation concluded three months earlier than expected with a 12-minute appearance as an 83rd-minute sub.

Jones made eight changes from the side that drew 1-1 with Sunderland on Saturday, with James Shea in goal behind a back four of Jack Stacey, Matty Pearson, Sonny Bradley and James Justin.

Glen Rea was named captain in the role in front of the back four, with Pelly-Ruddock Mpanzu and Luke Gambin wither side of him in the midfield diamond and Andrew Shinnie at the tip, behind a front two of Jake Jervis and Harry Cornick.

The Hatters had the ball in the back of the net early on, Gambin’s close-range effort was ruled out for offside, before Justin stretched the Albion back four down the left, his 11th-minute cut-back for Jake Jervis intercepted at the near post.

Town were enjoying their fair share of possession and Bradley directed a 23rd-minute header from Gambin’s corner straight at Albion keeper Boaz Myhill, then Jervis dragged a left-footed shot past the far post after James Justin found him on the edge of the Baggies’ area.

Albion could, and probably should, have taken a lead into the break however after Wales international Hal Robson-Kanu found himself in some excellent positions.

First, around the half-hour mark, he received a ball from Matt Phillips just inside the area and turned Pearson, but Shea was quickly off his line to save with his feet, before a glancing header went well wide of the far post.

Mpanzu showed great strength in midfield to brush Tosin Adarabioyo off the ball, then continued his run to meet Shinnie’s 33rd-minute cross with his chest, an effort that was on target and turned behind by Myhill, although the corner came to nothing.

In the 37th minute Robson-Kanu sprang the offside trap and went through one-one-one with Bradley, but took his shot early straight at Shea, then Harvey Barnes ran at the Town defence and tested the keeper from 25 yards, but Shea again saved well.

Phillips’ clever throw on right caught Justin out two minutes before the break, Burke cutting back from the byline for Robson-Kanu, but again, the striker’s header was well off target.

Cornick also had a good chance for the Hatters a minute before the interval, but dragged his right footed shot across Myhill and the Albion goal.

West Brom made a couple of changes at half-time and came flying out of the traps, but couldn’t create anything and it was the Town who went closest in the 52nd minute, Pearson climbing highest at the far post to meet Shinnie’s corner, but the centre-back couldn’t keep his header down.

The hosts had the lead by the 62nd-minute, however, when Pearson’s sliding challenge 30 yards from goal ricocheted into the path of Burke, the former Nottingham Forest and RB Leipzig forward, who slipped the ball past the advancing Shea from the edge of the box.

Jones immediately brought Lloyd Jones on for Gambin and switched to a back three, but his side found it difficult to penetrate the Baggies’ defensive line, Rea’s 30-yard drive in the 71st minute, after good pressure down the right by Cornick, only troubling the 1,175 travelling Hatters in the Smethwick End behind the goal.

Those Hatters fans sang all night, but the biggest cheer undoubtedly came when Berry came on for Rea in the 83rd minute, 137 days after suffering that horrendous injury.

‘One Luke Berry’ they sang, just as they had that day at Colchester. There wouldn’t have been a Town fan anywhere that wasn’t smiling, despite the result – which might have been taken to penalties had Jervis been in inch taller to get a clear header on Elliot Lee’s injury-time corner.

The Hatters were beaten, but by no means downhearted.


As another element of EFL fixture release day, we can confirm that with the TV selections for the Carabao Cup first round now having been made, our tie against West Bromwich Albion will take place on...