The Town will look to give the near 4,500-strong travelling fans a final-day to remember by going out in style when they face Notts County at Meadow Lane this Saturday.

The Hatters go in to this game in a rich vein of form having secured their promotion to Sky Bet League One two weekends ago at Carlisle, then cruising to a 3-1 victory last week against Forest Green Rovers in their final home game of the season.

The Town are in fine form, with four wins and that draw at Brunton Park earning manager Nathan Jones a third Sky Bet League Two manager of the month award of the season in April.

Notts County are currently sitting in fifth place in the league and are coming off the back of good run of form despite a loss last weekend away at Grimsby Town, with their place in the play-offs assured. The Magpies will be looking to get the win that will book them home advantage in the second leg of the play-off semi-final. 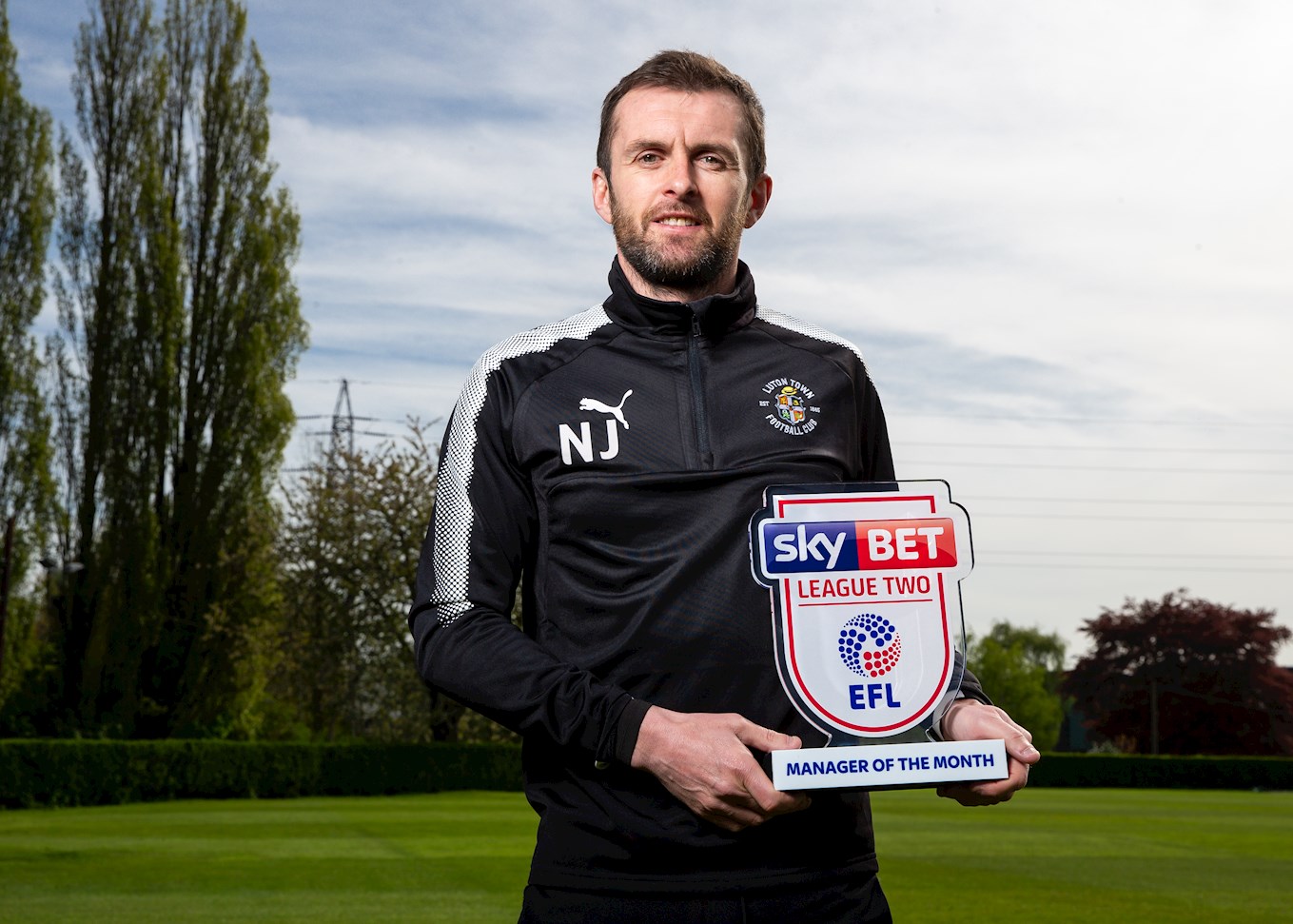 On the occasion: “You’ll only enjoy it if you do well, but it’s a wonderful occasion. We’ll be taking a big amount of fans with us as well. As I said it’s a time to enjoy it, but we want to do well.

“Look we’ve been tested, they’re a good group, they’ve trained really well so nothing changes. I’m glad we haven’t got to go there having to win, so we won’t disrespect that luxury in any way, but we’ll go there and be right at it.”

Looking ahead to next season: “We know who we’d like to bring in, we’ve earmarked targets, but I don’t want to be disrespectful because some teams have still got things to play for.

“We’ll embark on that when everyone’s season is done or the ones that we’re interested in are done. With us obviously we have to speak to our players first, because we have a number of ones that are out of contract.”

The trip to Notts County and Meadow Lane is nearly a 200-mile round trip. Notts County have considerably improved since last season, when the Magpies finished 16th in Sky Bet League Two.

Kevin Nolan took over as manager in 2017 and has been a crucial part of their rise. The Magpies started their season very strongly in a similar vein to the Town, losing just one game in their opening ten.

County have shown this year how good their home form can be, winning 14 and losing just two of their 22 games so far, so the Hatters will face a stern test when they take to the pitch at the oldest Football League club in the world.

Kick-off is at 3pm on Saturday 5th May at Meadow Lane.

The Hatters’ allocation of 4,498 tickets for this fixture sold out a couple of weeks ago.

Today, they have also requested on their website that fans do not go on the pitch after the final whistle: "To ensure the playing surface remains in the best possible condition and to allow both sets of players to acknowledge their supporters after full-time, Notts require all fans to stay in the stands after the full-time whistle."

We ask all Hatters supporters to respect this request from the Meadow Lane club.

Notts County visited the Kenny at the beginning of December for a 1-1 draw that Hatters boss Nathan Jones coined as a “fair result” (see highlights below). Town defender Johnny Mullins headed in for his first goal of the season with the half-hour mark approaching, before Shola Ameobi equalised midway through the second half.

Of the 71 games that the sides have played against each other over the years, the Town have won 35 while Notts County have only won 16 of the meetings. However, in the five fixtures since we returned to the EFL, County have had the rub of the green, winning two with Town only winning the once. Our last trip to Meadow Lane in October 2016 finished goalless, with Christian Walton pulling off a wonderful late penalty save to deny Vadaine Oliver a winning goal (see below).

You can follow the Hatters' Twitter feed on @LutonTown, or stay up to date on the LTFC website in the match centre. iFollow Hatters subscribers can tune in for Simon Pitts' match commentary, whilst international subscribers can watch the game live. You can subscribe to iFollow Hatters by clicking here and supporters who are overseas can buy an individual match pass for the live video stream via the Match Centre.

The Hatters’ Sky Bet League Two promotion-winning season ended with a goalless draw at Notts County in front of almost 4,500 travelling fans on another memorable afternoon for Luton Town.

Nathan Jones’ men have had their League One slot for next season sorted for a fortnight, but they didn’t take their foot off the gas on a sweltering day in Nottingham and could have sealed a fifth victory in six unbeaten games to close the campaign, despite Danny Hyton’s second-half dismissal for two yellow cards.

As it was, a first nil-nil since the trip to Crawley in mid-October brought the season to a close with the Hatters’ 88 points and 94 goals taking the club back to the status they last played at a decade ago as runners-up to Accrington Stanley.

After the game, Jones and his squad celebrated with the fans – and received a terrific ovation from the home fans who had stayed behind to acknowledge their own side, who now have to face the play-offs with home advantage for the second leg of their semi-final guaranteed by a fifth place finish.

The Town’s first attack of any real intent started with Pelly-Ruddock Mpanzu deep inside his own half, killing the ball with a great touch and setting James Collins away down the right, but the striker’s whipped cross just eluded partner Danny Hylton in the six-yard box.

A minute later, with nine gone, it was the hosts’ turn to launch a counter-attack from deep, Jonathan Stead firing in a low cross that similarly just missed his onrushing team-mates after Jonathan Forte had set him away down the left from inside his own half.

The first shot on target came in the 11th minute, when Elliot Lee teed up his brother, Olly, for a 20-yard blast that County keeper Adam Collin did well to beat away.

Captain Alan Sheehan, who received a standing ovation from both sets of fans as he went to take his first corner of the game, had to be alert to prevent Matty Virtue getting on the end of a knock-down from Stead in the 17th minute, with Glen Rea on hand to clear the remaining danger.

The Hatters were making inroads on the home defence, however, and Elliot Lee set Jack Stacey racing past left-back Dan Jones, only for the Town right-back’s cross-shot to fizz across goal with Hylton and Collins both waiting for a tap-in.

The Town’s young players of the year did well in his normal defensive role in the 23rd minute to get a block on Stead’s shot, then Shea did well to hold a Jorge Grant effort from distance in the 25th.

Jones’ side were playing some lovely football, however, and after Stacey once again found himself in the Notts penalty area to get a shot away, this one deflected wide, Elliot Lee took the ball off Mpanzu on the edge of the box and fired in a right-footed shot that was tipped over by Collin.

After a spell of lengthy possession which the Town fans greeted with oles, Hylton got on the end of a 34th-minute cross from Colllins, but his flick ended up hitting the side-netting.

Hylton picked up a yellow card just before half-time and teams went in goalless at the break, but it was the Hatters who started the second half on the front foot, Elliot Lee carrying the ball from halfway and getting it back inadvertently when his attempted pass to Collins was half-intercepted, only to see his left-footed shot hit the side-netting too.

The 12-goal forward went closer still in the 54th minute, Collin getting down low at his near post to keep his stabbed effort out, before he sent a 25-yarder inches over the crossbar.

Town were reduced to ten men just before the hour when Hylton was shown a second yellow card after a coming together on the near touchline with Shaun Brisley, but it didn’t affect the way Jones’ side attacked.

After Olly Lee and Sheehan threw themselves in the way of a couple of County shots at one end, Mpanzu and Collins combined to release Stacey down the right once more, but the full-back’s shot once again went just past the far post.

Mpanzu was always carrying a threat, and with 71 minutes gone the midfielder burst along the right byline, but Collins couldn’t get a shot off from his cut-back and Notts’ defence cleared the danger.

Double player of the year Sheehan was having another inspired game at the heart of the Hatters’ defence, and the Irishman did well to block another effort from his former club when he threw himself in front of Lewis Alessandra’s 20-yarder soon after the County sub had come on.

Jones introduced his first sub, Harry Cornick, with just over ten minutes to go and the forward almost got on the end of another Jack Stacey cross, then another great move saw Collins play Mpanzu in on the left of the box, but the midfielder’s shot was deflected behind for a corner.

Sheehan went over to take again, and Rea met this one with a firm header that whistled just past the far post, before Rea’s long ball cleared the County defence and Collins looked to be in the clear, only for his first touch to let him down as he bore down on Collin in the home goal.

Grant fired a free-kick over the bar with 90 minutes up, after Sheehan was booked for a foul on the edge of the box, then McCormack hit one just wide as the Town finished the game comfortably.

Runners-up, automatic promotion secured. Job done for Jones and his team who now have an open-top bus tour of Luton tomorrow with their journey to League One complete. Come on you Hatters!