The Hatters head to Bedford Town tomorrow afternoon as preparations for the 2017-18 campaign crank up with Nathan Jones taking his first-team squad to the Eyrie ahead of a week-long training camp in Slovenia.

The Town boss has included all seven of his summer signings in the group visiting our Evo-Stik League Southern Division One Central neighbours for the 3pm kick-off. 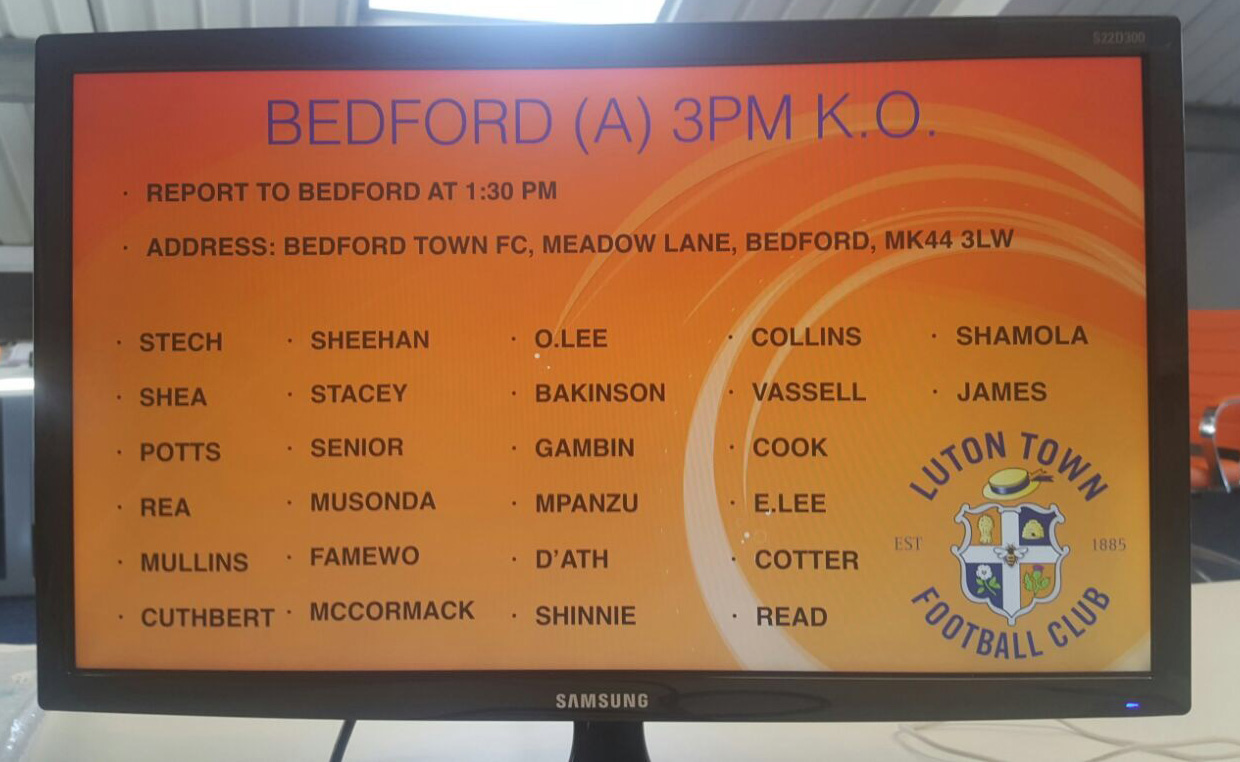 "It’s a first team fixture. Everyone will get game time from our squad. We’ve been fortunate enough that only James Justin’s still got a bit of fatigue from England duty, so he probably won’t feature, and then Hylts is recovering nicely from his op, so we’ll be a real strong outfit at the weekend, and we are looking forward to the game to get them back to it. We’d like to stay injury free and to have a real good workout, which takes us into a real important week in Slovenia."

Managed by Jon Taylor, the Eagles finished eighth in their league at Step 4 of the Non-League pyramid last season, missing out on the play-offs by a couple of places. Taylor has been strengthening his squad to better that in 2017-18 and had a busy evening at their seventh pre-season training session on Thursday, introducing four new signings – Dylan Gittens, George Brinkman, Ryan Auger and Ronayne Marsh-Brown.

Kick-off is at 3pm on Saturday 8th July at the Eyrie. The address for the ground is: The Eyrie, Meadow Ln, Bedford MK44 3LW

Adults can get in for £9, with concessions and 16-21-year-olds at £6 – although the Bedford website stresses you may be asked for ID! It’s £3 for juniors aged 10-15 years, while children under-10 go FREE! Turnstiles are open from 1pm and it’s all pay on the day, cash only.

You can park your car for £1 in the club’s two main car parks, with disabled parking on a “first come, first served” basis. The Eagles advise that stewards will be around to help, however, is spaces are filled.

The Hatters travelled to the Eyrie last year on 16th July for the first pre-season friendly on home soil after a goalless draw with Paksi in Hungary the previous week. Goals from Dan Potts, Josh McQuoid, Cameron McGeehan, Danny Hylton, Zane Banton, an OG and an 11-minute Jack Marriott hat-trick gave the Town a 9-0 win.

We will once more trial the Live Text feature in the Match Centre on the new club website, with the EFL’s digital partners working this week to iron out the glitches that saw match updates appear out of sequence at Hitchin in midweek. We will also operate the usual Twitter feed too…@LutonTown

The Hatters first team got their pre-season campaign underway with victory this afternoon – but they were made to work hard for it by Non-League neighbours Bedford Town.

The Evo-Stik League Southern Division One Central side were a completely different proposition to the team who had nine put past them by the Town last July, and they took a tenth-minute lead through Lee Roache.

But a first goal in a Luton shirt from recent signing James Collins and a second-half penalty from Dan Potts was enough for the Nathan Jones’ men to come out on top in front of a crowd of 1,279 at a sun-baked Eyrie.

The Hatters boss went for two different line-ups in each half – with six of his seven new signings starting the first period.

Bedford took a surprise lead when winger Kyjuon Marsh-Brown dispossessed one of them, Alan McCormack, on the Bedford left and raced to the byline, to cut back for Roache to fire home from close range.

Home midfielder Ryan Auger then tried his luck from the halfway line, although his effort flew inches over the bar as new keeper Marek Stech back-pedalled.

The Town had already created good early headed chances for Pelly Ruddock-Mpanzu and Scott Cuthbert, with Andrew Shinnie – signed on a season-long loan from Birmingham – delivering both set-pieces.

And Jones’ side were level by the 22nd minute when Collins pounced on a loose ball in the box after Elliot Lee had challenged the two home centre-halves. The recent singing from Crawley needed no second invitation to tuck the ball past Eagles keeper Adam Harpur.

Former loanee Lee – signed permanently from Barnsley – had three half-chances, first a shot from the edge of the box that Harpur got his body behind, before a looping header that the keeper plucked from the top corner preceded a snap-shot on the turn that flashed past the woodwork.

Centre-half Johnny Mullins headed a 34th-minute Arthur Read corner down into the ground and over the bar in between as the Town finished the first half strongly.

After the break, Jones brought on a completely new team – one that was more familiar to Town fans with keeper James Shea the only new signing left to be introduced.

Luke Gambin came close to grabbing the lead within five minutes, but Harpur got a hand on his attempted chip and his defence managed to prevent Lawson D’Ath putting the ball into an empty net.

Bedford reminded the Town they could still pose a threat on the break as Roache latched onto a long clearance from the back four to crossed for Kyjuon Marsh-Brown, who hooked his effort over Shea's crossbar.

Then Auger attempted to catch Shea out at his near post with a 61st-minute free-kick, but by the 72nd minute the Hatters were in the lead – Potts winning and coverting a penalty after his surging run down the left was halted by Paul Cooper.

Isaac Vassell, with a powerful turn and burst to the right byline, set Gambin up for a chance to extend the advantage with ten minutes left, but the Malta international couldn’t connect cleanly with his shot.

A single goal advantage was enough to secure victory, but more importantly it was a tough test with Jones’ squad emerging injury-free before flying out to Slovenia tomorrow morning for a week-long training camp and next Saturday’s match with NK Bravo.